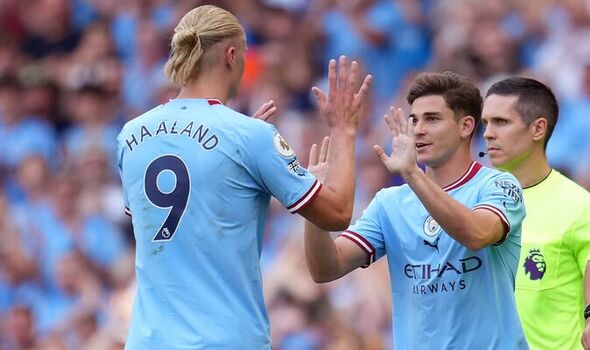 Pep Guardiola has told Manchester City fans not to worry when he decides to rest Erling Haaland – insisting Julian Alvarez will not let anyone down. The City boss warned the Norway international will not be able to play every game when a “crazy” schedule of Premier League and Champions League kicks in next week.

But he maintained he had every confidence that his understudy Alvarez will not fluff his lines when he gets the call. “When Erling doesn’t play we are going to play Julian for sure,” he said.

“And we have all been impressed with what we have seen of him so far. Erling is 22 years old so he’s young and recovers well. I think he is able to play quite regularly. But we will make decisions game by game and see what happens.

“When it is four days between these games against Crystal Palace and Forest, then three days for Aston Villa and Sevilla, then three or four days for Tottenham. Maybe that will be different. With travel for the recovery it is much much worse.”

Haaland is likely to lead the line against Nottingham Forest tonight and will be looking to add to an already impressive start for the club. His stunning second-half hat-trick against Crystal Palace last Saturday brought his tally to six goals in four games following his £51million summer transfer from Dortmund. 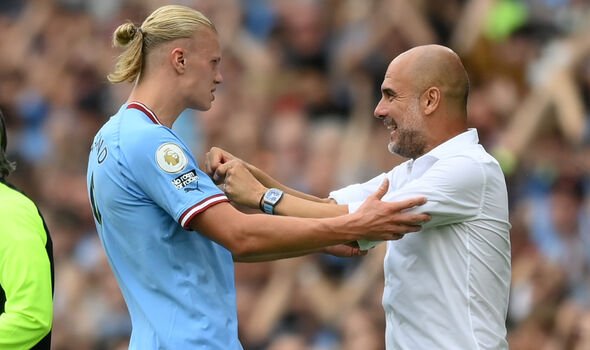 Alvarez arrived with far less fanfare five months after his January £20m signing from River Plate but has impressed Guardiola and his staff since joining the first team group. “With Julian I don’t have doubts. From day one we saw that he didn’t want to miss the opportunity, he want to do it well and that is so important,” said the City boss.

“He is so young, had incredible success in one of the most important teams around the world in River Plate and if he is able to do it there with this personality he can adapt wherever. I feel that he is going to help us in many ways.

“He is so strong, fast, and has an incredible sense of goal, he reads the game really well.” Guardiola says he will not hesitate to any of his stars if he feels it is for the greater good of the side.

“I don’t explain the reasons for my decisions. Some players understand it is part of it for everyone and the other ones never understand me. I don’t care. I do it for the best for the team to win the games and for many reasons and that’s all.

“I’m the manager, I’m being paid for that and they have to accept my decisions.” Manchester City are considering a last-minute bid for defensive reinforcements with Borussia Dortmund centre-back Manuel Akanji in their sights.

Injuries to Aymeric Laporte and Nathan Ake have highlighted scarce resources for Guardiola in the middle of defence with just Ruben Dias and John Stones fit. And the club see Akanji, 27, who is yet to make an appearance for the Bundesliga side this season, as a possible solution to the problem.

The Dortmund defender and Switzerland international, who has a year left on his current deal, has been valued at around £15million by the German club.