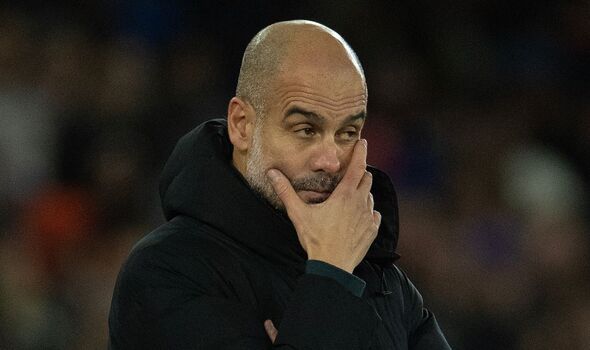 Manchester City boss Pep Guardiola has warned his players that failure to raise performance levels on Saturday against Manchester United will result in derby embarrassment at Old Trafford this weekend. The Premier League champions were on the receiving end of an unexpected humbling in the Carabao Cup quarter-finals as they were beaten 2-0 by bottom-of-the-table Southampton at St Mary’s.

A jaw-dropping long-range strike from Moussa Djenepo followed a brilliant opener from striker Sekou Mara to inflict the damage as the Saints now look forward to a semi-final clash with Newcastle.

But for serial League Cup winners City, they have now been dumped out of the competition before the final for a second successive season and Guardiola fears their dismal display could have consequences this Saturday when they meet much-improved rivals Manchester United.

“If we perform in this way, we don’t have a chance,” Guardiola said following the underwhelming, shock defeat.

Guardiola has already crazily hinted he is prepared to try something “ridiculous” when City square off with their rivals.

The Spaniard said: “I would like to arrive against United with the average of minutes in the legs of the players quite similar because I have a few ideas, thoughts, ridiculous ones against United.”

The City boss has finished above United in all six of his seasons in the Premier League since arriving at the Etihad in the summer of 2016.

He has also developed a reputation for experimenting tactically in City’s biggest matches – particularly in the Champions League.

“I don’t have a clear line-up against United,” Guardiola said. “I didn’t watch their last games. I have to see the way they play at home and if they change something.”

United, who were smashed 6-3 by City in October in the return fixture, have seemingly turned the corner following the departure of Cristiano Ronaldo in attack.

Since the Portuguese’s last game for the Red Devils – the 3-1 defeat at Aston Villa in November – United have won eight straight matches in all competitions.

Should they beat Manchester City, they would be just one point behind last season’s champions in the table.

The Red Devils have also had an extra day to rest following their 3-0 Carabao Cup triumph over Charlton at Old Trafford.

City lost an extra day of rest and preparation as they had to fly back to the North West following their defeat on the South Coast.

United have won all of their last nine matches at Old Trafford in all competitions with the stadium now considered to be a fortress once again.

“It’s by standards. By every day, living along high standards,” said Erik ten Hag when quizzed on how he restored the Old Trafford fear-factor.

“It’s by the team, building a team. Nobody is bigger than the team, everybody has to contribute to the team.

“That’s not about 11 players, but the whole squad. It’s the team around the team. All the staff – the medical staff, the performance staff, the coaches, the analysts.

“Everyone has one aim and they’re contributing to that and working hard for that with togetherness. When we keep this going, we can achieve a lot.”

Today at the World Cup: Croatia and Morocco prepare for third-place play-off