Home » Soccer » Pep Guardiola: My Barcelona managerial career is over

Pep Guardiola says that his managerial career at Barcelona is “over” and reiterated his desire to stay at Manchester City following a 1-0 win against Sheffield United.

Earlier this week, Barcelona presidential candidate Victor Font, who is the frontrunner to replace Josep Maria Bartomeu following his resignation earlier this week, told Sky Sports News he wants to bring Guardiola back to the Nou Camp while also holding onto Lionel Messi.

However, Guardiola, who spent four years in charge of Barca from 2008-2012, has dismissed the idea and says that he still wants success with City, with his current deal expiring at the end of the season.

After beating Sheffield United, he told BT Sport: “I’ve said it many times, my career as a manager at Barcelona is over. I think once in a lifetime you have to do these things and there are incredible people who can be in charge now. For example Ronald Koeman is an excellent manager, so it’s over.

“I’m still incredibly happy here [at Man City], I still have the desire to do well and this is the most important thing. “Now, there will be elections at Barcelona and hopefully they can choose the right people for the right board to maintain this incredible club at the highest level.”

He added later in his post-match press conference: “My career there as a manager was incredible and now Koeman is there, respect him please. He’s the manager, a real friend of mine.

“I’m getting old so to be manager at Barcelona, you have to have a special energy…That’s why it belongs to young people.”

Victory over Sheffield United means Man City are now unbeaten in their last seven games in all competitions and Guardiola was pleased with how his side have adapted to a busy schedule.

“It was our third game in seven days away from home,” he said. “We played a really good game with a tempo we need against Sheffield United. If you play rhythm where you don’t control, they punish you in the transitions because they are so strong in these areas, stronger than us.

“In the first half we played really well, we created a lot of chances. We are struggling already to score goals, one day we will unblock this situation…They had one clear chance in 90 minutes so that is so good for us in terms of how we defend but unfortunately, when we arrive in the final third, we’re not clinical as we were before.

“The reason why we conceded just one [shot on target] is not just the centre-backs, everyone made a contribution. We are delighted with how they are doing but against Olympiakos [in the Champions League on Tuesday] I have to think about how many changes or to rotate the team because it’s a lot of games, five games in 16 days, so I have to think about it.”

Wilder: We did not show enough to hurt City 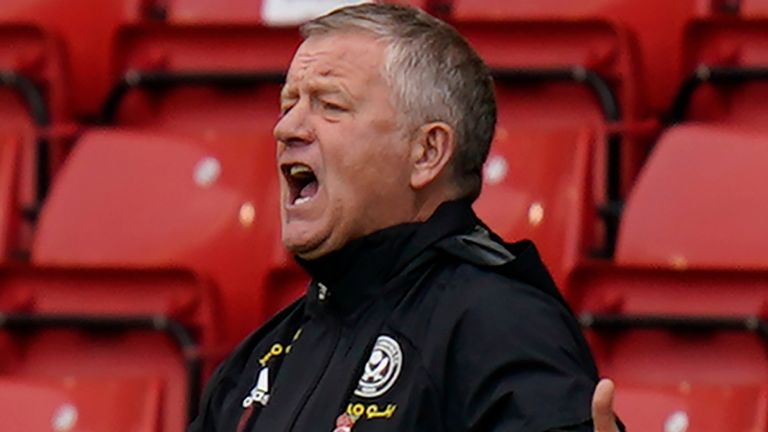 Although Sheffield United were improved in the second half, they only managed one shot on target and three overall, and manager Chris Wilder was disappointed from some sloppy play from his side.

“I think you’ve got to play at the top of your ability to get anything from the games against Man City and Liverpool and when we keep turning the ball over in the manner that we did when we were in good positions, good players keep it away from you and counter-attack on you and that’s what they did,” he said.

“I fancied us. I thought there was an opportunity to gain something from the game. We had to stay in the game at times, which I think everyone has to when they play Man City. You have to take your opportunities when they come because you’re not going to dominate possession and control a team that has the quality that you’re up against.

“But my disappointment is that we didn’t do enough with the football to really put them on the back foot and try and effect the result.

“It’s other bits when we were unopposed and it was our time to play, our time to go forward and to create and we just gave it away really cheaply. They’re not going to give it away cheaply.

“They’re going to keep it and move you about the pitch. But I thought the shape of the team was good and sometimes it’s just not enough to be an aggressive, enthusiastic, competitive side that has a go, you’ve got to show a little bit more than that to survive in this division. Today, we didn’t show enough of that to hurt a fabulous team.”