Manchester City boss Pep Guardiola has rejected Jurgen Klopp’s claim that Liverpool’s title race is now over after their loss to Leicester City.

Afterthe champions suffered a 3-1 defeat to the Foxes on Saturday, the Citizens eased past Spurs to move seven points clear at the top and 13 points ahead of the Reds, including a game in hand.

But despite the German conceded the title, Guardiola is adamant the Reds can still retain their title.

But Guardiola said: “From what I saw from the way they played against Leicester, we would have to lose games, but of course they can do it.

“It is the same Liverpool that I met in the last years. In the boxes they are not as clinical as before but the quality of their play is still there.”

Rodri opened the scoring from the penalty spot and the in-form Ilkay Gundogan added a second-half double.

City were again without key pair Kevin De Bruyne and Sergio Aguero – although the latter was an unused substitute – and Guardiola hailed the collective effort.

He said: “We don’t have players who can win the game by himself – we don’t have a Messi, a Cristiano, Mbappe or Neymar. We have to do it as a team.”

Gundogan is enjoying his best spell of form since he joined City in 2016.

“I am more than delighted with his performance,” said Guardiola. “He won the player of the month last month and if he keeps playing this way he is going to win it again.”

The downside was the German left the field a groin injury. Guardiola confirmed he will be assessed in the coming days.

Rodri took the penalty as City‘s search for a reliable taker in the absence of De Bruyne continued.

Guardiola admitted the Spaniard’s effort was not convincing and hinted that goalkeeper Ederson – who set up Gundogan’s second with a superb long ball – may be the next to get a chance. 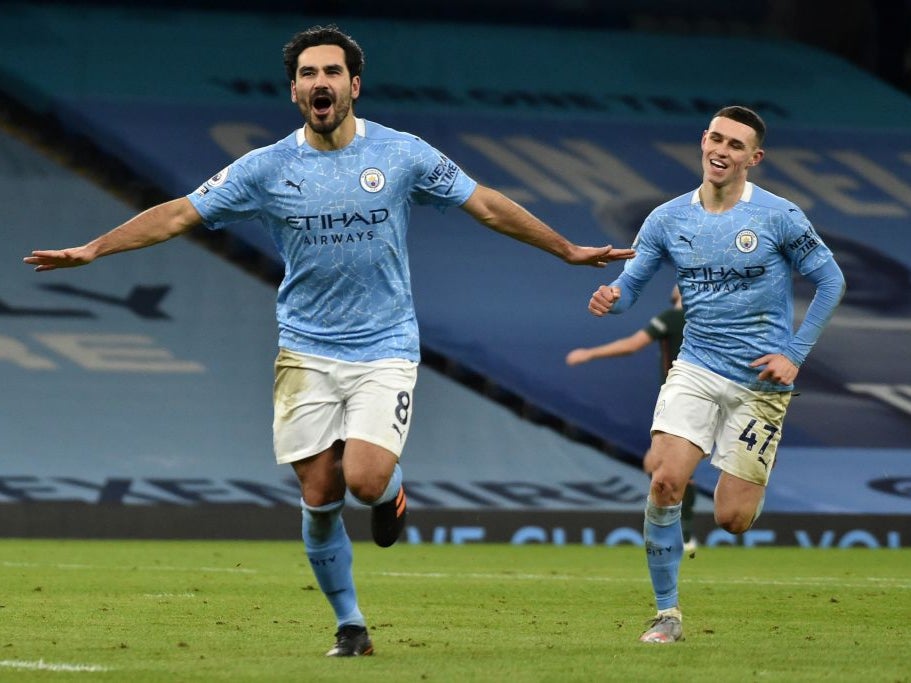 Guardiola said: “If he is able to make this assist from 60, 70 yards, I think, ‘OK, from 12 yards it is easier’. For the quality of the shot, Ederson is the best – but penalties are completely different.

“I am so delighted for Rodri, for having the courage to take it, but the taking was not good. I have to reflect. We don’t have a real specialist to take a penalty, that is the reality.”

Tottenham boss Jose Mourinho questioned the scheduling of the fixture.

He said: “This was a very special week where we played Wednesday and Saturday. I honestly don’t know why because, if I’m not wrong, Man City don’t play Tuesday or Wednesday in the Champions League. Our game in the Europa League is on Thursday.

“Why did we play on Saturday when could play Sunday? But there is no point going in that direction.”

Mourinho summoned both Dele Alli and Gareth Bale from the bench in the latter stages of the game.

Both have appeared to be out of favour but Mourinho insists they could still have a big role to play.

“We coaches can make wrong decisions but not one of us is crazy. Not one of us says, ‘I don’t want this player to help when he has the potential and the conditions to do it’.

“Do they have qualities? Yes, we know they have. If they are fit and ready, physically and mentally, welcome. The team needs everyone.”

Mourinho was unhappy with a challenge on Son Heung-min by Joao Cancelo late in the game.