Arsenal star Bukayo Saka was singled out for praise by Peter Crouch at half time of the Community Shield against Liverpool on Saturday. Saka started on the right of a front three for Arsenal, one of several different positions the 18-year-old has played since he burst onto the scene in 2019. He laid on the assist for Pierre-Emerick Aubameyang’s fine opener for the Gunners at Wembley.

A well-worked move, which started with goalkeeper Emiliano Martinez, found Saka on the right.

The teenager switched to captain Aubameyang with a cross-field pass, who then cut in and curled a superb shot past Liverpool No 1 Alisson.

But it was not just that moment from Saka which impressed Crouch.

“He’s been involved in everything, Saka,” Crouch said on BT Sport.

JUST IN: Tottenham backed to sign ‘fantastic’ Diego Costa on one condition 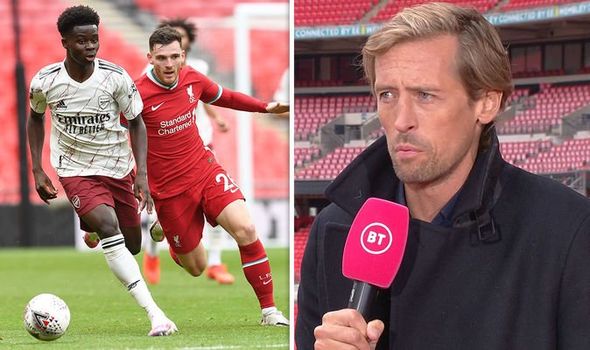 “I’ve been very, very impressed with him. He’s been picking the right passes, here he is again involved, creating the chance for Nketiah.

“They’ve got some talented players, Saka included obviously, I’ve been impressed by Arsenal.”

But he admits his old side did not look at their best in the first half.

“It was beautiful football,” Crouch said.

“It was obviously what Arteta wants from this Arsenal team, they’ve definitely got an identity about playing out from the back.

“The two runners, I think it’s [Ainsley] Maitland-Niles and [Kieran] Tierney, they create this goal.

“Obviously it’s all about Aubameyang and the finish but those two runs create it and they just give Neco Williams something to think about.

“And from then it was [Thierry] Henry-like, it was a finish he would have been proud of.

“If anyone looked sort of sloppy in the opening minutes, it was Liverpool.

“In the last sort of 15-20 minutes Liverpool have come in, they’ve dominated possession, and Andrew Robertson has looked dangerous down the left with the crosses and I think it’s a matter of time.

“But I think Arsenal have defended very, very well and nullified Salah and Mane to very little.”