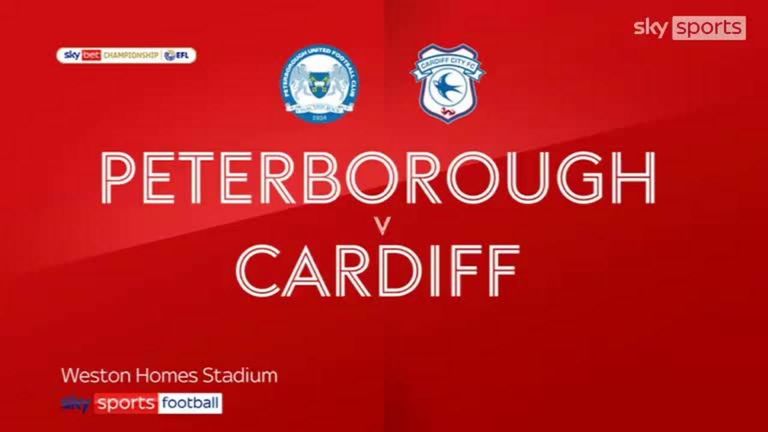 Two-goal hero Aden Flint spearheaded a stunning late fightback as Cardiff snatched a 2-2 draw in a thriller at Peterborough.

Darren Ferguson’s newly-promoted hosts looked on course for a second successive victory when striking twice in the space of three minutes early in the second half to take command at the Weston Homes Stadium.

But City had other ideas as they piled on the pressure to snatch a draw as Flint left Posh heartbroken with two clinical headers – both courtesy of exquisite Marlon Pack crosses – in a breathless finale.

The same two players who inspired Posh in their own sensational Saturday comeback for success against Derby did the damage again for them again.

Harrison Burrows and Siriki Dembele were rewarded for their stoppage-time strikes against the Rams with starts and repaid boss Darren Ferguson with more goals.

Teenage ace Burrows – making only the 11th league start of his career and first at this level – broke the deadlock with a rasping right-footed blast past keeper Dillon Phillips in the 49th minute after swapping passes with Jonson Clarke-Harris inside the box.

And Clarke-Harris was again prominently involved when Dembele doubled the lead following a clinical 51st-minute breakaway.

Dembele seized on the ball in his own half before bursting forward and finding Clarke-Harris who returned the compliment with a perfectly judged pass that Dembele controlled and poked past Phillips.

Boss Mick McCarthy responded to his side’s deficit by throwing on striker Kieffer Moore while Posh were weakened by the loss of skipper Mark Beevers from their defensive line due to injury.

City’s aerial bombardment of the Posh box became more threatening as the second half progressed and they were eventually rewarded with a reply in the 83rd minute when Flint produced a towering header into the top corner after being picked put by a fine Pack delivery from the right.

As the pressure eased in stoppage time, Posh man Burrows was denied a second goal by a fine Phillips save before substitute Joel Randall fluffed his finish to a counter-attack.

And those missed chances proved to be costly in the last of five additional minutes as Pack classily delivered from the left for an unmarked Flint to head home at the back post and spark wild celebrations among the away supporters.

Peterborough’s Darren Ferguson: “I feel for my players because it feels like a defeat. A night’s sleep won’t make any difference to that. It’s a bad result for us. But at the same time I’m proud of them for a really good performance that fully deserved a victory. It’s just shame we couldn’t kill Cardiff off as we had a couple of chances to do that at 2-1. I thought we’d seen it through but unfortunately it cost us not taking them.

“When you come up against a team like that, who keep putting bigger players on, it becomes hard to stop and they managed to nick the draw. Losing Mark (Beevers) to a hamstring injury is a huge blow and having to take Jonno (Clarke-Harris) off was a big factor because he caused them all sorts of problems. But I’m juggling players who are nowhere near full fitness and I’ve got others out on top.”

Cardiff’s Mick McCarthy: “It certainly wasn’t the intention to leave it late like that – although it wasn’t the intention to start dreadfully in the second half and find ourselves 2-0 down either. I’m disgusted at the manner in which we conceded the two goals and we looked absolutely awful at that point. It was panic stations, but we got ourselves something from nothing really so I have to be delighted.

“Flinty was excellent and we know what he is capable of. We had cross afte cross after cross in the last 10 minutes and you’re always going to fancy Aden Sean (Morrison) or Kieffer (Moore) if they can get up early. I thought we showed we had plenty of character when we won 10 games, drew nine and only lost three after I came in last season. We’ve clearly not lost that despite the first 10 minutes of the second half knocking the stuffing out of us.”