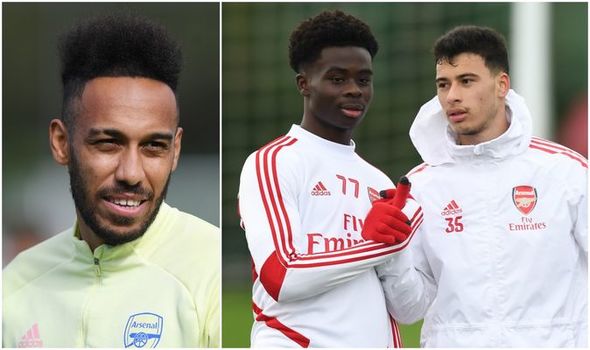 Arsenal striker Pierre-Emerick Aubameyang has hailed Bukayo Saka and Gabriel Martinelli for making a “big, big impact” for the Gunners this season – with the duo having last week signed new contracts at the Emirates.

The two teenagers are the stand-out candidates to win the north London outfit’s Young Player of the Year award after excellent individual seasons.

Martinelli’s value has scored since a £6million switch from Ituano last summer, having mustered 10 goals and four assists in 26 first-team appearances.

That’s despite the 19-year-old having switched between roles, mainly as a left-sided winger and a centre forward but also occasionally as a right-sided attacker.

Such form saw him handed a new long-term contract last week, one which significantly increases his salary with the Gunners. 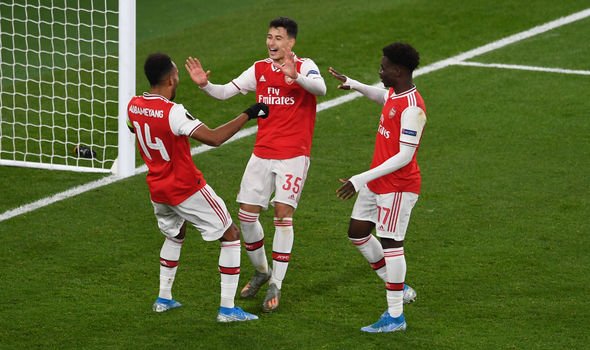 While Saka, 18, committed his future to the Premier League giants with his previous deal having been set to expire in 2021.

The London-born attacker has thrived in multiple different roles this season, including as a stand-in left-back, as well as in a more natural left-wing role.

Playing in the front three, Saka – who has also played in midfield under Mikel Arteta – scored his first Premier League goal in a 2-0 win at Wolves at the weekend.

And while Martinelli is out for the rest of the season through injury, academy graduate Saka will continue to play a key role if Arsenal are to enjoy a strong end to the season in the league and the FA Cup.

Writing in his programme notes ahead of tonight’s clash with Leicester (8.15pm), Aubameyang noted the contributions of both Saka and Martinelli this term.

“It was great for the club that Bukayo and Gabi signed new contracts last week,” he said. “They have made a big, big impact at the club even though they are only teenagers.

“Particularly for Bukayo, it must be amazing to sign that contract and think back to when he first put on an Arsenal shirt in the Academy when I think he was only six or seven.

“Both of them are such impressive players already, they have so much to their games – as Bukayo showed with that brilliant goal on Saturday when he just guided it in so nicely.

“It’s funny for me looking back because at 18 I was really raw. Three was a lot more for me to learn and it took me a few years to really see all of my potential.

“But these boys – and you can say the same about Joe [Willock] and Eddie [Nketiah] too – they already seem to have lots of mature attributes.

“And the great thing is that they are making an impression at the highest level now, but they key is that they are hungry to work hard and really want to learn more and get better and better.

“There’s actually a kind of link with these lads to Leicester because when I was 21, I went on loan to Monaco from Milan. 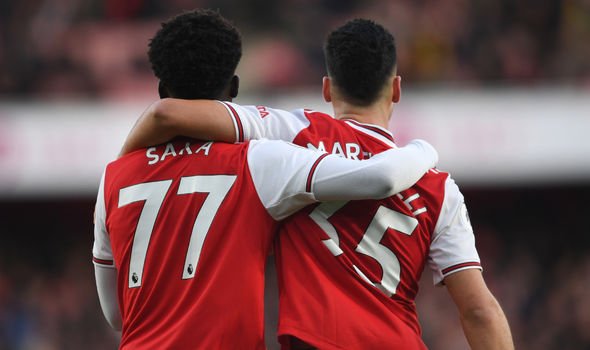 “I made my debut in the first game of the season at Lyon – a big game – and also making his debut was a guy who was only 18, like Bukayo, but had been playing for all of France’s junior sides.

“His name is Nampalys Mendy and he may well play against us tonight for Leicester. It will be good to see him again, our careers go way back!”

Arsenal go into the clash with the third-placed Foxes sitting nine points off of fourth-placed Chelsea with five games to go of the campaign.

Leicester need a win at the Emirates with fifth-placed Manchester United now just three points behind them.