PLAYER RATINGS: Trevoh Chalobah impressed with his firing form shooting Chelsea to the top of the table while Timo Werner made no mistake with his goal… but Theo Walcott squandered his chances

Thomas Tuchel’s Chelsea have returned to their winning ways and top the Premier League table after a victory over winless Southampton at Stamford Bridge.

The Blues were looking to bounce back from their 1-0 defeats to Manchester City last weekend and Juventus earlier this week.

Youngster Trevoh Chalobah opened the scoring for the hosts, with Timo Werner and Ben Chilwell also scoring for Chelsea.

James Ward-Prowse converted a penalty but was later sent off via VAR for a dangerous challenge on Jorginho.

Here, Sportsmail rates the performance for each of the players… 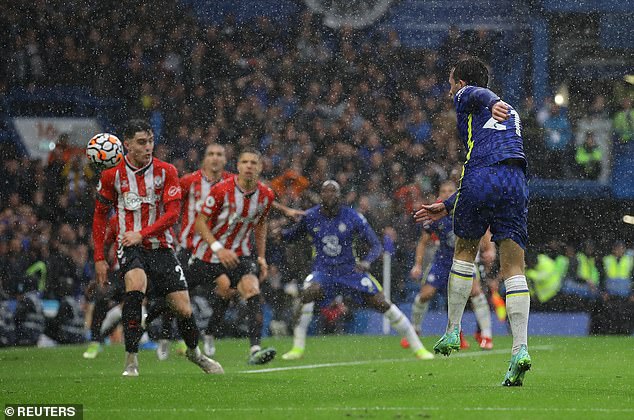 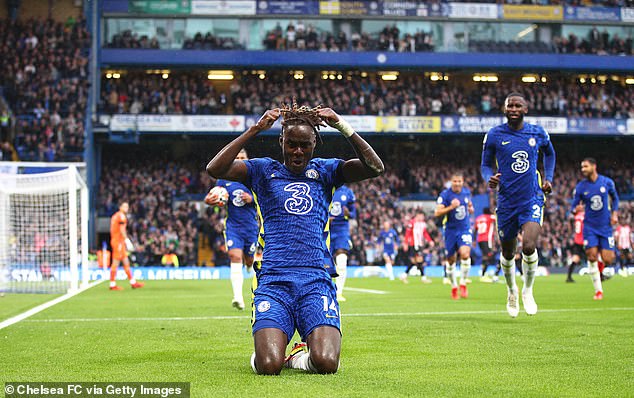 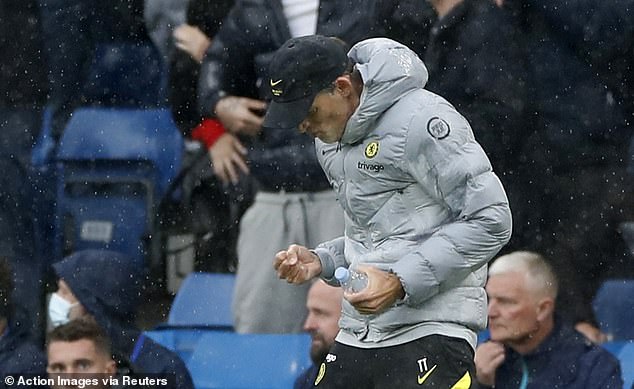 Only one save of note in a mostly trouble-free first-half, when he dived full-length to hold a deflected shot from Adam Armstrong. No chance with Ward-Prowse’s penalty.

Full of energy at right-wing back, delivered early low crosses to set up chances for Werner and Lukaku, but fouled Walker-Peters in the build-up to Werner’s header, which was ruled out by VAR. Decisive cross to set up Werner’s late goal.

Usual composed self, including one impudent chip over Theo Walcott’s head. Rarely ruffled at the back, but booked early in the second half for upending Redmond in midfield. 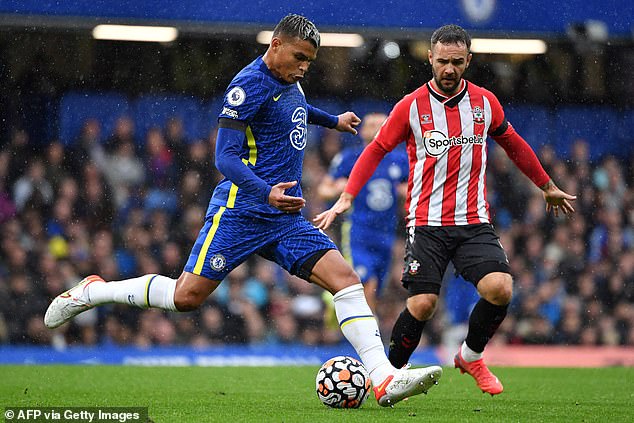 Usual Rudiger performance – powerful at the back, and one barnstorming run forward, supplying Lukaku to shoot home in the 36th minute only to be given offside.

First start of the season. Got forward well from left-wing back, and denied a goal in the 26th minute by McCarthy’s outstretched leg, and had another shot saved soon afterwards. Conceded penalty from which Southampton equalised, but scored in the closing stages with a superb volley.

Also in for first start of the season in central midfield. One powerful volley just wide in the 22nd minute. Always keen to drive forward, but did not always find the right final pass. Replaced by Ross Barkley late on.

Another fine display by the academy graduate. Recalled for his first start since playing in the win over Aston Villa three weeks ago and opened the scoring with a diving header. Composed in defence, too. 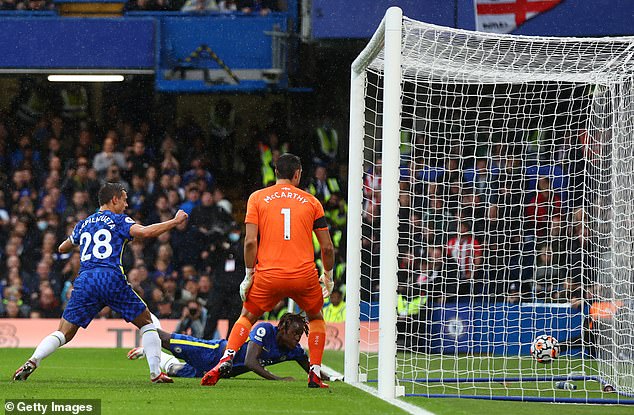 Busier but not much better than in recent games. Broke up play well but his passing was mostly off target. Replaced by Jorginho in the 73rd minute.

Promoted to the starting line-up and played on the left. Denied a goal scoring chance by a superb tackle from Livramento before half-time. Replaced by Mount in the 65th minute.

Denied an early goal by Jan Bednarek’s brilliant block, and then strayed offside when Rudiger set him up for his 36th minute ‘goal’ that was correctly ruled out. Inadvertently blocked a goalbound effort from Chilwell. Another goalless game for the £97.5m man. 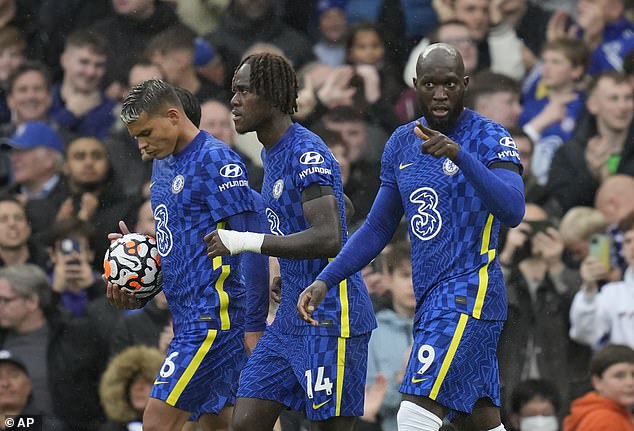 Recalled after being dropped against Juventus, and scored a decisive goal. Had two shots saved superbly by Alex McCarthy. Header disallowed in the first-half but made no mistake turning in Azpilicueta’s late cross to put Chelsea back in the lead.

Set up by Werner but shot straight at McCarthy.

Most significant impact was being fouled for Ward-Prowse’s red card.

Instant impact to set up Werner’s winner with superb crossfield pass to Azpilicueta.

Made decisive changes after the midweek defeat at Juventus and was rewarded with a first win in three games. Booked for protesting when Werner’s header was disallowed in the first half. 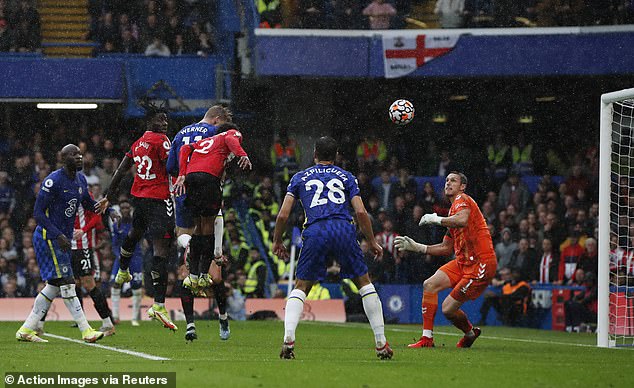 Made three good saves in the first half-hour, from Werner and Chilwell, but no chance with Chalobah’s opening goal. Brilliant one-handed save from Werner in the 72nd minute and although he stopped Chillwell’s late shot, the ball was over the line.

Former Chelsea defender looked good on the ball at right back and had a great running battle with his former team-mate Hudson-Odoi. Fouled by Chilwell for the penalty from which Ward-Prowse equalised. 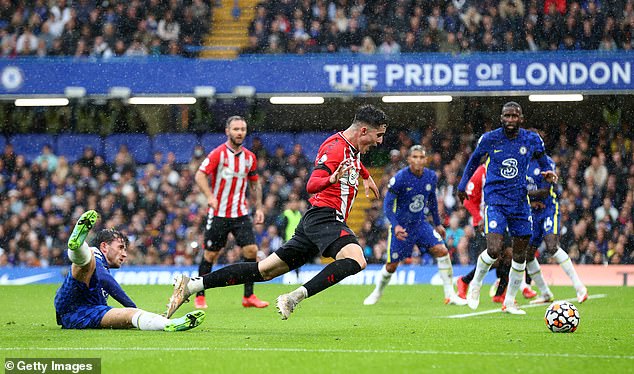 One vital block early on to deny Lukaku a goalscoring chance, another early in the second half to keep out a dangerous low cross from Werner. Hard task against Lukaku but kept the big Belgian largely quiet.

Commanding display in central defence. Used his speed to good effect against Werner and Lukaku, and made some important blocks and tackles. Booked for fouling Werner late on.

Difficult time against the pace of Timo Werner, but it was Azpilicueta’s foul on him in the build-up to Werner’s headed goal that led to VAR ruling out the effort. Poor going forward

A couple of early bursts forward using his blistering pace, but both came to nothing. Injured in the 66th minute but played on after treatment. Replaced by Moussa Djenepo on 73 mins.

Flashed a header wide from Nathan Tella’s cross in the 33rd minute, and hit a half-volley horribly high and wide. Replaced at half-time by Ibrahima Diallo.

Mixed fortunes for the Saints skipper. Flashed one fizzing half-volley just wide in the 21st minute and scored from the penalty spot on the hour, but sent off in the 77th minute for a studs-up challenge on Jorginho. 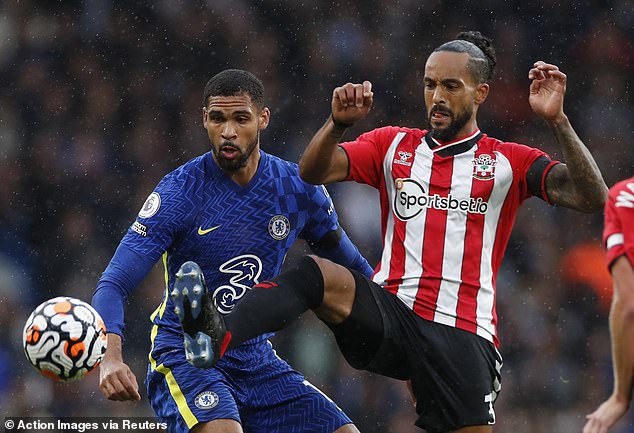 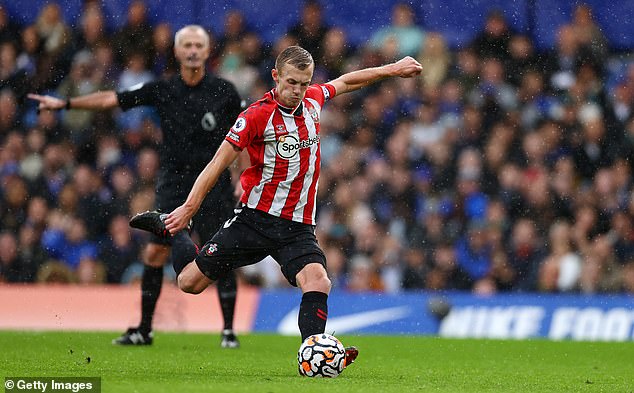 Another former Chelsea man, busy in midfield. One superb block to keep out a goalbound effort from Werner before half-time. Booked for a foul on Kovacic in the first half.

Not many clear openings, but had one long-range shot deflected and then saved by Mendy in the first half. Another shot on the hour mark looped off Silva’s leg and over the bar.

Did some good defensive work as well as his usual forward play, notably robbing Hudson-Odoi as the Chelsea man prepared to counter-attack. Switched from left to right wing after Walcott went off.

He had hardly time to show his attacking prowess once Ward-Prowse was sent off.

As exasperated as Tuchel on the sidelines as his team threw away the chance of hard-earned point at Stamford Bridge. Saints were in with a chance until they went down to 10 men.