Report and free highlights as England U21s hopes of qualifying for the Euro 2021 quarter-finals now rest on beating Croatia, live on Sky Sports Football on Wednesday from 4.30pm, and hoping Portugal can pick up another win against Switzerland

England’s European U21 Championship hopes are out of their own hands after goals from Dany Mota and Trincao gave a vastly superior Portugal a 2-0 win on Sunday.

Portugal should have been ahead before half-time, with Ben Godfrey twice denying Mota with goal-saving blocks, and a pair of Aaron Ramsdale saves keeping them at bay.

The Young Lions would hold on for only 19 minutes of the second period, and were finally caught out on the break when Pedro Goncalves robbed Oliver Skipp before feeding Mota, whose first-time effort kissed the far post on its way past Ramsdale.

England provided little in the final third, with debutant Noni Madueke firing over in one of few half-chances for Aidy Boothroyd’s side, who have managed only one shot on target across their two games at this year’s tournament to date.

They were handed a further blow 15 minutes from time when Marc Guehi was penalised for catching Goncalo Ramos’ foot inside the area, and Barcelona forward Trincao’s emphatic penalty sent Ramsdale the wrong way from the spot.

England now must beat Croatia in their final group game on Wednesday, and hope Portugal do the same against Switzerland, or Aidy Boothroyd’s team will be heading home after the group stages for the fifth time in six tournaments. 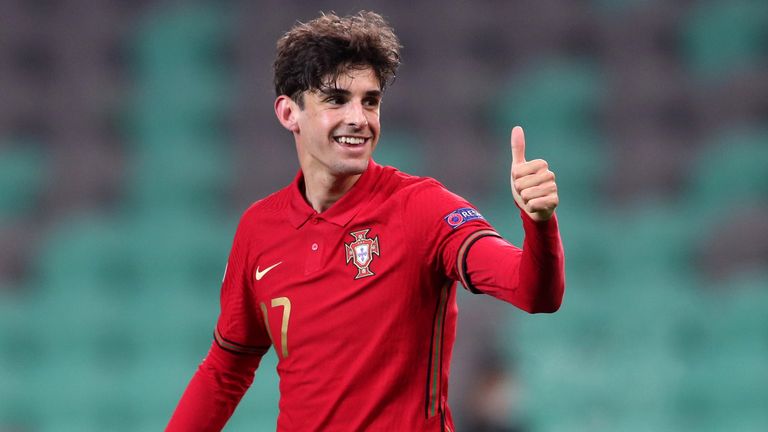 Young Lions fail to roar as Portugal ease to victory

England looked like a side playing with the pressure of knowing their destiny would be out of their control from the outset. The match was barely four minutes old when Thierry Correia was given space to find an unmarked Mota at the back post, and only Godfrey’s intervention on the line spared his team-mates a nightmare start in Ljubljana.

It took 23 minutes for the Young Lions to provide any hint of a threat, when Emile Smith Rowe, later substituted at half-time, found a way past Diogo Dalot before squaring for Ryan Sessegnon, who was denied a tap-in by a last-ditch Correia intervention.

England U21s made four changes from the defeat to Switzerland, bringing in Noni Madueke for his debut in place of the injured Callum Hudson-Odoi.

Godfrey again spared England’s blushes before half-time as Correira’s long-range shot was spilt by Ramsdale at Mota’s feet, and the Everton defender’s lightning reactions again saved England as he cleared behind for a corner.

Fabio Vieira, handed a start after his goalscoring exploits from the bench against Croatia, fired a warning shot 13 minutes into the second period having drifted behind the England midfield, who would be caught out soon after for the opening goal. 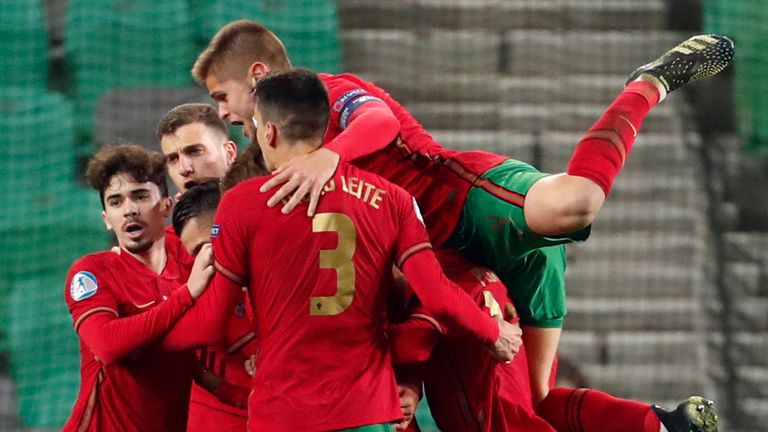 With Skipp tackled upfield the Young lions’ defence were left exposed, and as Goncalves headed forward without a hint of an England tackle, he was free to find Mota’s run on the left, leaving the Monza forward to tuck the ball in off the far post.

England brought on Conor Gallagher and Curtis Jones as they were forced to chase the game, but within minutes faced a steeper uphill climb after Guehi was penalised for an inadvertent stamp on Ramos’ heel just inside his own area, leaving Barcelona’s Trincao to beat Ramsdale from 12 yards.

How can England qualify?

England can still qualify for the knock-out stages, but only if results go their way on Wednesday.

They can only earn enough points to finish second by beating Croatia by two clear goals, with Portugal also beating Switzerland in their final group game.

That would give England the edge in the head-to-head rankings over Croatia and Switzerland, who would both also have three points, sending England through with Portugal.

Boothroyd threw on Rhian Brewster as England piled numbers forward in the vain hope of a comeback but still could not muster a single shot on target even in the closing minutes, and instead, Ramos came closest to adding another late goal when turning inside Japhet Tanganga and firing just past the far post.

By the final whistle, the Young Lions were resigned to their defeat and staring down the barrel of a fifth group-stage exit from six European Championships since their run to the final in 2009, which seems even further away after another dismal performance on the big stage. Boothroyd took charge of England’s U21s for the final two games of qualifying and maintained an unbeaten passage to the finals, where the Young Lions lost on penalties at the semi-final stage to Germany. England had drawn with Sweden in their opening group game but recovered to beat Slovakia and hosts Poland, before drawing 2-2 with Germany in normal time at the final four stage.

Boothroyd said at the time: “We might not have been at our best for long periods but we showed a real British bulldog spirit. We could have nicked it but that’s football. We’ve practised, practised and practised penalties but the ‘keeper has made two good saves. It was a real effort – a real backs against the wall job at times. It’s been a long journey. The tournament has been fantastic. I’m sure there will be future senior players in this team.” 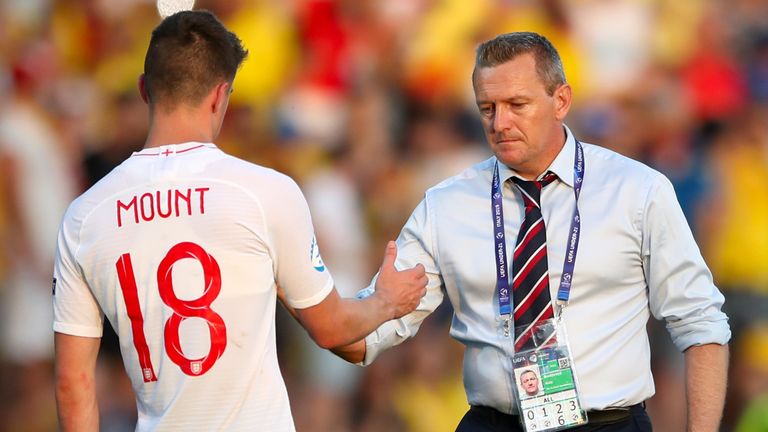 England once again qualified for the finals without suffering defeat – but dramatic late goals from France and Romania saw England eliminated from the group stage with a game to spare. France struck in the 89th and 94th minute to snatch a 2-1 win in the opener before eventual finalists Romania grabbed a 4-2 victory with strikes in the 89th and 93rd minute, with their third coming via a Dean Henderson error. To add salt to the wounds, Croatia scored an equaliser inside the final 10 minutes to draw the dead rubber third group game 3-3.

Boothroyd said at the time: “I genuinely believed we could do it but Dean Henderson’s mistake, we all make mistakes and it’s important we make sure he knows how important he is to us. If you don’t take your chances and are not disciplined enough to stay on your feet, you are going to get punished. In order to get through this we have to take the positives out of it. We are on the right track in terms of how we play the game but we need to iron out the mistakes.”

England’s remaining fixture will also be blogged live on skysports.com and the Sky Sports App: