Report as Barcelona pepper PSG goal with 16 shots in first half but couldn’t force a miraculous comeback after losing the first leg 4-1; Lionel Messi scored with a thumping 30-yard drive but missed a penalty at a key time 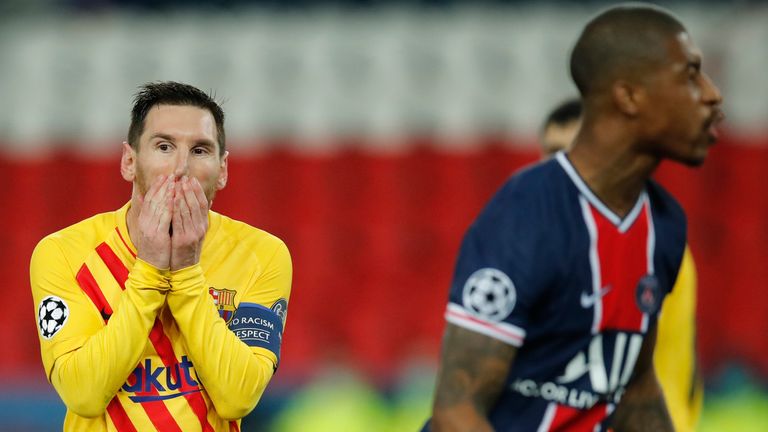 PSG survived a first-half onslaught from Barcelona, where Lionel Messi scored but missed a penalty, to draw 1-1 and progress 5-2 on aggregate in the Champions League.

Ronald Koeman’s side needed to score four goals for the tie to swing in their favour in Paris and started like a team capable of producing them with Ousmane Dembele wasting some glorious early chances.

It was to be PSG who opened the scoring when referee Antony Taylor awarded a penalty via the use of the pitchside monitor to deem that Mauro Icardi had been fouled off the ball by Clement Lenglet. The penalty was dispatched by Kylian Mbappe as he became the youngest player in Champions League history to reach 25 goals in the competition, taking the mantle from Messi.

Despite falling behind, Barcelona remained positive and Messi thrashed home a fabulous strike to inspire some hope but that hope faded away when his penalty was saved by Keylor Navas just before half-time.

The Spanish giants needed three second-half goals to force extra-time but PSG were much better organised after the break and restricted Messi’s influence on the game.

Man of the match: Keylor Navas

This will be the first Champions League season without a Messi or Cristiano Ronaldo side in the quarter-finals since 2004/05.

PSG will find out their opponents in the last eight on Friday, March 19 when the draw is made.

How PSG got the job done…

Barcelona flew out of the traps. They could and should have been ahead if not for some very wasteful play from Dembele in terms of his sloppy final ball passing and poor finishing.

At the same stage of the competition four years ago, Barcelona lost 4-0 in Paris only to win 6-1 at Camp Nou in one of the greatest comebacks in Champions League history – a similar comeback looked plausible judging by the tempo Barcelona were playing at.

However, PSG moved four goals clear when Mbappe, who scored a hat trick at Camp Nou, netted from the spot. It was a controversial decision to award the penalty as Icardi was accidentally tripped by Lenglet when having no chance of reaching Mbappe’s cross. The incident was spotted by VAR and they instructed Taylor to head to the screen and he surprisingly overturned his original call of no penalty.

That goal was firmly against the run of play and, after Barca had squandered more chances, Messi equalised with a powerful shot from 25 yards that tore into the top left corner.

But Messi then had a penalty saved by goalkeeper Navas on the stroke of half-time, his first miss from the spot in the Champions League since 2015.

Barca kept probing in the second half, and Messi had a chance from close range but hesitated a split-second before shooting and allowed defender Marquinhos to block his shot with the goal gaping. 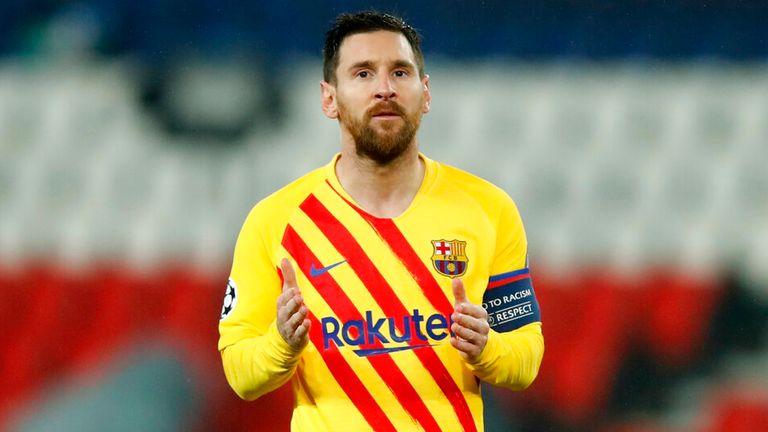 That was good as it got for Barcelona in the second half as PSG were far better organised in defence.

The visitors’ hopes gradually fizzled out as PSG booked their spot in the last eight.

Man of the match: Keylor Navas

Once again, this match showed why every top team needs a world-class goalkeeper within their ranks. Navas was on hand to make nine saves – eight of those coming in a first half where PSG were seriously outplayed by a team that looked like the Barcelona of old. Such was the form of the goalkeeper, he even managed to keep arguably the greatest footballer of all-time from scoring from 12 yards. Not many manage that.

Aston Villa 1-2 Leicester: Brendan Rodgers’ side up to second in Premier League