Home » Soccer » Qatar is the playground of the sporting rich

IAN HERBERT: Qatar is the playground of the STINKING rich… while migrant workers toil under the sun, cruise-liner glitterati are showered with gifts and goodies

The labels on the cardboard boxes they were wheeling up to one of the cruise liners moored here to accommodate fans revealed this was a place where corporate gifts are dished out. ‘FIFA Goodies. 45 bags,’ one of them stated. The other box had 43 bags of the same.

They were destined for the MSC Poesia, the 1,400-cabin ship which docked three days ago, though the vessel moored alongside, MSC Europa, seems to be where the cruising elite will be floating during this World Cup.

‘This is where the WAGS will go,’ said one employee outside. Was the talk of it costing £300 a night accurate? ‘And the rest!’ she said. 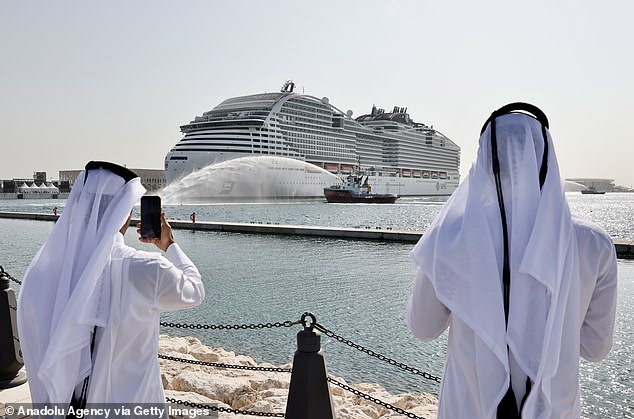 There will be no segregation of fans on the ship, which has its own microbrewery, so it is to be hoped that residents will be too busy enjoying the 11-storey stainless steel spiral slide to take rivalries too far in drink. It could be lively. The ship can accommodate 7,000.

The red World Cup shuttle buses which are already a ubiquitous part of the tournament landscape were empty as they rattled up to the Europa and Poesia on Thursday. But there was feverish work going on to lay turf which the residents will look out on when they start arriving.

Immigrant workers found temporary shade from the burning heat beneath a mobile solar panel. There were dozens working under an aggressive sun here. So much is unfinished and temporary, a work in progress right up to kick-off of a tournament which is all about the money.

The owner of a shop selling hijabs in the colours of all the World Cup nations, in the brand new mock souq they have built for cruise liner custom, says he is only here for a month. He is not sure of the profit margin on these cheap- looking items, which he will sell for £23. 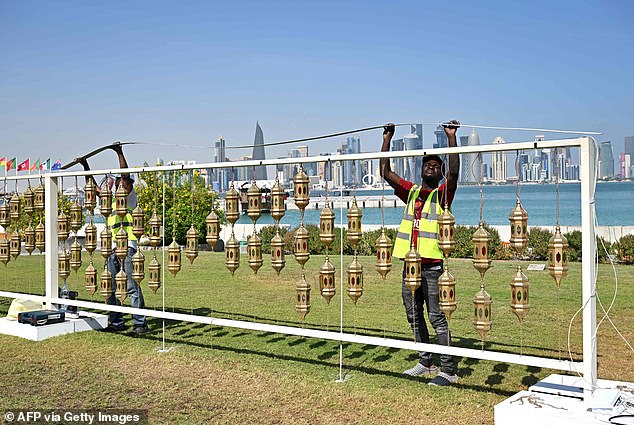 Labourers work in Doha on Thursday, days before the start of the tournament on Sunday

‘The Qatari men own this place. We are only salesmen,’ he says.

Argentina fans have commissioned their own cruise liner, though it seems unlikely to dock here. That most animated of fan bases might not be appreciated by the individuals known as ‘VVIPs’ – yes, ‘Very, Very Important People’.

They are even listed as a category on red World Cup stadium signposts on the highways and private yachts moored up reveal that the cost of docking will be very steep. Moored a few hundred yards across the water from the Europa is the Alayia, bought last December by billionaire steel magnate Lakshmi Mittal from Russian former Everton co-owner Alisher Usmanov.

Cardboard boxes were also being carried to this ship, though one of its staff refused to say whether this would be a place for World Cup entertainment. ‘It’s confidential. We can’t talk about it, sorry,’ she said, hurrying off.

There is less luxury for the hoi polloi. The mock souk is modest, with establishments such as Chrome London still being hurriedly equipped.

The consolation for the Argentines, wherever they might dock, is that the locals seem to view them and Brazil as their favourites after Qatar. There are people in Lionel Messi ‘10’ shirts even before the fans pile in.

No expense has been spared on the media, who are important to the Qataris. The central media centre — something this event has never known before — is extraordinary, surpassing anything the Olympics has ever known.

There are surround-sound cinemas to watch games, copious quantities of table football and, for no obvious reason, a 30ft bronze sculpture of a spider.

Doha does not seem quite so at home with the great unwashed. The signs on the sculptures of a camel and a cow in the souk — ‘Do not touch or climb’ — called to mind similar structures put in place in Amsterdam at last summer’s Euros.

The Dutch positively encouraged climbing. Doha’s do not seem football-proofed. The leg of the cow had broken off on Thursday morning and had been glued back on by last night and painted over to maintain a veneer of perfection.

Huge numbers of people have been thrown at preventing overcrowding among the 1.3million who will descend. The Metro system’s gold carriages, for the VVIPs, and family carriages have been thrown open to all, when a year ago they were set to be strictly policed.

Some Metro entrances have been designated exit-only, with labyrinth-like walkways to approach alternative doors in.

Time will tell how fitting in the masses will work. A test event at the FIFA Fan Festival on Wednesday night stretched back hundreds of yards, and even at sunset it was too hot to linger on the unshaded lawns of the Al Bidda Park on the approach.

There is no shade on the lawns beside the Europa, either, though the VVIPS will not have to wait in the heat to get on board.

A fast-track check-in lane has been created for those who can afford it. That’s Qatar and that’s this World Cup — a dream if you have cash to burn, a nightmare if you built it.

Antonio Conte's Tottenham honeymoon is OVER after cup exit to Chelsea