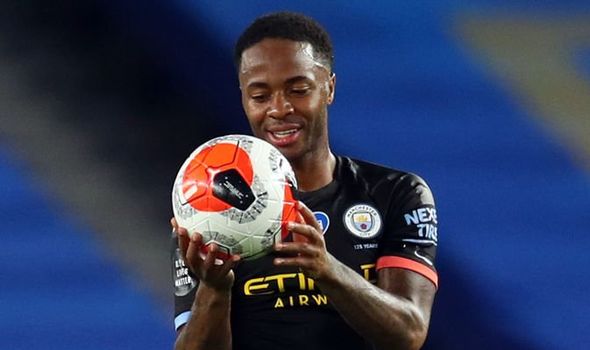 Raheem Sterling has hinted he will sign a new deal at Manchester City following the club’s success at overturning their Champions League ban. Sterling’s future was unclear at City with the two-year ban for breaching FFP.

But following CAS’ decision to overturn the ban yesterday Sterling has hinted he will stay with the club long-term and sign a new deal.

In response to a tweet from City which read: “#OnThisDay in 2015, we also completed the signing of @sterling7

“Since then it’s been raining goals at the Etihad.”

City are set to step up their efforts in signing up Sterling, Kevin de Bruyne and Pep Guardiola to new deals.

They are also looking to spend big this summer with the likes of Kalidou Koulibaly, Milan Skriniar and Nathan Ake on their radar.

City want two centre-backs, a left back and a winger to replace Leroy Sane who has joined Bayern Munich.

But getting Sterling to commit to a new deal would be a huge boost to the club who are desperate to overhaul Liverpool in the Premier League next season.

City slipped up against Chelsea to hand Liverpool the title last month but have been in great form since the restart with six wins in eight games, including beating Liverpool 4-0, Arsenal 3-0 and Burnley, Brighton and Newcastle all 5-0.

And they on course for a treble having won the League Cup and with the FA Cup and Champions League still to play for.

They face Real Madrid in the round of 16 with a 2-1 lead from the away leg.

After Saturday’s win over Brighton Guardiola revealed how he was proud of how Sterling was helping influence change in the world.

“The big athletes contribute to society and Raheem is doing a lot to make things better around the world,” said Guardiola.

“People forget behind the shirt there’s a human being. I say to the players all the time, all you can do is play football. You are not an architect, not a politician, or a doctor.

“There’s one million things they can’t do which does not make us special but there are things we can do.

“They have feelings and defend the humanitarian issues as much as possible and I like it because if you can do your best for society and for the kids (its good).”