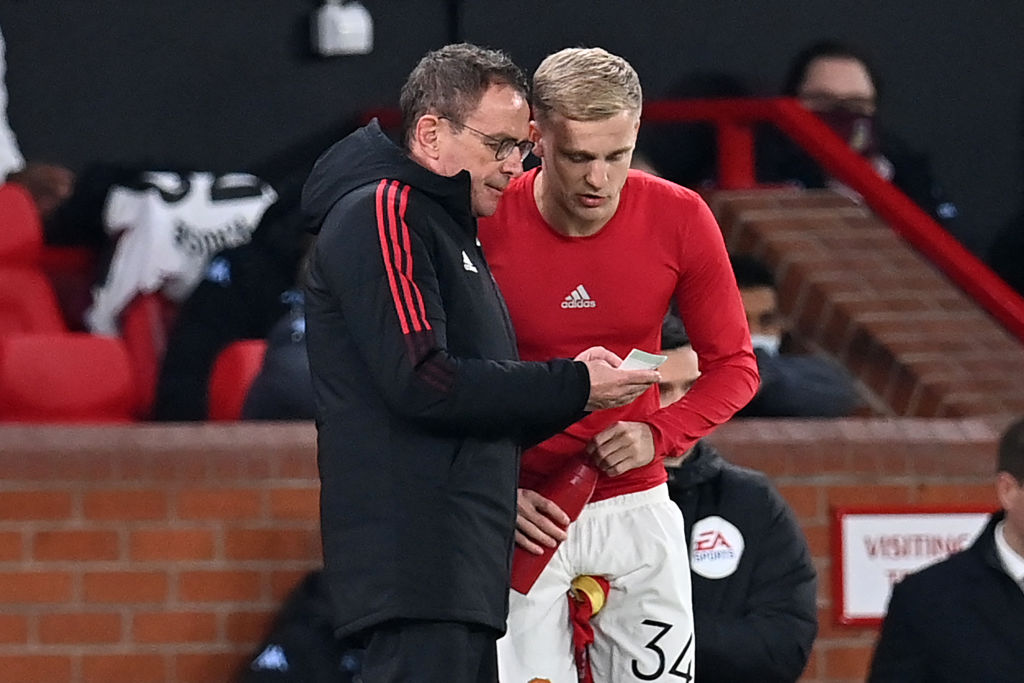 United progressed to the fourth round of the FA Cup after a fortunate win against Steven Gerrard’s side at Old Trafford, thanks to an early goal from Scott McTominay.

Villa were the better team for large periods at the Theatre of Dreams and Danny Ings had an equaliser controversially ruled out in the second half.

With the visitors on top, Rangnick took Edinson Cavani off and replaced him with Van De Beek with twenty minutes to go.

By switching to a diamond formation in midfield, United regained control of the match and Rangnick said this was down to Van de Beek’s introduction.

‘The game against Villa today confirmed, with a minimum three central midfielders, we had problems in times of the game to control the centre of the pitch,’ Rangnick explained.

‘From the very moment when we changed to a diamond in the last 20 minutes, when Donny came on, from then on we controlled the game, we had our counter-attack situations.

‘Unfortunately, we didn’t take the right decisions in the final third, so if we had done that we could and should have scored the second goal. But it’s not so easy to control the centre of the pitch and at the same time have our wing players involved and play with at least one central striker

‘For us, on the bench, that was a difficult job to find out how we could do that. In the end, we decided to take off Edi and had a diamond in midfield and have two fast wingers as the only strikers on the pitch.

‘You saw the way we prepared the goal was brilliant; we kept control around the box, we changed sides, a brilliant cross and fantastic header by Scotty

‘As a coach, I am always somebody who likes to have control and wants more control. It’s a question of balance and we still need to improve in those moments.’

Van de Beek has endured a torrid time at the club since making a £34million transfer from Ajax in 2020.

The Netherlands international is keen on leaving the club after failing to see his playing time increase since Rangnick’s appointment but the German wants to keep the midfielder.