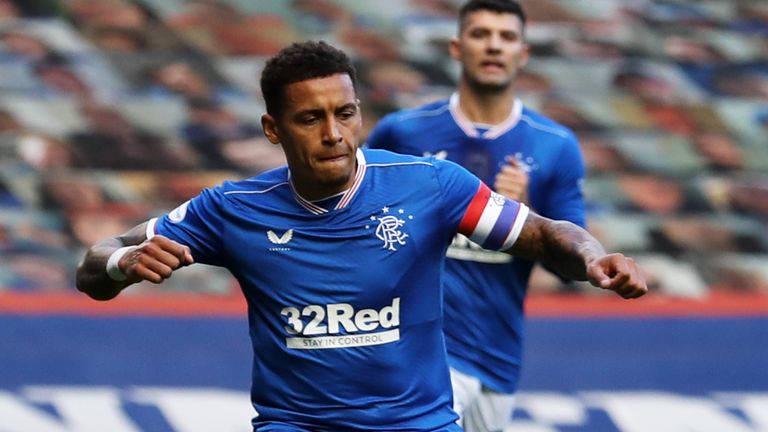 James Tavernier continued his scoring hot streak as he helped fire Rangers back to the top of the table after a 2-0 win over Ross County.

The skipper has now netted eight goals in as many games after converting yet another penalty.

Birthday boy Brandon Barker made the points safe with two minutes left as he celebrated turning 24 by firing in his second Rangers goal.

After sparking in recent wins over Willem II, Motherwell and Galatasaray, this was a more subdued display from Steven Gerrard’s team.

But it was enough to nudge the Light Blues back to the Premiership summit after Celtic had briefly taken over at the top with their win over St Mirren.

How Rangers returned to the top

Staggies boss Stewart Kettlewell spent the afternoon in the Ibrox stands due to a touchline ban and he saw his side create an early opening when Regan Charles-Cook flashed a ball across goal but it was out of reach for Michael Gardyne.

And that was about all County saw of the Rangers box in the first period as they were driven back to the opposite end of the pitch by the dominant hosts.

Coll Donaldson’s trip on Ryan Kent handed Borna Barisic a free-kick opportunity but his strike clipped the wall as it soared over. But there was a more costly foul from the County centre-back on 17 minutes as he barged Alfredo Morelos in the back as the Colombian chased Tavernier’s dinked ball over the top.

That presented Tavernier with his fourth spot-kick in as many games and he continued his run of goals, firing straight down the middle as Ross Laidlaw dived left. Morelos muscled his way into some space on the edge of the box but the low strike was straight at Laidlaw while Connor Goldson powered a header just over the bar from a Barisic corner.

The last action of the opening half saw a Kent shot take a nick off a defender before creeping wide.

There was another vital block from Donaldson seven minutes after the break as he appeared from nowhere to stop Morelos scoring what looked like a certain second. Laidlaw was on his toes too, tipping over a Balogun strike from Kent’s corner but Morelos really should have netted as he fired over from the corner of the six yard box.

Rangers had not really shifted out of second gear at any point but a moment of complacency very nearly cost them as Ross Draper stripped Kent of the ball but then overcooked a pass into Ross Stewart’s feet when the striker only had McLaughlin to beat.

There was almost a calamitous own-goal as Morris saw his headed back-pass flew just wide of his own net after a mix-up with Laidlaw.

County were waiting for their one big chance to cause a shock and it came with 10 minutes left, only for Donaldson to waste a free-header six yards out from a Reid free-kick.

And hope was extinguished on 88 minutes as substitute Barker raced onto Ianis Hagi’s ball over the top before driving past Laidlaw.

For Rangers, it’s the small matter of the Old Firm Derby after the international break. That will take place at 12.30pm on Saturday October 17th and will be shown live on Sky Sports Football. Ross County return to action later the same day when they host Hibernian.