Steven Gerrard’s side cruise through third round tie; Jermain Defoe, Nathan Patterson add to Roofe double; Rangers face Celtic in fourth round on weekend of April 17 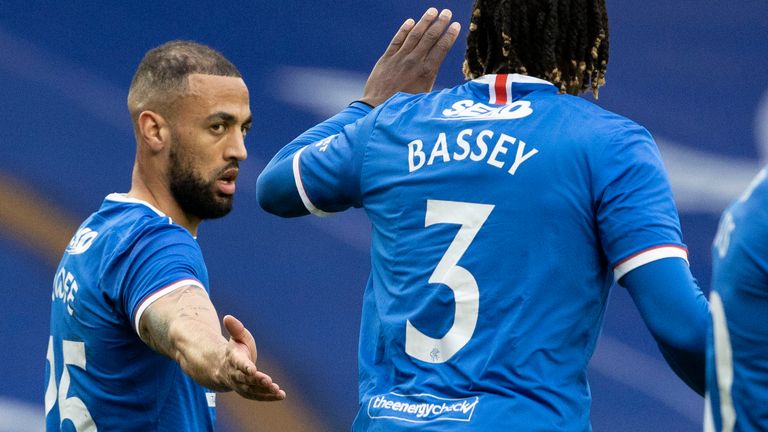 Rangers will have to overcome Celtic to keep their double dreams on course after sweeping past Cove Rangers to set up a Scottish Cup Old Firm clash.

Steven Gerrard’s team learned before facing Paul Hartley’s League One part-timers the prize for the winners was the chance to host Celtic in the last 16.

And that was all the inspiration the recently-crowned Premiership champions needed as a Kemar Roofe brace plus strikes from Jermain Defoe and Nathan Patterson all before half-time saw them cruise to a 4-0 triumph.

The Hoops will now make the first of two visits to Ibrox in the space of a fortnight over the weekend of April 17-18, with the winner going on to stage a quarter-final clash against St Johnstone or Clyde.

Complacency robbed the Light Blues of the chance to make this year’s Betfred Cup the first trophy of the Gerrard reign as they were stunned by St Mirren back in December.

But there was little chance of a repeat of their only domestic slip-up even as Gerrard made seven changes to the team which drew 1-1 with Celtic a fortnight ago.

Patterson and Calvin Bassey started in the full-back slots after Gers appealed their four-game bans for breaching lockdown rules while Scott Wright came in for his first start since joining in January. But there was little sign of that experience on show as the Aberdeen outfit continually shot themselves in the foot by insisting on playing out from the back.

They did well to survive three big chances inside the opening 11 minutes, including a Roofe shot which hit the post before bouncing into the grateful arms of Stuart McKenzie.

Having stemmed those early waves of attacks, Cove got a bit too cocky as they again tried to build up from their own box.

It proved to be a costly mistake as Gers pounced on 24 minutes. Steven Davis regained possession from Adam Livingstone’s heavy touch and Rangers ruthlessly sprung forward. Glen Kamara fizzed the ball into Defoe’s feet, with the 38-year-old spinning past Fyvie before drilling home with a low drive.

Another self-inflicted error cost Cove the second seven minutes later. Broque Watson and Daniel Higgins got themselves in a muddle as Bassey applied pressure. Defoe took over, sweeping the ball to Scott Arfield’s feet. McKenzie saved the midfielder’s effort but Roofe was there to turn home the rebound.

The former Leeds ace had another 60 seconds later as he darted across Higgins to turn home Wright’s ball to the front post.

And Gers were four-up two minutes before the break as Cove again failed to learn their lesson. With his team already under a heavy press, Higgins attempted an ill-judged square ball across his own box, with the inevitable result as Patterson stole ahead of Livingstone to tuck home his second goal for the club.

The visitors’ afternoon took another turn for the worse when Masson had to be stretchered off with a nasty ankle injury after his studs caught in the turf just on the hour mark.

But at least there was no further damage to the scoreline despite another second-half bombardment that saw Defoe, Connor Goldson and Cedric Itten come close.

Ties to be played over weekend of April 17

Stranraer vs Queen of the South or Hibernian

Ties to be played over weekend over April 24

Rangers or Celtic vs St Johnstone or Clyde

Kilmarnock or Montrose vs St Mirren or Inverness

Aberdeen or Livingston vs Forfar or Dundee United