Talk about a redemption story. And one that took just 16 seconds to tell.

For Nathan Patterson, this was a night to celebrate. Within the confines of his own home, of course.du

Eleven days after he breached Covid regulations by being among five players who attended a house party in Glasgow’s west end, Patterson found himself back on the Rangers bench. 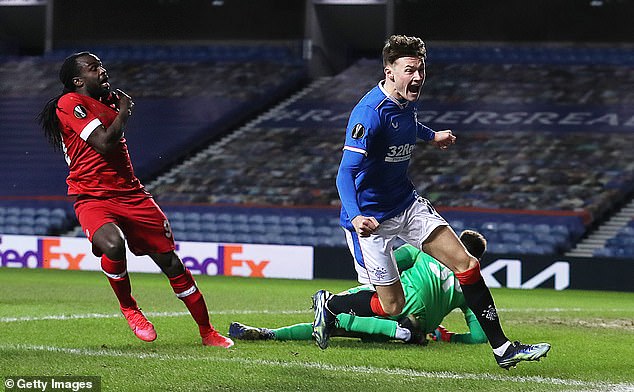 He had only resumed training on Wednesday at the end of his isolation period. That had also been the cue for he and his fellow sinners to issue public apologies for the actions.

All had been fined. All had potentially placed their Ibrox futures in doubt. But when Leon Balogun endured a torrid first half against Antwerp, Patterson was given a chance by Steven Gerrard to remind everyone just why he is such a highly-rated young footballer.

It was immediately grasped. Almost straight from kick-off in the second period, Patterson latched onto a pass from the outstanding Alfredo Morelos and slotted a fine shot beyond Ortwin De Wolf. It was the 19-year-old’s first senior goal.

You would normally say you couldn’t make it up. But this extraordinary plot twist was perfectly in keep with an utterly bonkers tie that turned every which way over two remarkable legs before depositing Rangers in today’s draw for the Europa League last 16.

It’s possible that next round might be Patterson’s only remaining outlet this season. The SFA are expected to act against all the Covid breachers, having hammered Ibrox colleagues Jordan Jones and George Edmundson with seven-game bans in November. Only eight Premiership games remain as Rangers close in on the title.

Patterson’s redeeming contribution was not the only headline act on a night of more free-scoring drama. Morelos was simply superb.

Having provided three assists last week, the Colombian scored the second-leg opener and had a hand in three of the four goals that followed. On top of that, he gained Twitter accolades from Romelu Lukaku and others for his excellent sportsmanship. Once again, this was an evening that toyed with preconceptions.

Patterson and Ryan Kent bought Rangers breathing space amid the bedlam before late penalties from Borna Barisic and substitute Cedric Itten ensured Antwerp were polished off in style. Goals from Lior Rafaelov and Didier Lamkel Ze had earlier threatened to introduce an element of doubt.

And so Gerrard has guided the Ibrox outfit into the last 16 for the second successive season. It’s a serious feat. While hoping for a kinder draw than last term, they have earned the right to harbour ambition of going one step further. 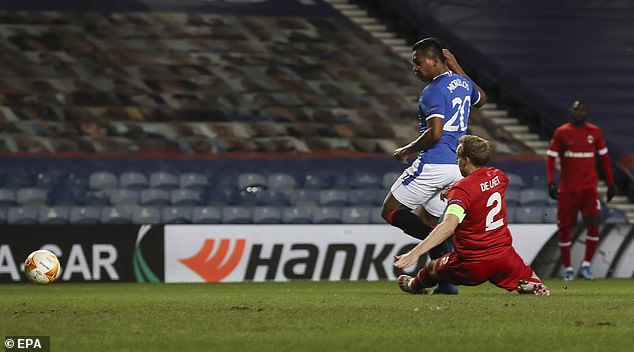 With injuries limiting options, Gerrard’s starting line-up contained no real surprises. More eye-catching was the make-up of his bench, where Covid breachers Patterson, Calvin Bassey and Bongani Zungu were all named.

Rangers didn’t waste much time in setting out their intentions. Ianis Hagi instigated an attack that saw Glen Kamara feed Morelos in a central position. The Colombian dabbed the ball left to Kent, whose shot on the slide was skewed beyond Ortwin De Wolf’s left-hand post.

Kent was in the mood. A low, left-foot drive from the fringe of the area was touched wide by De Wolf before he helped drive the ninth-minute breakthrough.

Gerrard’s demand for his players to press high was audible. And it worked a treat after Connor Goldson launched a forward pass up the right flank.

Hagi hustled Maxime Le Marchand, forcing him to knock inside for Jeremy Gelin. When the centre-back tried to get out of trouble with a back-pass, Kent was immediately on him. 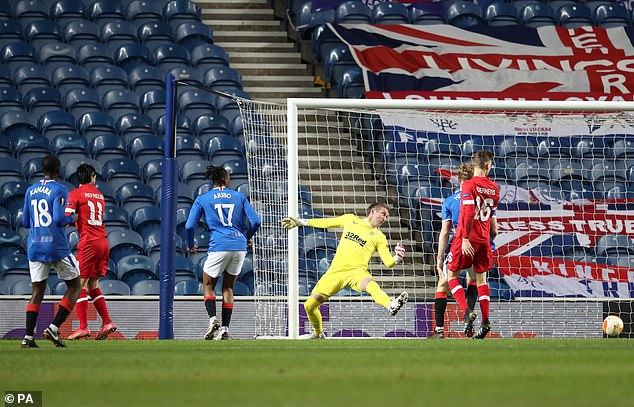 Antwerp pulled a goal back just past the half-hour mark through Lior Rafaelov (left, no 11)

Nicking the ball away, he looked up to pick out Morelos with an inch-perfect cutback. The striker did the rest.

Antwerp needed to score three now. But were more in danger of conceding again.

A lovely turn and through-ball from the Kent gave Morelos something to hunt. This time, Le Marchand halted him with a clattering challenge.

All of the Ibrox front three looked ravenously hungry. Hagi was next to try his luck with an almighty thump that De Wolf parried at his near post.

Rangers’ control was such that an increased advantage seemed only a matter of time. We should have known better. This tie never followed a simple path. 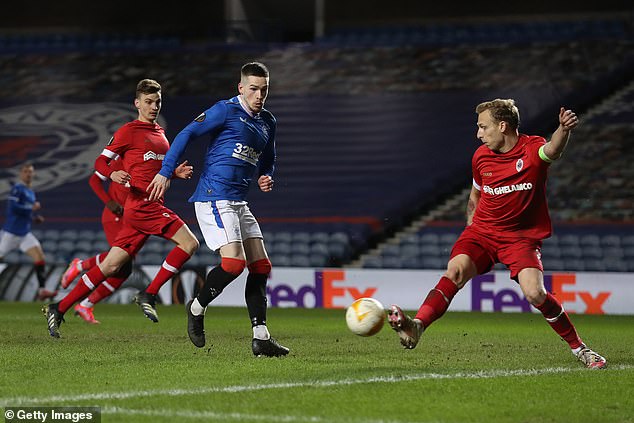 The first sniff of an Antwerp threat arrived just before the half-hour. Jordan Lukaku crossed deep from the left for their other wing-back, Aurelio Buta. Given too much space by the Ibrox defence, he could have done better than blaze wide.

If that was a warning, it wasn’t heeded. The Belgians drew level on 31 minutes through a rather similar route.

Lukaku beat Balogun too easily by chopping back onto his left foot and sweeping the ball across goal. Rafaelov met it with the outside of his boot for a dainty conversion.

Balogun was starting to toil. A challenge on Lamkel Ze earned the Nigeria international a booking that rules him out of the last 16 first leg.

Lukaku again got past Balogun on a 44th minute charge but hammered his shot into the side-netting. The early control enjoyed by Gerrard’s men had temporarily vanished. 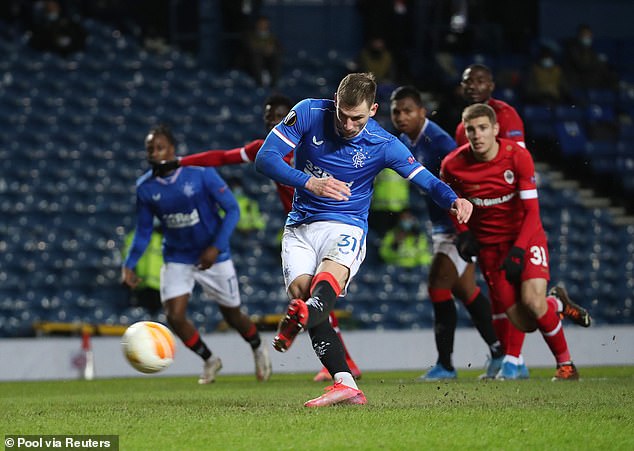 It might have been restored right before the break had Morelos not stopped a dangerous attack on his own accord after Gelin collapsed to the turf holding his hamstring. His fair play was worthy of applause.

Gelin was substituted at the interval. As was the struggling Balogun. And what an extraordinary impact Patterson made as Antwerp were caught cold from kick-off.

Hagi robbed the ball from Le Marchand and fed Morelos. He rolled in Patterson with a perfectly weighted pass and the youngster tucked terrific finish into the far corner of the net.

Rangers were back on top again, their front three creating carnage. On 55 minutes, Hagi spun away from a couple of challenges before finding Morelos. The striker skinned Martin Hongla and provided a low cross for Kent to slam home. It was a brilliant move. 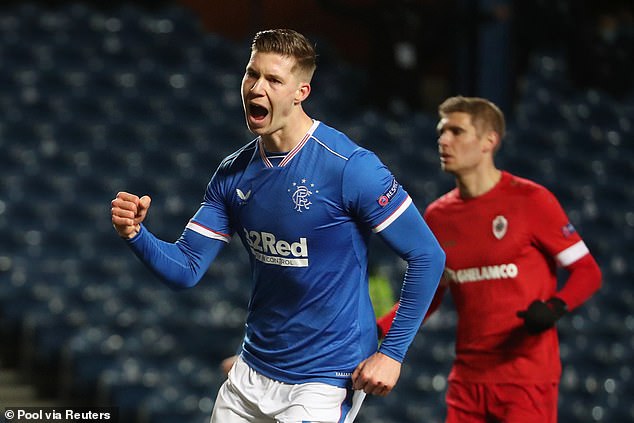 Surely now it was done? Well, almost. Two minutes later, Antwerp had one back.

When Morelos was felled by Le Marchand, Barisic stepped up to thump in from the spot on 79 minutes.

A foul on substitute Scott Wright led to the second penalty in stoppage time, which was powerfully converted by Itten.

Man City will give Liverpool a guard of honour at the Etihad, says Pep Guardiola

Mario Lemina on Pierre-Emerick Aubameyang friendship, why he owes Fulham and the handball rule he caused