Jack Simpson is set to make his Old Firm debut while James Forrest has been declared fit; watch Rangers vs Celtic live on Sky Sports Football and Main Event on Sunday; coverage starts at 11am with kick-off at 12pm Team news and stats ahead of Rangers vs Celtic in the Scottish Premiership on Sunday (kick-off 12pm).

Rangers defender Jack Simpson is set to make his Old Firm debut on Sunday after Filip Helander was ruled out for the remainder of the season.

Ibrox boss Steven Gerrard confirmed Helander will play no part in his side’s final three games of the campaign – starting with Celtic’s Ibrox visit this weekend.

However, Gerrard remains confident the Sweden international will still make this summer’s Euros, despite suffering a knee injury against St Johnstone last week.

The centre-back limped off in extra-time as last weekend’s shock Scottish Cup quarter-final defeat to Saints went to penalties.

With Leon Balogun and long-term casualty Nikola Katic also unavailable, it means former Bournemouth defender Simpson is now set for a derby baptism of fire as he makes just his second Rangers start since moving to Glasgow in January.

Scott Arfield sat out the spot-kick defeat to Saints with an ankle knock and has also been told his season is over.

Celtic winger James Forrest has been declared fit. The Scotland winger had a long spell out after ankle surgery this season, then picked up a back and hamstring niggle on his return which kept him out of the last two matches.

Captain Scott Brown will play in his last Old Firm game before joining Aberdeen as player/assistant next season.

What the managers have said

Rangers boss Steven Gerrard: “It was an early stage to win the title, and the challenge since then has been to try to keep the players motivated all the way until the end. The good thing from our point of view is that there are still things that we want to achieve as a group.

“We want to try to set a new clean sheet record if possible, and we want to go the season unbeaten. We’ve got a big game to look forward to this weekend. I want to keep the players as motivated as we can but it is a unique situation. Naturally, there will be certain players who’ll come away a bit to where they were previously as what we were trying to achieve was so important.

“The Old Firm always helps in terms of getting players in the zone. The players are aware of how important the fixture is and we want to try to finish as well as we can. You always want to beat your rivals, and after the set-back[against St Johnstone], which stung a lot, hopefully we can bounce back at the weekend.”

Interim Celtic boss John Kennedy: “We can use [ending the champions’ hopes of an unbeaten Premiership campaign] as motivation but we ultimately have to judge ourselves in terms of what we do. What we haven’t done, in the last two games especially, is be ruthless in the vital moments of the game and take our chances and change the dynamic of the game.

“Especially in the last game, we gave two goals away which put us on the back foot and then with the big moments, when we had chances to get ourselves back in the game, we didn’t take them. So we have to be more clinical.

“When you are more clinical it breeds a higher level of confidence and you see more flow in your football. These are the challenges we’ve faced of late. We’ve not quite been ruthless enough and that changes the whole dynamic.

“The performances are still stable but we have to be better in both boxes, not giving anything away at our end and being ruthless at the top end. We want to go out on Sunday and be free in our play but be very organised and know what we’re doing and go back to showing what we really are.”

‘Rangers are already in Celtic’s heads’

“Looking back to last summer and rumblings about players wanting to leave (Celtic), I think Rangers have been focused; focused on the job each individual needed to do. The big job was to stop 10 in a row and they did that. There’s a group of players who were hungry in there.

“With the goings on at Celtic, the disappointment of some results and players wanting to leave in the window and it never materialised. I think that had an effect on the dressing room. Rangers just kept going about their business. They showed with the quality they have on the pitch as well. They had unbelievable performances. 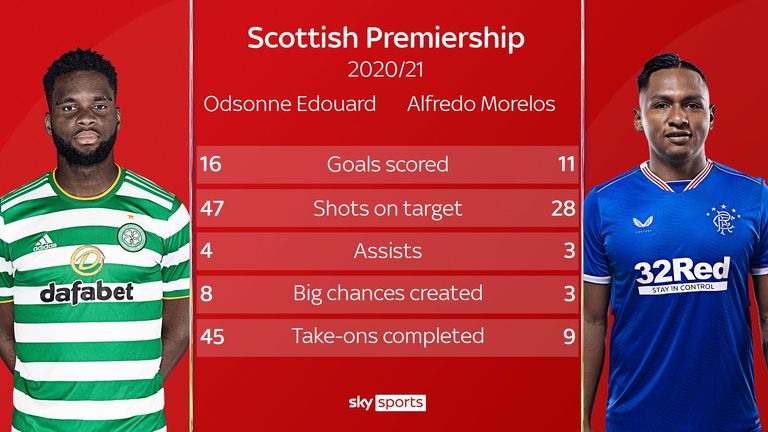 “When you come up against Celtic you’ve got to be at it and every Old Firm they have been. Listen, Celtic have done well in the last couple of Old Firm games, which is expected but at the end of the day it’s all about winning games and Rangers have managed to do that.

“Rangers are in Celtic’s heads because of what they’ve done. But come Sunday, form goes out the window, I’ve said it a number of times.

“It’s how you set up. We know Rangers will play 4-3-3. Will Celtic go with the diamond again? They’ve had a little bit of success, performance-wise, over the last couple with that.”