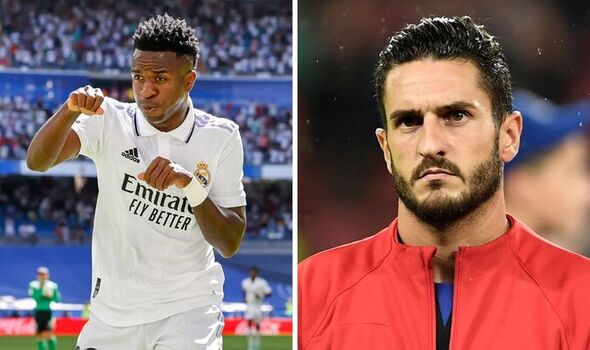 Real Madrid have instructed their lawyers to take legal action against anyone who directs racist abuse towards their players after Vinicius Jr was the subject of sickening remarks ahead of the Madrid derby. The Brazilian has been a major talking points in the past few days after Atletico Madrid captain Koke made a threat towards the attacker over his celebratory dancing ahead of Sunday’s meeting at the Wanda Metropolitano.

Vinicius has carried his exceptional form from last season into the 2022/23 campaign having found the net five times in seven matches in all competitions this term.

The 22-year-old has been making his own mark on La Liga with his trademark celebrations – dancing by the corner flag while he is embraced by his team-mates.

But Koke isn’t prepared to stand for the antics, should Vinicius decide to taunt Atletico this weekend.

The Spaniard said: ““At the end of the day if he scores a goal and decides to dance it’s his call. To each his own and everyone celebrates the way he likes,” said Koke. 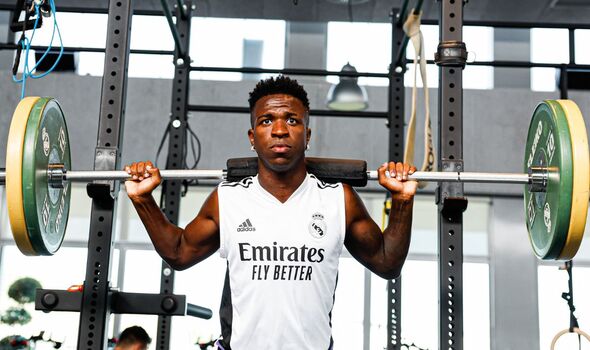 Before later adding: “There would be trouble for sure [if Vinicius dances], it’s normal.”

Since Koke’s comments, Vinicius Jr has been subjected to racial abuse both online and from Pedro Bravo, the president of the Spanish agents association, who has been forced to retract his statement after accusing the Brazil international of “playing the monkey”.

Several key figures and clubs – most notably Vinicius’ international team-mates with Brazil – have rallied around the youngster to issue their support.

Now Real Madrid have backed their superstar by threatening to pursue legal against any future perpetrators.

A club statement read: “Real Madrid C. F. condemns all types of racist and xenophobic language and behaviour in football, sport and life in general, such as the regrettable and unfortunate comments made against our player Vinicius Junior in the last few hours.

“Real Madrid would like to express its affection and support for Vinicius Junior, a player who regards football as an attitude towards life through joy, respect and sportsmanship. Football is the most global sport there is and should be a model of values and coexistence.

“The club has directed its legal services to take legal action against anyone who makes racist remarks towards our players.”

Neymar was among those to issue their support for Vinicius, tweeting: “Dribble, dance and be yourself, happy to be who you are! Go for the top, my friend, we will dance on your next goal.”

Brazil legend Pele also sent a message to his compatriot: “Football is joy. It’s a dance. It’s a real party. Although racism still exists, we will not allow that to stop us from continuing to smile. And we will continue to fight racism this way: fighting for our right to be happy.”

Meanwhile, Newcastle midfielder Bruno Guimaraes urged the authorities to take action against the disgraced Bravo, writing: “This MORON needs to leave this place arrested! No excuses. If a guy says this on live TV, just imagine what he says when he’s not. Inconceivable if this guy is not jailed.”

Real Madrid boss Carlo Ancelotti takes no issue with Vinicius’ dancing, stating he will protect all of the club’s players.

“I see a great player demonstrating his talent – that’s it.” Ancelotti said.

“I’m not deaf and I’m not stupid, I can hear what is being said but this isn’t a topic for us or for Vinicius. He has extraordinary quality and it’s normal that opponents try to stop him in his tracks and the rules of the game are there to protect all players, not just Vinicius.”

Is Manchester United vs Tottenham on TV today? Kick-off time, channel and how to watch Premier League fixture

Man Utd and Arsenal both interested in signing Southampton star