INCIDENT: Late in the first half, Sadio Mane’s shot cannoned into Reece James’ arm off his knee on the goal-line, before the defender appeared to try to flick the ball away with his hand. Referee Anthony Taylor consulted the pitchside monitor on VAR’s advice and awarded Liverpool a penalty as well as showing James a red card for denying a clear goalscoring opportunity.

DERMOT SAYS: “I think he could have stood at the screen for 20 minutes and he’d still have made the same decision.

“The evidence is clear to see. The ball does bounce up off his leg, but he swipes at the ball with his arm.

“You can see the image and you can also see his arm come out from behind the post so you know he’s swiped at the ball.

“It has to be a red card because of the fact he’s handled the ball on the goal line. It falls into the line of denying a goal. It’s instinctive, he thought the ball was going in the goal and he swiped at it.” 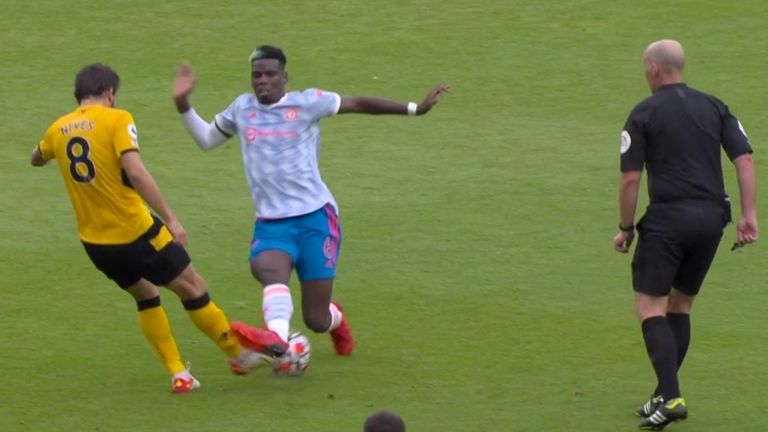 INCIDENT: Leading up to Mason Greenwood’s winning goal, Paul Pogba caught Ruben Neves on the shins in an apparent foul. However, despite Wolves protests, the goal stood and no cards were shown.

DERMOT SAYS: “This has really split people. When I saw the incident yesterday, I didn’t think he touched him. When I’ve seen it again, he has, he’s definitely clipped his shin pad.

“But I thought it was minimal contact. Mike Dean is in the best position and he’s got a perfect view. The other thing I’d say about the referee is that I think he knows how much impact there is because he’s so close. I think he’d hear it whether it was a glancing blow or whatever. 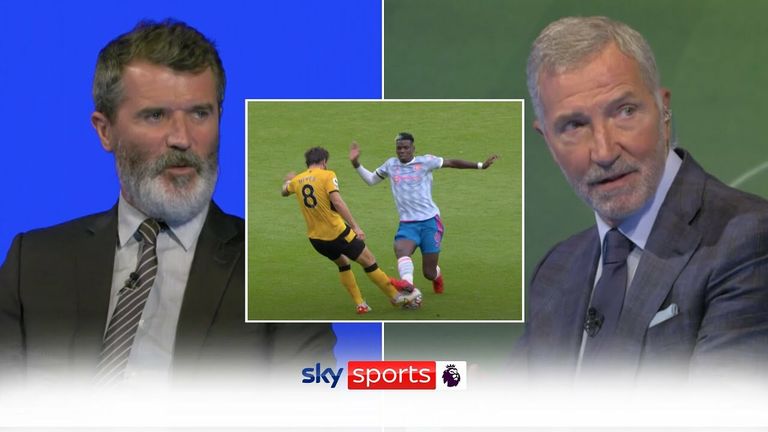 “But once the VAR looks at it and sees all the different components. He sees where Mike Dean is and Dean feeds back what he is seeing, I think the VAR has to leave it to the on-field referee’s decision.

“It’s about how much contact he makes. There’s no doubt he makes contact because you see the pad move but I think it’s a glancing blow. Other people I’ve spoken to think it’s a very bad tackle.”

DERMOT SAYS: “As a referee, you are looking at the speed, the distance he’s come and the intensity.

“This is what you call someone who was airborne and out of control. He has no control over his body, there is no doubt about that.

“He comes flying through the air and just that intensity alone would send warning bells into the referee’s mind.

“You make contact with the player and it’s a red card. Winning the ball is a bonus because he’s gone through the air. He has little chance of doing anything but endangering the safety of an opponent.” INCIDENT: Man City’s second goal was reviewed by VAR after a possible foul from Ferran Torres on Calum Chambers in the build-up. However, the goal was allowed to stand, much to the annoyance of Arsenal manager Mikel Arteta.

He told BT Sport after the game: “I am very disappointed with the second goal because of the way that they allowed that goal.”

DERMOT SAYS: “I think both players are reaching for each other. They both make contact with each other, there’s no doubt about it, and then you have to decide if they are both equally culpable, which the referee does.

“Or has one been an aggressor, which he felt they hadn’t, and I thought he was right to play on.”

INCIDENT: Norwich thought they had grabbed a late equaliser through a Kenny McLean header. However, VAR was once again involved and the goal was ruled out because of a tight offside against Todd Cantwell, who was stood right in front of Kasper Schmeichel

INCIDENT: Caglar Soyuncu was adjudged to have fouled Pierre Lees-Melou in the penalty area after a VAR review, handing Norwich a penalty. Teemu Pukki converted to equalise just before half-time.

It’s interesting because VAR overturned two penalty decisions on Saturday, the other one at Newcastle and I didn’t think they were too different. So, they were consistent there.