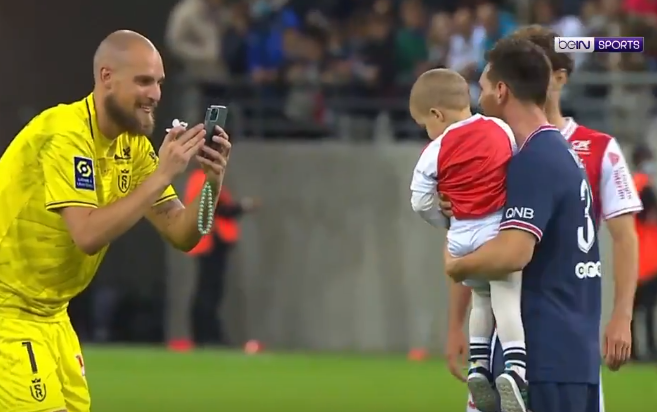 Lionel Messi was involved in a bizarre post match incident after making his eagerly anticipated PSG debut after he was asked to pose for a photo with the son of Reims goalkeeper Predrag Rajkovic.

The Ligue 1 giants stunned world football earlier this month when they capitalised on the financial chaos which has engulfed Barcelona and signed their now former totemic leader on a free transfer.

After a hectic summer, during which he led Argentina to an historic Copa America success, Messi has been forced to bide his time to make his first appearance for his new club.

Messi was named among the substitutes as he made Mauricio Pochettino’s matchday squad for the first time on Sunday evening, and was finally introduced to the fray with 25 minutes remaining in place of his great friend and former Barcelona teammate Neymar.

Two goals from Kylian Mbappe, who has been the subject of two world record bids from Real Madrid over the course of the last week, had already set the visitors on their way to three valuable points which helped PSG register their fourth successive win of the new campaign.

Messi made several impressive contributions during his relatively short cameo but will have to wait for his first goal in PSG colours until after the international break when he will make his home debut against Clermont.