Arsenal reminded Rio Ferdinand of a Pep Guardiola team during the FA Cup semi-final against Manchester City on Saturday. Arsenal boss Mikel Arteta went up against a City team he left in December 2019 following over three years as Guardiola’s assistant at the Etihad. Many believe Arteta wants to adopt a similar style of play to that of his Spanish compatriot.

City dominated much of the first half at Wembley, with Arsenal largely playing on the counter attack.

But Ferdinand says Arsenal’s opening goal through Pierre-Emerick Aubameyang reminded him of many scored by City under Guardiola.

The move started with goalkeeper Emiliano Martinez and 17 passes later Aubameyang had the ball in the back of the net, expertly turning in Nicolas Pepe’s cross.

Ferdinand says it is clear how Arteta wants his team to play and does not expect him to change even if it goes wrong at times. 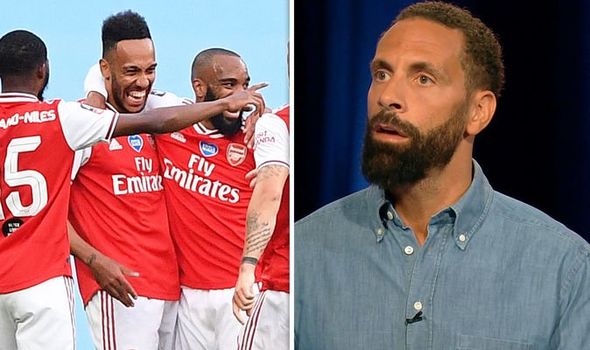 “Well the goal would suggest that [Arsenal played like City],” Ferdinand said on BT Sport.

“I think in larger parts of the first half you wouldn’t say it’s Man City football but the goal definitely, definitely speaks and shouts Man City, Pep Guardiola-esque type football.

“They were almost creating their own problems here, not going long, not missing out the press.

“[Shkodran] Mustafi here takes a chance, gets caught and you think: ‘What are you doing? Play the ball forward, don’t take chances in your box’, they should have been punished there.

“And actually, now you’re think they will be a bit more conservative and go a bit longer maybe but no, you can see Arteta’s got his philosophies, he’s got a way that he wants them to play, a style of football and they’re going to stick to that through thick and thin.

“And the goal is the reward that you get, it’s perfectly executed here. Seventeen passes for that goal.”

“Arsenal is playing really, really well. On the ball but as well off the ball. They’re confident on the ball,” Van Persie said.

“Pepe here, he knows where Aubameyang is, fantastic cross, and to hit this with the outside of his foot is really special because most players here go with their left.

“It shows you how great he is to go for the most difficult solution.

“To go there with a bounce, with the outside of his foot, the chances of this ball going in are really slim. So it just tells you how great a player he is.”