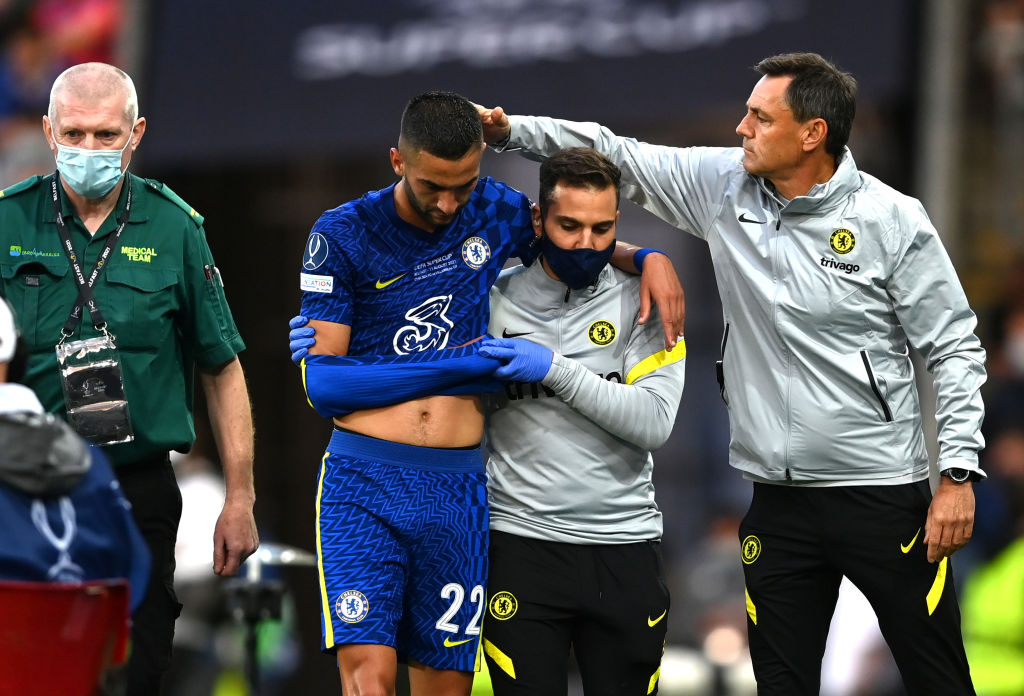 Rio Ferdinand bemoaned Hakim Ziyech’s ‘disappointing’ shoulder injury in Chelsea’s Super Cup meeting with Villarreal and urged the midfielder ‘do his rehab and protect himself’ to ensure a strong return.

Ziyech opened the scoring with a smart close-range finish at Windsor Park but the 28-year-old’s night was brought to a premature end as he was forced off in the 43rd minute.

The Morocco international appeared to be caught by Juan Foyth’s arm before landing awkwardly and looked in serious discomfort as he was administered oxygen on the pitch by Chelsea’s medical staff.

Christian Pulisic came on to replace Ziyech soon after and the latter was pictured wearing a sling as he watched on from the substitutes bench in the second half in Belfast.

It’s just the latest setback for Ziyech, who missed a large part of last season – his first in England – with separate hip and knee problems.

Reacting to Ziyech’s injury, BT Sport pundit Ferdinand said: ‘A lot of injuries happen like that, when you least expect it. He’s not even in touch with the ball and Foyth – who was marking him – just jumped and didn’t know where Ziyech was.

‘His arm was above his shoulder and he’s just thrown it out.

‘It’s disappointing as he’s had a really good pre-season but this was an important season for him.

‘We spoke about Havertz and Werner struggling after their first season. Ziyech was the same. He didn’t get to the heights of his Ajax form and was looking to do that this season.

‘It started today with a goal but it was cut short through injury and it’s disappointing for him.’

Ferdinand fears Ziyech’s shoulder may be a ‘weakness’ going forward but hopes the ex-Ajax star looks after himself and takes his rehab seriously.

The former England and Manchester United defender added: ‘I played with a number of players who struggled with shoulder injuries.

‘Rafael Da Silva did it at Manchester United and it’s an injury that can just happen again and again.

‘No matter what rehab you do, you can be diligent with your rehab but it can still be a weakness when you go out there and play.

‘He’ll have to do his rehab and protect himself.’