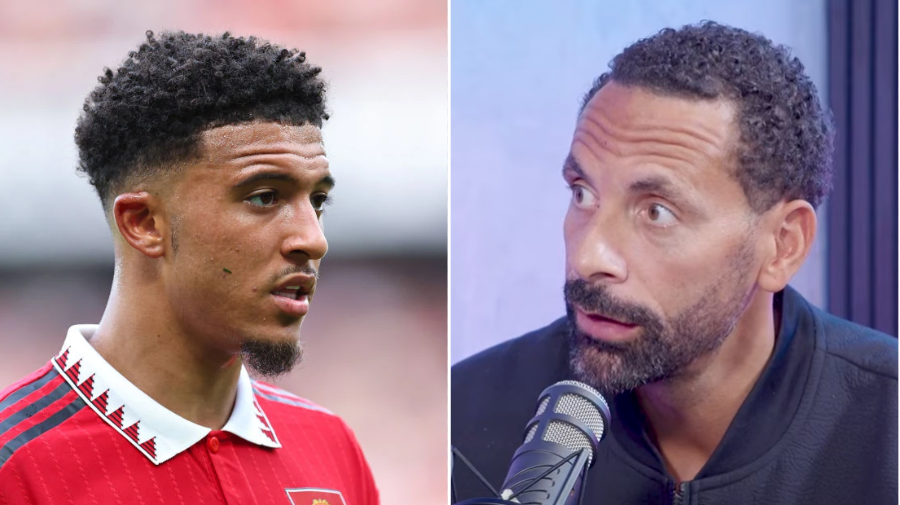 Rio Ferdinand insists he is struggling to understand Gareth Southgate’s decision to omit Jadon Sancho from his latest England squad.

The Manchester United winger has rediscovered his best form this season following the arrival of Erik ten Hag at Old Trafford and has played a key role in his side’s revival under their new manager.

Sancho featured prominently during the early part of Southgate’s reign but has been gradually phased out post Euro 2020 where he was one of three players to miss a penalty in the shootout against Italy in the final.

Responding to Sancho’s latest omission ahead of tonight’s Nations League clash against the Azzurri, Ferdinand claimed Southgate would have a major rebuilding job on his hands were he to have a change of heart and pick Sancho again ahead of the World Cup.

He told Vibe: ‘He’s sitting there thinking what more do I have to do? He didn’t like him when he was on fire so he must be thinking that’s the problem with Jadon Sancho, there’s going to be a mental block.

‘Jadon will be thinking I’ve forced him to put me in here anyway but he isn’t going to play me. And when he does play me he doesn’t really want to play me.

‘Those are the thoughts that will go through his head. Mentally he’s a hard one to get back if he ever gets back in the squad.’

While Southgate has ignored the credentials of the in-form Sancho, he has stuck by much-maligned United skipper Harry Maguire who has maintained his place despite having been dropped by Ten Hag.

‘You always have to back your judgement and we feel he is an important player,’ said Southgate, who joked he was putting ‘whatever reputation I have’ on the line by picking Maguire.

‘He is our most dominant aerial centre-back. Him and John [Stones] are incredible with the ball.’