Riyad Mahrez has teased Manchester City fans over a possible summer transfer for Borussia Dortmund star Erling Haaland. The Dortmund striker is one of the most in-demand players in the world, with some of Europe’s biggest clubs said to be pursuing his signature in the transfer window.

Haaland scored a staggering 41 goals in as many games last season and has been linked with a blockbuster transfer away from the German club in the off-season.

The 20-year-old’s agent, Mino Raiola, has already visited Barcelona and Real Madrid to assess the Spanish giants’ interest in his clients.

Manchester City, Manchester United, Liverpool and Chelsea are all also understood to be considering a bid for the forward.

City are on the lookout for a replacement for Sergio Aguero, who is joining Barcelona as a free agent next month when his City contract expires.

Pep Guardiola’s side are bound to be working hard on potential new arrivals and it seems Mahrez might have provided them with an unusual advantage in the transfer race. 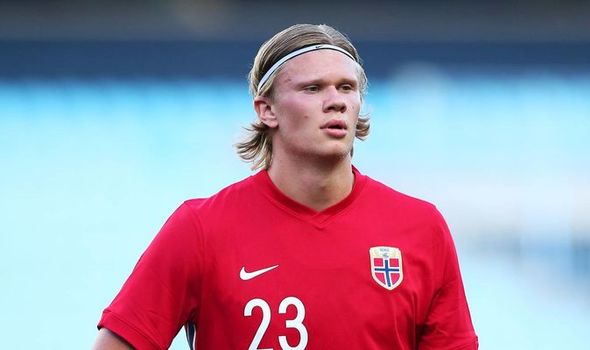 The Algerian winger is currently enjoying some time off following a demanding and intense campaign and is on holiday in Greece.

Coincidentally, so is Haaland, who is not competing at Euro 2020 after Norway did not qualify for the competition.

The two players have bumped into each other on the Greek island of Mykonos, where they were videoed partying in a waterside bar.

After the footage from Instagram went viral, Mahrez stoked the flames of transfer gossip by writing on Twitter: “Agent Mahrez on duty” alongside some laughing emojis.

With that tweet then receiving 75,000 likes, the Man City star felt the need to add: “just having fun calm down”.

Whether Mahrez’s contact with Haaland makes any difference, Man City have made it clear they will go for a big name to replace Aguero this summer.

“Sergio Aguero’s shoes are very hard shoes to fill, but I am confident we will find the right player to fill those shoes,” chairman Khaldoon al-Mubarak said earlier this month.

“There are other areas in the team that need investment. Not too many – it is not about numbers, it is about quality.”

Haaland has a soft spot for Man City because his father, Alf-Inge, played for the club between 2000 and 2003, but that fact could prove irrelevant if Dortmund refuse to sell him.

The German giant’s sporting director Michael Zorc insisted recently the club were planning to keep him for the 2021/22 campaign.

“I like to stick to what the contractual basis looks like and how the direct discussions were held last week,” he told Sport1.

“We have very clear plans to go into the new season with Erling.”