The morning after the night before! Robert Lewandowski wakes up next to Champions League trophy as Bayern Munich star celebrates Lisbon triumph after win over Paris Saint-Germain

Robert Lewandowski has posted a picture of himself waking up next to the Champions League trophy after Bayern Munich overcame Paris Saint-Germain to win their sixth European title.

The Bundesliga champions were crowned kings of Europe in Lisbon, with a second half Kingsley Coman header the difference as Hans Dieter-Flick’s side got the better of the Parisians.

For Lewandowski, Sunday night’s triumph marked his first Champions League victory, having finished runners-up with Borussia Dortmund in 2013, when Jurgen Klopp’s side lost to Bayern at Wembley. 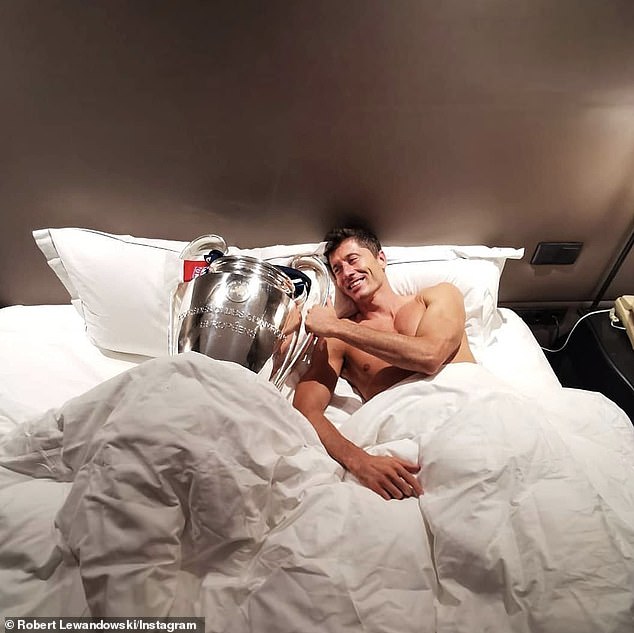 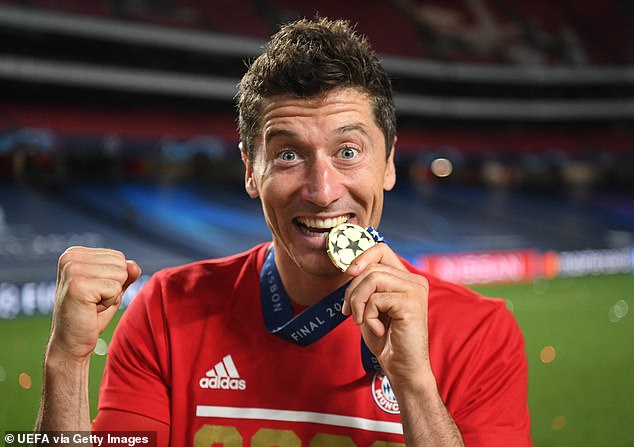 The Poland international has had his career-best season, firing 55 goals and 10 assists in just 47 outings for the Bavarian giants in 2019-20.

The 32-year-old would have probably been most disappointed with the cancellation of this year’s Ballon d’Or, with the striker a genuine contender to eclipse Lionel Messi and Cristiano Ronaldo for the top gong.

But Lewandowski didn’t look too disheartened on Monday morning, posting an image of himself in bed with the famous trophy to his 18.7m Instagram followers.

Despite there being no fans at the Estadio da Luz on Sunday, there was no shortage of excitement among the Bayern Munich stars as they celebrated their first European title in seven years in Lisbon.

French left-back Lucas Hernandez, who was an unused substitute during the final,  celebrated the mammoth win by placing the famous trophy over his head.

The team were also filmed by Hernandez singing along to ‘We are the Champions’ by Queen as they headed to their destination to keep the party going.

Alphonso Davies, whose stand-out moment of the tournament arguably came in the quarter-final with his phenomenal assist for Joshua Kimmich’s goal against Barcelona, was central to the celebrations.

Valencia 1-1 Cadiz: Javi Gracia's struggling side escape with a draw