COVID-stricken Socceroos coach Graham Arnold has been given yet another injury headache, with Tom Rogic seemingly in doubt for Thursday’s crunch World Cup qualifier against Japan.

In his final match before he was due to fly out for international duty, Rogic was violently scythed down and forced from the field in the first half of Celtic’s thumping 4-0 win by Ross County’s Kayne Ramsay, who was given a straight red card for the challenge.

Ange Postecoglou’s men were already three goals up by that stage and while the result keeps them clear on top of the Scottish Premiership table and on track for the title, Rogic’s ankle injury could have huge implications for the Socceroos and their World Cup hopes.

Postecoglou was optimistic about the prognosis post-match and expected Rogic would still link up with the Socceroos, but Arnold will be desperately praying the 29-year-old is fit enough to play – especially with so many other attacking options sidelined or unavailable.

“Tom’s a bit sore. Hopefully it’s not too bad and now he’s away with the national team. We will see how he is,” Postecoglou said post-match. “He got a knock on his ankle and it isn’t great but we got the ice on him at half-time and we seem to think it isn’t too bad.”

Players were due to begin assembling in Sydney on Sunday ahead of their showdown with the Samurai Blue and next week’s away clash with Saudi Arabia in Jeddah. The Socceroos need to win both be assured of automatic qualification for the World Cup in Qatar, otherwise they will need to win two sudden-death play-offs in June – against the third-placed team in Asia’s Group A, and then South America’s fifth-ranked team – to reach the tournament proper. 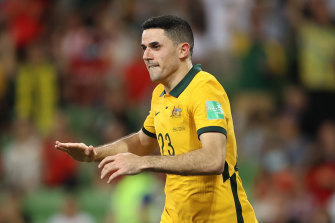 Tom Rogic is a player the Socceroos can ill afford to be without against Japan.Credit:Getty

It will take the best performance of Arnold’s second spell as coach for the Socceroos to reverse their uninspiring form to overcome Japan, a team they haven’t beaten in over a decade.

Rogic’s injury scare adds to a nightmare lead-in to this international window for Australia, with strikers Adam Taggart and Nikita Rukavytsya unavailable and attacking midfielders Aaron Mooy and Riley McGree out with COVID-19 and injury respectively.

If Mooy, McGree and Rogic are all out, the playmaking responsibilities could fall to Eintracht Frankfurt’s Ajdin Hrustic and former Olyroos star Denis Genreau, who has been consistently excellent this season for promotion-bound Toulouse in France’s second tier.

Arnold himself also returned a positive COVID-19 test last week, which means he won’t be on the sidelines at Accor Stadium on Thursday night or on the training pitch with his players in the preceding days.

The injury crisis prompted Arnold to take a punt on 35-year-old Uruguayan forward Bruno Fornaroli, who received his Australian citizenship this week and has been rushed into the Socceroos set-up in a move Football Australia chief executive James Johnson admits is reflective of the country’s youth development failures over the past two decades.