Roma are planning a triple raid on the Premier League.

The Serie A club, who now have cash to spend after their takeover this month by American billionaire Dan Friedkin, are targeting both Chelsea midfielder Jorginho, and Arsenal defender Sokratis Papastathopoulos.

Chelsea will sell Italian international midfielder Jorginho if the right offer comes in this summer – but want around £50million for the Brazilian-born playmaker.

The Italians are ready to part finance the deal by selling midfielder Amadou Diawara – an Arsenal target – for around £27m.

Greek international Sokratis is one of the players Arsenal manager Mikel Arteta is ready to offload this summer as he rebuilds his Arsenal squad – but Roma face competition from Napoli for his signature. 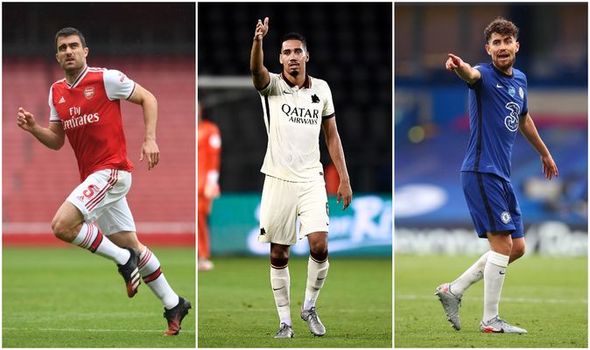 And Roma are also keen to make permanent the successful loan deal which saw Manchester United’s Chris Smalling have a good campaign in Serie A this year.

Roma chief executive Guido Fienga has already been in London this last week talking to clubs about deals.

Chelsea want to bring in funds to finance their moves for both Ben Chilwell and Kai Havertz, and Jorginho has found his place at Stamford Bride threatened by the emergence of 19-year-old Billy Gilmour.

Roma have already brought in one player from Chelsea this summer, with the signing of free agent striker Pedro.

The midfielder, who spent 2018-19 on loan at the San Siro and last season at Monaco, is set to move for a £3m loan fee, with the Serie A club having the option to buy for £30m at the end of the season.