Ronald Koeman’s representatives have hit out at Barcelona and president Joan Laporta’s apparent unwillingness to commit to the Dutchman, in a riddled social media post.

Rob Jansen, via his own Twitter account and that of the Netherlands branch of agency group Wasserman, criticised their approach following a meeting over the former Everton and Southampton boss’s future.

“Imagine: I want to marry you, but I have doubts,” he posted. “Give me two weeks to find a better partner. If I can’t find the right person, we will get married anyway!”

Koeman still has a year left on his contract at the Nou Camp and Laporta confirmed publicly they are “evaluating” the head coach, while Sky Sports News understands they are also assessing other options.

The ex-Holland boss was recently admitted to hospital following a panic attack and his representatives also move to allay fears over his health after Laporta commented in a press conference on Friday.

The company said: “The words of FC Barcelona’s president Joan Laporta during a press conference today about Ronald Koeman’s anxiety attack are overdone.

“Ronald has been to the hospital for blood pressure checks, a routine check for people with his medical history.

“We regret the way it got into the media. Ronald is fine, there is nothing to worry about.”

Discussing a range of issues ongoing at Barca, including Messi’s new contract, their financial problems, and signing new players, Laporta said: “We arrived halfway through the season and said we would give our evaluation of the coach at the end of the season. 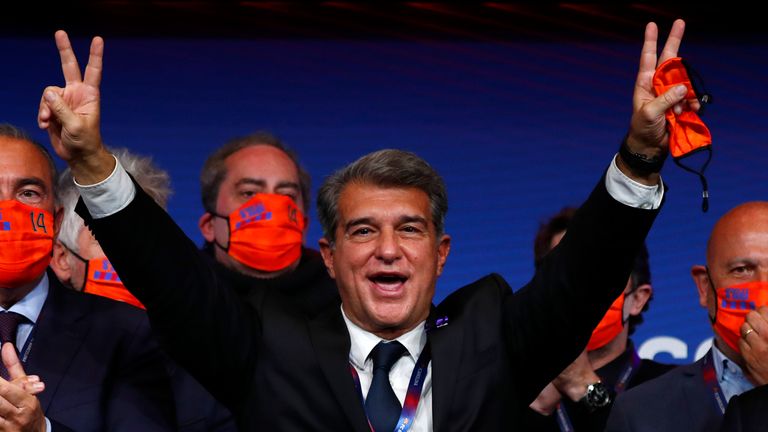 “We always worked with maximum respect towards Ronald Koeman, a player that won us that mythical European Cup at Wembley.

“He still has a contract in place and we said we do not believe in transitional seasons. We have spoken to him and will continue to talk to him to make further decisions.”

Sky Sports News has reached out to Barcelona for comment.

Messi’s current deal is due to expire at the end of next month, with the 33-year-old having remained at Barcelona for the 2020-21 season despite seeking a summer exit last year.

Former president Josep Maria Bartomeu told Messi he would only be allowed to leave if his €700m release clause was paid in full following a dispute over a clause in his contract.

Messi, who had been linked with Paris Saint-Germain and Manchester City, said back in December he would not make a decision about his future until the end of the season, and now with just weeks left on his contract, Laporta is hopeful of convincing the six-time Ballon d’Or winner to stay.

Macclesfield Town wound up in High Court due to debts over £500,000