No strikers? No problem. Not for a Celtic team who simply refuse to give in.

On a night of high drama and absolute bedlam in the Highlands, Anthony Ralston’s headed winner – with all six minutes of injury time elapsed – prompted a wild pitch invasion from away fans.

And a Hoops XI reduced to 10 men by the late dismissal of Carl Starfelt, a patched-up team without a single recognised centre forward in the match-day squad, kept themselves within four points of the lead with a sixth consecutive Scottish Premiership win. 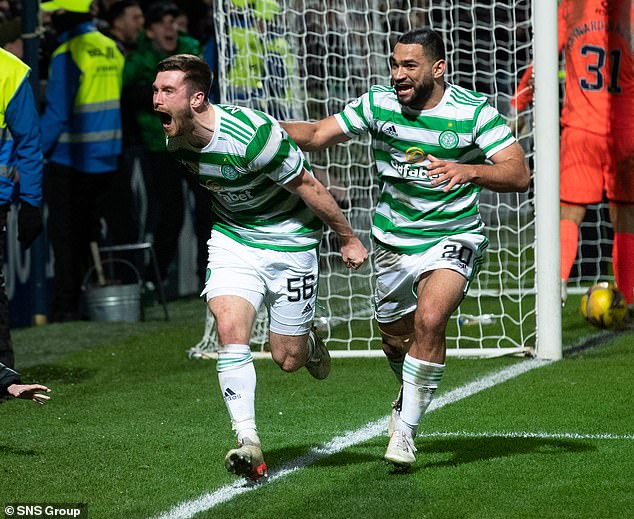 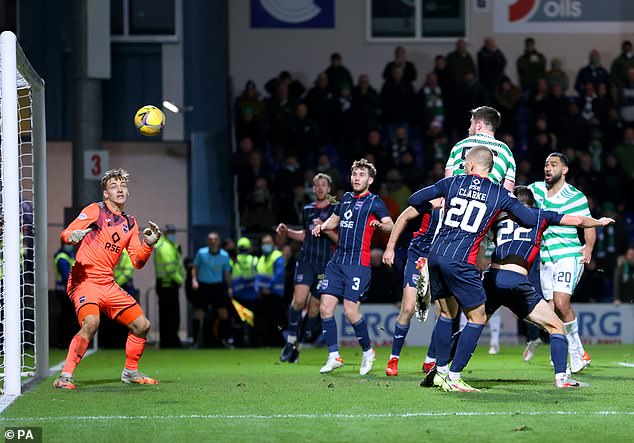 On a night when the controversial dismissal of Starfelt, unlucky to pick up his first booking for dissent after complaining of an alleged elbow to the face, Ange Postecoglou’s men found a way to get the job done.

A close-range finish from converted winger Liel Abada midway through the first half was cancelled out by Jack Baldwin’s equaliser just before the hour mark.

And that looked like the end of the scoring. Until substitute Tom Rogic somehow picked out Ralston in a crowded penalty box, setting up the young Scot for a moment of glory that he’ll never forget.

It was quite the end to a truly remarkable night. And some achievement for a side desperately short of firepower.

Oh, Celtic had plenty of wingers in their 18 stripped players. And a few youngsters who could be passed of as ‘attackers’. But nothing resembling an actual No 9 specifically suited to the dark arts of unsettling defenders.

Abada through the middle with full-back Josip Juranovic on the right wing? Needs must and all that.

Quite what watching Hibs coach Eddie May, here on scouting duties ahead of Sunday’s Premier Sports Cup Final, would learn from the performance was open to debate.

Against a County side unbeaten in their last four and entitled to feel a little buoyant after rising from the foot of the Scottish Premiership table at the weekend, Postecoglou needed one of his more adaptable all-rounders to answer an SOS. 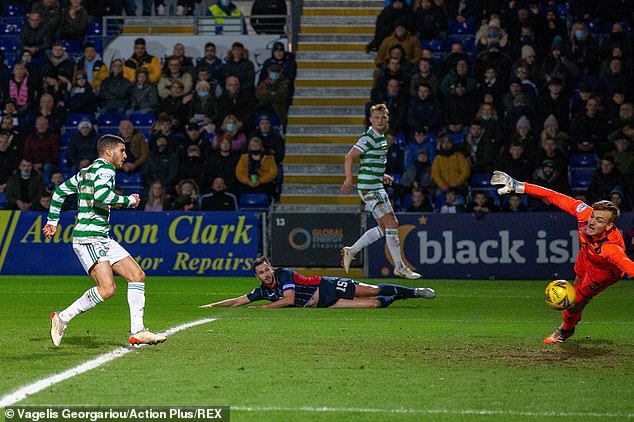 They’d be rightly wary of the threat posed by the Staggies, even without factoring in the Highland club’s part in last season’s annus horribilis for the Hoops; County famously knocked them out of the League Cup at Celtic Park, as well as recording a notable league win here in February.

Malky Mackay’s men, winners over Dundee on Saturday, knew they’d have to live off scraps for long spells.

And that’s how the opening stages panned out, with Celtic retaining possession and giving their out-of-position players time to adapt to their new roles.

Juranovic definitely embraced the spirit of life on the wing, looking determined to spend the entire night with his heels on the touchline. If his crossing wasn’t always spot on, well, it’s not so easy just to jump forward three lines in any team.

For all the improvisation going on in certain quarters, however, the opening goal was created by a move entirely typical of this Celtic side.

Callum McGregor was at the heart of it, naturally, picking up the ball in his stride and playing Irish full-back Liam Scales in down the left wing.

With 21 minutes gone, County suddenly had a whole different set of problems to face. Because the visitors now had their blood up.

Pouring forward at every opportunity, plunging passes into gaps between the ranks of blue-shirted defenders, Postecoglou’s men looked capable of quickly adding to their lead. 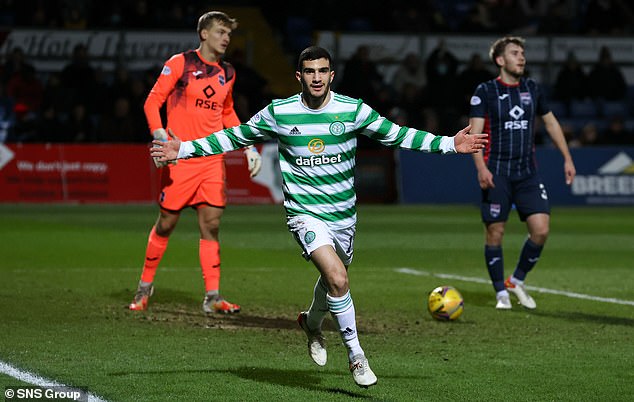 Abada’s raw pace and intelligent anticipation very nearly produced a second, the Israeli winger beating ‘rushie keeper’ Ash Maynard-Brewer to a Juranovic through ball – but attempting an impossible shot from a tight angle, rather than carrying possession into a more likely scoring position.

It’s one of Postecoglou’s abiding principles that his team stick to what they know. The thing they do best.

And so, while the faces may change, the patterns of play remain familiar. Not that knowing what’s coming makes life any easier for opponents.

With McGregor, Nir Bitton and David Turnbull as the midfield three, they did not lack of touch, wit or a desire to punish County at every opportunity

What the coaching staff wanted to see from all the good play, of course, was a second goal. At least. Something that might allow them to start resting players ahead of Sunday?

Scales scooped a left-footed shot over the bar from a good position after another clever intervention from McGregor just on half-time.

Bitton and Turnbull both came close soon after the break, as well, as the away side sought a tangible reward for all their possession and ambition.

Yet the introduction of Jordan White added a physicality to the front line that immediately unsettled Celtic.

It took a brave and timely Anthony Ralston block, for instance, to prevent another County sub, Dominic Samuel, from scoring after a smart turn; White’s mere presence at a long throw-in had created space for his team-mate in that instance.

And, from the corner conceded, Blair Spittal’s in-swinging delivery found Baldwin getting in front of Scales to score with a close-range shot. 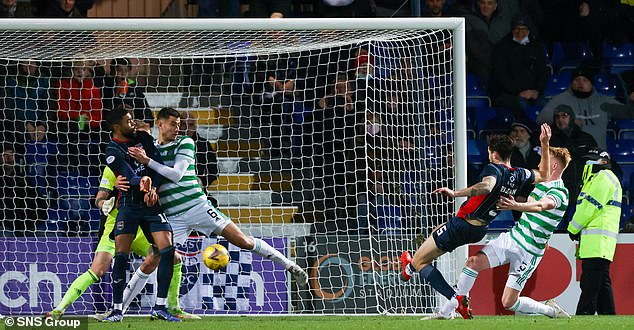 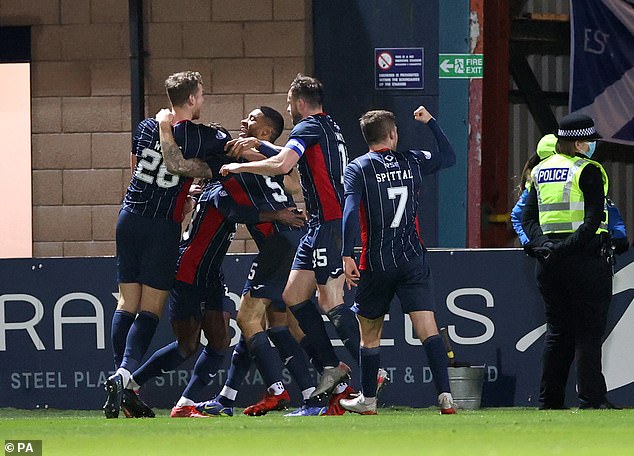 County had more than their share of play after the equaliser and, with Celtic pushing forward, they had chances to hit on the break.

The visitors began to look more than a little ragged and rattled, with Starfelt earning himself a booking for complaining about an alleged off-the-ball elbow to the face by County sub White.

The Swedish stopper had certainly been left on the deck and needing treatment.

Postecoglou reached for the obvious emergency measure, throwing Rogic on for the closing 15 minutes – and banking on his fellow Australian producing a typical moment of magic.

But the Hoops were quickly reduced to ten men when Starfelt, already on that earlier booking, simply took out Regan Charles-Cook as the winger sprinted in towards goal from the right flank.

They closing stages were absolute mayhem. Chances at both ends. Moments when the ball might have, maybe, could have squeezed over the line.

And then Rogic did what he does best. Brought composure to a crowed penalty area. Delivered a beautiful cross while being tightly marked. And then joined in the absolutely mental celebrations that followed. 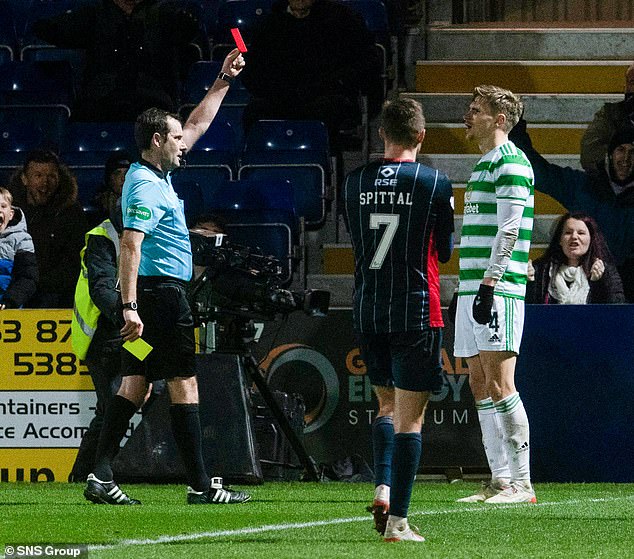