Barnsley made it four wins from five with a 2-1 victory over a depleted Rotherham in the Sky Bet Championship.

First-half goals from Cauley Woodrow and Alex Mowatt set up victory in the South Yorkshire derby for Valerien Ismael’s men.

Rotherham’s hopes of a first win over their neighbours since 1982 had been dented in the build-up to the game with a Covid-19 outbreak and an injury pile-up meaning they could only name six substitutes. 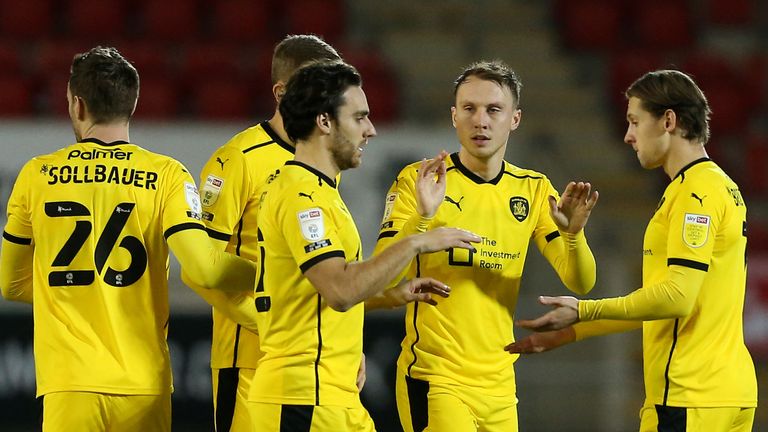 Among the absentees were former Red Angus MacDonald, Matt Crooks and Billy Jones as Rotherham returned to action after their last two games had been postponed.

Rotherham manager Paul Warne claimed the club faced a possible points deduction if the game had not gone ahead.

They started the better with Kyle Vassell firing in a low effort into the near post which Jack Walton had to push behind for a corner.

But Barnsley took the lead after eight minutes in classy style with Woodrow, whose dad once turned out for the Millers, finishing coolly after being picked out by Mowatt’s precision pass.

The visitors made it two after 15 minutes with another sweeping move. Woodrow picked out Callum Styles who then had the vision to tee up Mowatt on the edge of the box and the skipper curled an unstoppable effort into the far corner.

Rotherham’s response was to again be denied by Walton with the goalkeeper having to be alert as he dived at full length to stop Freddie Ladapo’s goal-bound effort.

Ex-Barnsley loanee Michael Smith was brought on for the second half to bolster the hosts’ frontline. Smith was quick to cause Barnsley’s rearguard some issues and he forced Walton into a smart stop.

Rotherham got back into it after 57 minutes with Smith rising highest to power in Dan Barlaser’s flighted corner.

The momentum was with Rotherham and Ladapo should have put them on level terms but he flashed his effort wide of goal after finding space on the left side of the penalty area.

Victor Adeboyejo should have restored the two-goal advantage at the other end after brushing aside Wes Harding but the young striker dragged his effort wide. Styles was the next to try his luck but his effort from a similar range was also off target.

Matt Olosunde’s volley from the edge of the box forced a save from Walton as Rotherham went direct in search of a leveller.

The best late chance fell the way of Barnsley as Styles picked out Woodrow from a free-kick but his volley was straight at Viktor Johansson.