Scotland learned something new on Friday night. There’s more to Lyndon Dykes than bruising encounters on an artificial pitch.

A surreal return to international football at Hampden brokered a promising debut for the Australian born striker. As a no holds barred campaigner at Livingston there was nothing sophisticated about the way Dykes did his job. He roughed up defenders and nicked the odd goal. He played to order.

There was evidence of more tools in the locker. Playing in a persistent problem position for Steve Clarke – alternatives were few – the 24-year-old showed why Queens Park Rangers boss Mark Warburton stumped up £2million to sign him. 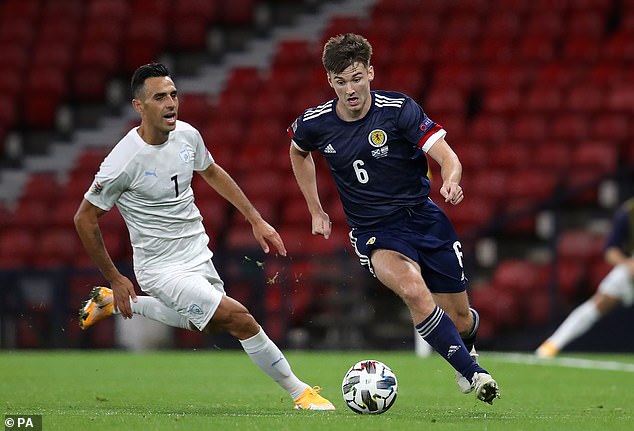 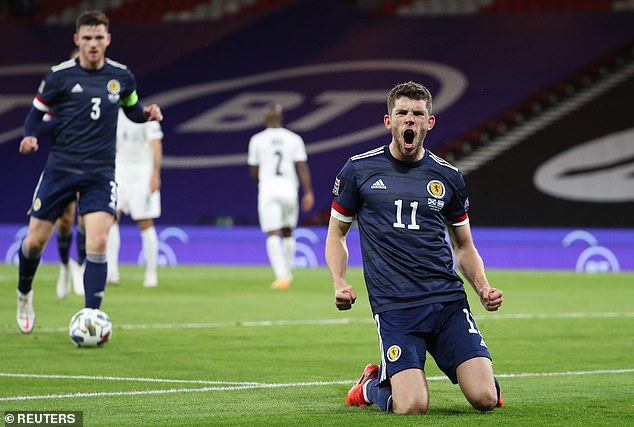 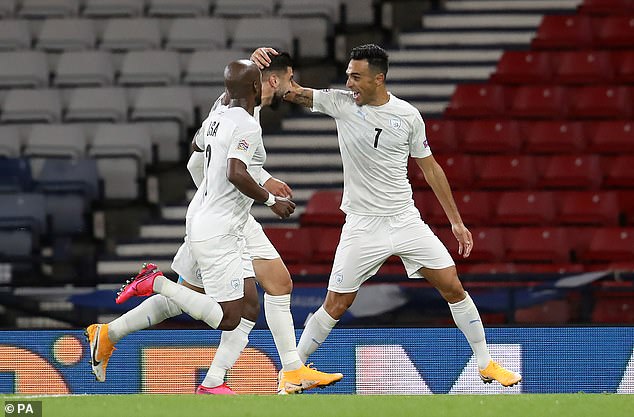 There was no debut goal. No victory to mark Scotland’s return to action after a ten month absence.

Yet, both before and after Ryan Christie’s first half penalty was cancelled out by an Israel equaliser from Eran Zahavi there were signs of an intelligent footballer.

In a persistent problem position for Scotland Dykes held up the play and brought others into the game before being replaced in the aftermath of Israel’s leveller after 72 minutes.

In truth, Dykes might have been one of the few bright spots on a strange old nights on Glasgow’s south side. Covid-19 restrictions forced the game to be played behind closed doors, Israel the more fluent and confident team in possession. 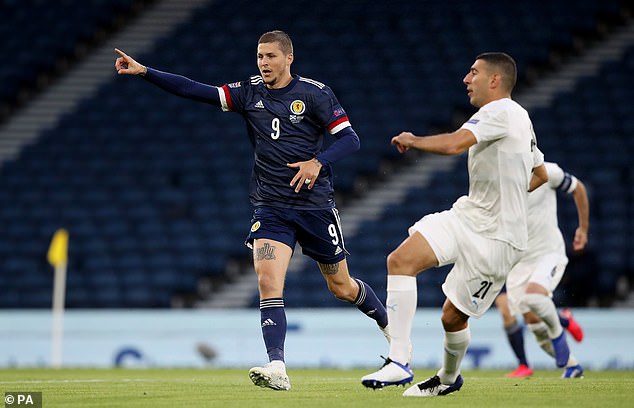 Lydon Dykes led the line for Scotland, with the 24-year-old putting in a strong showing

There was nothing here to suggest the Czech Republic on Monday will be anything other than a long, hard night.

For 43 minutes the game was as flat as an atmosphere deflated by the absence of the Tartan Army. The drama finally began before half-time.

At one end came a huge intervention from David Marshall and a let off for Scotland.

Marshall hasn’t played much football since leaving Wigan for Derby County, but needed razor sharp reflexes to react when Scott McTominay misjudged the flight of a probing Eli Dasa cross towards from the right flank. 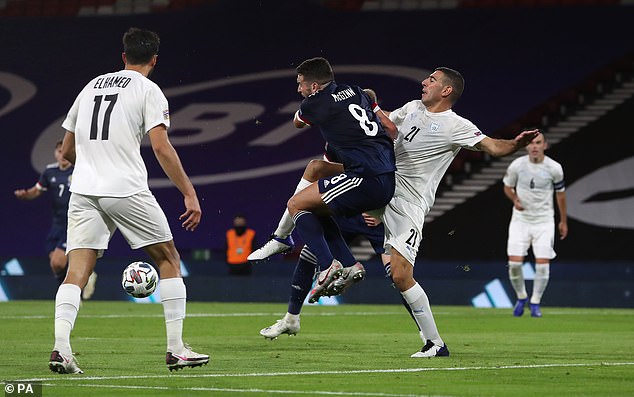 The menacing figure of Munas Dabbur threw himself at a header to sting the palm of Marshall’s hands, midfielder Dor Peretz hitting Dabbur rather than the back of the net with a second opportunity.

Within a minute Scotland were ahead thanks to a slightly dubious penalty. The home side had a genuine grievance when Slovenian referee Slavko Vincicdenied John McGinn a spot kick when he was bundled over by defender Eytan Tibi after 28 minutes.

The same two players were involved again when McGinn went for a loose ball in the area and got there a split second before Israel’s number 21.

Celtic’s Ryan Christie placed the ball on the spot and swept it high into the corner past Hibernian keeper Ofir Marciano to give the home side a half-time lead which looked unlikely for much of the first half. 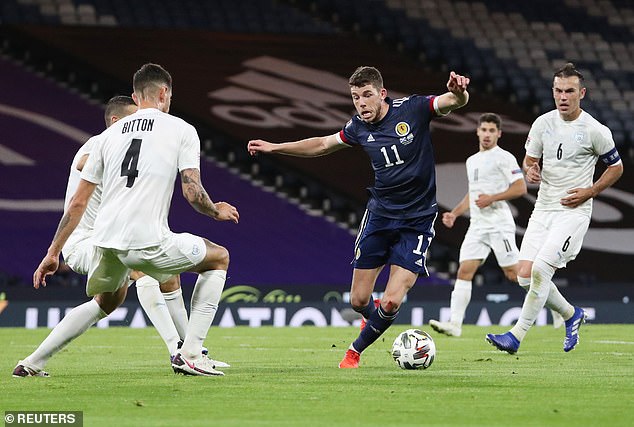 Ten months since Scotland’s last game brought a 3-1 win over Kazakhstan, Clarke picked a flexible squad of players and sought to mould a team.

Every Scotland game is preceeded these days by the same debate. In Andrew Robertson and Kieran Tierney Clarke has two quality left-backs. In a squad hardly overburdened with quality the manager shaped his starting eleven to accommodate both. The jury can – and will – argue over it’s effectiveness.

Missing from the last 13 squads Tierney’s first game under the current manager came on the left side of a three man defence, the role he fills for Arsenal. Less familiar was the sight of McTominay of Manchester United taking up a berth on the right side of the three on the other side of Aberdeen’s Scott McKenna.

Robertson played wide on the left in a 3-4-2-1 formation with new Queens Park Rangers striker Lyndon Dykes handed a Scotland debut in his first ever appearance at Hampden. 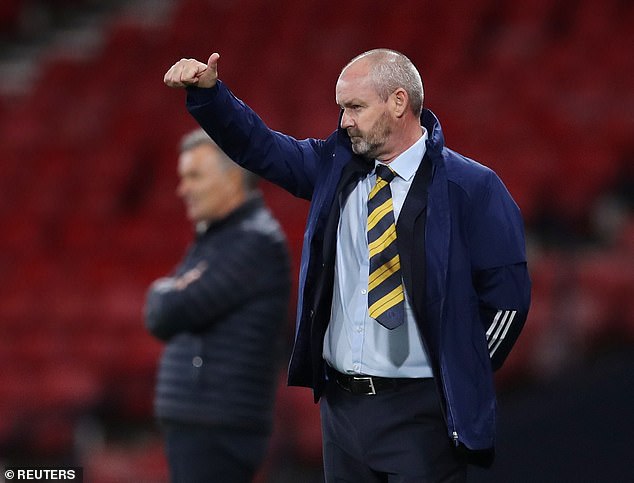 The plan was to get the best footballers in the team by hook or by crook. At times – most notably when McTominay misjudged the flight of the Dabbur header – it came dangerously close to square pegs in round holes.

Isolated in the early stages the first promising contribution from Dykes led to Scotland’s first penalty shout. A fine piece of play in the centre circle sent Ryan Christie clear on the clear on the left, ending with Dykes absorbing a shocking challenge from Peretz.

Rightly, the referee Slavko Vincic showed Peretz a yellow card. Wrongly, he gave a free kick to the visitors rather than a spot kick when McGinn gathered Christie’s low cross and was bundled over in the area by Tawatha. Penalties have been given for less and, before half-time, one would be.

It took 35 minutes for either side to manage a shot on target, a thumping Peretz shot from 20 yards comfortably gathered by Marshall. Yet Israel’s new coach Willi Ruttensteiner looked to be heading for a satisfactory first 45 minutes in charge until Tibi was just a fraction late with the challenge on McGinn.

For Scotland the second half started better. The home team had to spend more time in the Israeli half. The hold up play of Dykes was key to making it work.

The former Livingston striker started the second 45 well and did more than enough to suggest he has a real future at this level by showing a deft touch to hold the ball up and give Ryan Christie the time to lend support. At other times Dyke attracted challenges to win timely free-kicks.

A goal behind Israel couldn’t stay passive forever. The visitors passed up a wonderful opportunity after 70 minutes, another peach of a cross from Eli Dasa inviting a touch which never came.

Oli Burke was warming up to replace a tiring Dykes when the equaliser arrived 18 minutes from time.

The home team switched off from an Israel throw-in, the Guangzhou attacker playing a delightful one-two with Dabbur before bursting through the back line to lash the ball high into the net for 1-1.