Rangers and Celtic’s joy and misery was contrasted and analysed on this week’s Scottish Football Podcast with Andy Walker, Ian Crocker and Kris Boyd.

As Rangers extended their lead at the top of the Scottish Premiership, their clean sheet tally and their unbeaten start to the season with a 4-0 thumping of Ross County, Celtic again dropped points with a laboured 1-1 home draw against St Johnstone, to fall 13 points off the top of the table with two games in hand.

Aside from their run of 14 wins from their opening 16 league games, Steven Gerrard’s side have conceded only three goals in that run to date.

That, alongside veteran Steven Davis’ move for Rangers’ second goal in their weekend thumping caught the eye of former forward and Sky Sports pundit Kris Boyd, who told the Scottish Football Podcast the differences between the two Premiership challengers’ styles of play had become apparent.

“Celtic for a number of seasons have relied on individuals to go and win games of football for them, Rangers relied on Alfredo Morelos to go and win them games,” he said. “But the goals, the opportunities, the types of attacks Rangers are having, has worked on the training field and you can see everybody’s bought into it.

“It’s a two-year work in progress and hopefully it’s now coming towards the end game of silverware for them, and it looks as if everybody’s bought into it. It looks like a team that’s organised, drilled daily, and I mean daily, on the training field.

Ryan Kent, Kemar Roofe as well at the weekend, the press starts right from the front, the defensive unit got a lot of the praise, but it’s Rangers as a team, moving all over the pitch, shutting gaps, not allowing James Tavernier to get one-vs-one on the right any more, it just looks as if even the defensive unit is well-drilled on the training field.

“Yes, when you’re winning games it’s easier to train but that period of rest from Covid over the summer for Rangers, it looks as if they’ve really bought into this season. They’ve got better players to carry it out, and are reaping the benefit of it.” 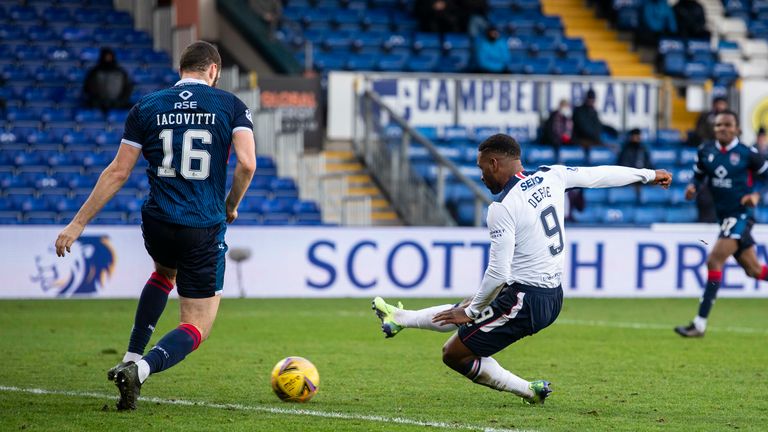 Jermain Defoe was among the scorers for Rangers in their win at Ross County as the 38-year-old netted his second league goal of the season and fourth in all competitions.

Sky Sports’ Andy Walker, who himself retired from playing at the age of 35, told the podcast the ex-England striker could still make a difference to Rangers’ title challenge despite his advancing years.

He said: “The idea of playing to his age, 38, I played in his position and at 33-34, I knew I was winding down. I’m glad to have got to 35, but I knew then I couldn’t do any more, for him to be so fit, so sharp, his touches are delightful, he still knows where the goal is.

“I wouldn’t be surprised if he comes up with not only a decent number of goals, maybe a dozen or so, I bet there’ll be one weekend where he gets a really important one. I think that’s the mark of a top-class player.”

Gardyne incident ‘does not help one single bit’

Rangers defender Connor Goldson accused Ross County’s Michael Gardyne of using a homophobic slur during Sunday’s victory at Victoria Park, with the home player booked over the incident but his club still waiting to receive a notice of complaint from the Scottish Football Association.

Gerrard said what his players heard “should not be heard on a football pitch” after the game, and Boyd told the podcast such incidents did nothing to aid the cause of creating a more inclusive environment for gay players to come out.

He said: “We always speak about the campaigns to try to create a safe environment for players to come out as being gay if that is the case, and incidences like this do not help one single bit.

“There will be gay players out there, no doubt about it, but they’ll be scared to come forward. It’s something we need to be careful, and have a look at ourselves, especially on the pitch. When there’s no crowd there, people can hear what you’re saying.”

Liverpool exposed by revitalised Chelsea with jaded Reds out of energy