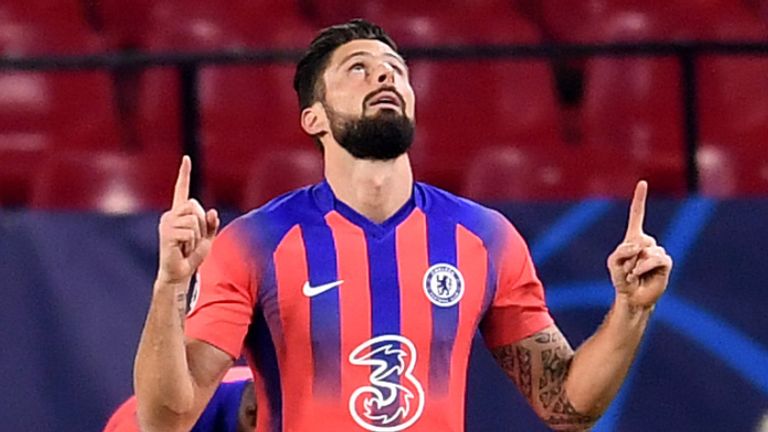 Olivier Giroud gave Frank Lampard a reminder of his qualities with four goals – including a perfect hat-trick – that helped Chelsea confirm top spot in Group E with a 4-0 win at Sevilla.

Sevilla, who had only lost once to an English side at the Ramon Sanchez-Pizjuan Stadium, fell behind inside eight minutes to a much-changed Chelsea as Kai Havertz was allowed to run 40 yards from his own half before teeing up Giroud, who beat debutant goalkeeper Alfonso Pastor with a curling finish into the top corner.

Giroud made it two nine minutes into the second half, feinting to shoot with his first touch and expertly dispatching his second goal with his next.

The hosts had made eight changes and rarely threatened Edouard Mendy’s goal, instead falling further behind with 16 minutes to go when N’Golo Kante’s excellent cross was nodded into the far corner by Giroud for a perfect hat-trick.

The Frenchman, who became the first Chelsea player to score four in one game since his manager in 2010, then scored a penalty with his final touch of the game, as Chelsea secured top spot in their Champions League group in style.

Man of the match: Olivier Giroud

It would have been easy for two sides making 17 changes combined from their weekend league games to look disjointed but the game served up at an empty Ramon Sanchez-Pizjuan Stadium proved nothing of the sort, with Chelsea racing into an early lead in a high-tempo start.

Havertz, making his first start in over a month, picked up the ball in his own half before racing away from the Sevilla midfield and feeding Giroud on the edge of the box. The Frenchman, who has played only 47 minutes of Premier League football this season, turned onto his left and beat Pastor.

Sevilla felt they could have levelled 20 minutes in when Karim Rekik got up to meet Oscar Rodriguez’s free-kick before Rudiger made an important block.

Rudiger shone at the other end of the pitch before half-time, too, with his bullet header from Emerson’s corner cleared off the line by Vazquez. 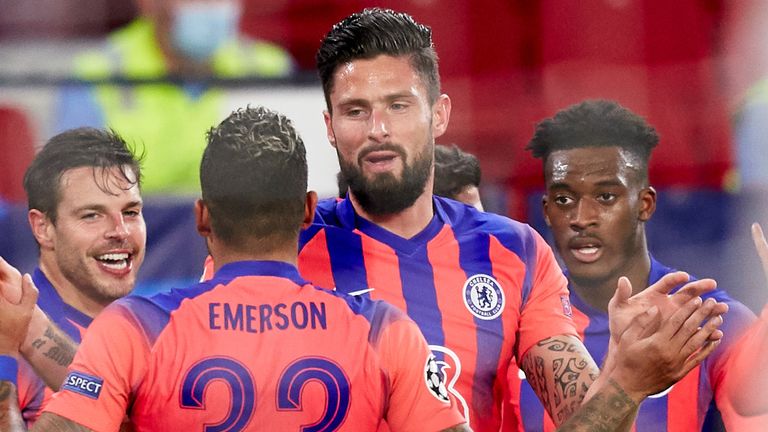 Giroud further staked his claim for a starting spot in Chelsea’s league game with Leeds this weekend on Sky Sports as he doubled his tally nine minutes into the second period. He ended a flowing move by taking Mateo Kovacic’s pass in his stride, leaving Sergi Gomez on his backside with his first touch and beating Pastor with his second.

Sevilla threatened a little more after making a triple substitution to re-introduce some of their big hitters, but still never threatened Mendy, while Giroud sealed his hat-trick with help from one of Chelsea’s additions from the bench.

Kante, on the right of midfield, looked up before spotting the forward’s run to the near post and picking him out with a perfect cross which was glanced into the far corner.

Giroud again got the better of Gomez, who would ask for the forward’s shirt after the game, with six minutes to go as he was hauled down in the box from another cross, before steadying himself to beat Pastor from 12 yards.

That proved his final touch as Lampard brought off his veteran striker with a near-perfect Champions League night for the Chelsea manager bettered still by the late introduction of Billy Gilmour from the bench, nearly five months since his last first-team appearance due to a long-term knee injury.

Man of the match – Olivier Giroud

If Giroud doesn’t start against Leeds on Saturday, you’d forgive him knocking down Frank Lampard’s door asking him what more he can possibly do to impress.

Because his performance against Sevilla was about as perfect as it could have been. A first Chelsea four-goal haul in a decade, and all from only five shots across the night.

He took part in more aerial duels than anyone on the pitch and while he may have only won half of them, it was the Frenchman’s often underrated feet which did the talking for the most-part to totally outclass a Sevilla backline who never got to grips with him.

Chelsea are live on Sky Sports Premier League from 7.45pm on Saturday night when they host Leeds at Stamford Bridge; kick-off at 8pm.