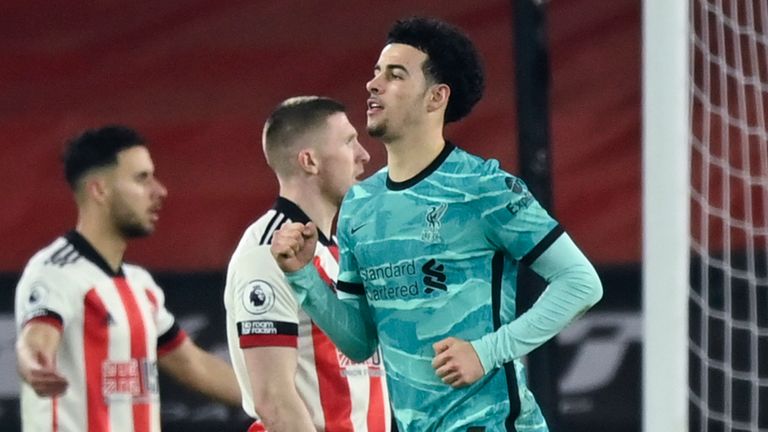 Liverpool ended a run of four successive Premier League losses with a 2-0 win at bottom club Sheffield United, boosting their hopes of finishing in the top four.

Four of the five teams above Liverpool had failed to win this weekend, handing Jurgen Klopp’s side a perfect opportunity to make up ground against the Premier League’s basement club.

It looked like it could be a frustrating evening for Liverpool as Aaron Ramsdale made a string of superb saves in the first half. Ozan Kabak – paired with Nat Phillips for Liverpool’s 14th different centre-back partnership in the league this season – had the ball in his own net, but Oli McBurnie was penalised for offside in the build-up.

But it took under three minutes for Liverpool to take the lead after the break as Curtis Jones powered his shot home, although it was subject to a VAR check to see if the ball had gone out of play beforehand. Roberto Firmino’s shot was then deflected home by Kean Bryan (64), with the Blades defender eventually credited with the own goal.

Liverpool are now two points behind West Ham in fourth, keeping their hopes of finishing in the Champions League places alive. Sheffield United remain rooted to the bottom of the table after their fourth league defeat in a row and are now 15 points from safety.

Sheffield United’s match against Liverpool is the first of three successive home Premier League. They are back in action on Wednesday against Aston Villa; kick-off 6pm. The Blades will then welcome Southampton on Saturday, live on Sky Sports; kick-off 3pm.

Liverpool also play twice on Sky Sports over the next week. Firstly, they welcome Chelsea to Anfield on Thursday; kick-off 8.15pm. They will then play Fulham next Sunday; kick-off 2pm.