Sheffield Wednesday moved out of the Championship relegation zone for the first time this season with a 1-0 win over fellow strugglers Derby at Hillsborough.

Wayne Rooney’s Rams put in a dominant first-half display and could have edged ahead with a host of chances, most notably when Colin Kazim-Richards’ header hit the crossbar.

It looked as though the second half would follow a similar theme but Wednesday recorded a third win in three games – and second in a row under caretaker manager Neil Thompson – when Callum Paterson bundled in from close range (61).

Victory moves the Owls above Derby and up to 20th, with Rooney’s side now in 21st. Nottingham Forest drop into bottom three as a result, ahead of their trip to Preston on Saturday.

A turning point for Sheffield Wednesday?

It was exactly a year since Rooney’s arrival at Derby and, on the back of a crushing 4-0 win over Birmingham last time out, there were undoubtedly ambitions to mark the occasion with a valuable win. 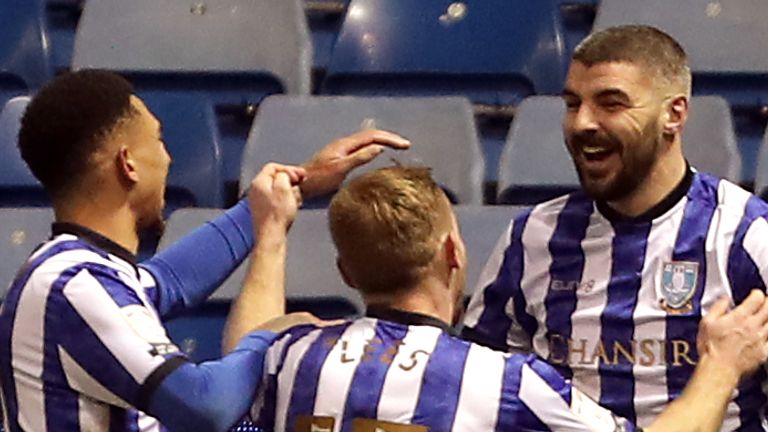 Around the 15-minute mark, the Rams started to display their intentions. Joe Wildsmith beat away Louie Sibley’s long-range shot before Graeme Shinnie’s follow-up was flicked over the bar. Adam Reach lifted a shot into the stand with one of Wednesday’s rare openings.

Derby probably should have taken the lead their enterprise warranted just before the half-hour, when Kazim-Richards stooped to meet Craig Forsyth’s inviting cross from the left flank and powered a header onto the crossbar with Wildsmith beaten.

An injury to Josh Windass forced Wednesday caretaker Neil Thompson to introduce Elias Kachunga and the former Huddersfield forward almost gave the hosts the lead against the run of play when he leapt to glance Barry Bannan’s free-kick wide of the left-hand upright.

Forsyth sent a low cross skidding across the six-yard box that evaded several team-mates shortly after the break but just after the hour mark, the hosts took the lead against the run of play when Paterson bundled the ball over the line after Derby failed to clear Bannan’s free-kick.

Derby continued to attack with little reward and were denied a penalty in second half stoppage time, when Lee Buchanan’s shot appeared to strike Kadeem Harris’ hand, dealing them just their second defeat since November 25.

Man of the match – Liam Shaw

It was a collective effort from Sheffield Wednesday but he slotted in well at centre-back. It wasn’t an easy night, dealing with Colin Kazim-Richards, but he stood up and dealt with it very well.

Sheffield Wednesday caretaker manager Neil Thompson: “First half we weren’t at the races and rode our luck a bit, let’s be honest. It looked as if the games had caught up with one or two but I had a little word at half time and we were a lot better second half.

“I’ve got to say, the lads gave everything they’ve got. We dug it out, Pato got his goal and it was great. I’m delighted.”

Derby interim manager Wayne Rooney: “We were in total control, created some very good chances, didn’t take them and then we almost found the game too easy. I thought we got bored of doing the right things and it’s cost us.

“When you are on top and creating chances, you need to take them. I felt we started getting drawn into a game that Sheffield Wednesday wanted. It’s something we need to learn from. We need to enjoy doing the right things.”

Both clubs will participate in the FA Cup third round on Saturday, January 9. Derby travel to Lancashire to face National League North side Chorley at 12.15pm, while Sheffield Wednesday face Exeter at St James Park at 3pm.