Melbourne Victory's clash with Brisbane Roar, scheduled for Sunday, has become the latest A-League victim of the coronavirus crisis, postponed because of the three-day lockdown in Brisbane as a result of an increase in COVID-19 cases in Queensland.

No date has been set for the fixture to take place but Victory is hopeful that it might be staged next Friday, January 15. 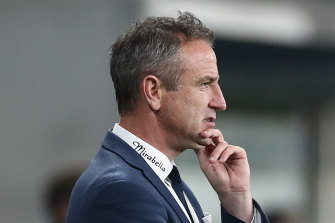 The COVID-related delay to the A-League fixture could give Grant Brebner’s team time to catch-up on match fitness after a busy summer. Credit:Cameron Spencer

"It's an opportunity where we can make the best of the situation. From a footballing perspective, we get an opportunity now to bring players closer to match fitness, with that extended break, and, who knows, it might even work in our favour."

In addition, Marco Rojas, who injured a hamstring in the first game of the season against Roar – a 3-1 home defeat last Saturday – will gain more time to recover. Rojas was back on the grass at a Victory training session on Friday when he was running as the first phase of his recovery program.

"We would have had a lighter session, but we managed to get a little more mileage into the players. I think collectively we needed it, and we have some individual players who need to catch up. We will be able to do another physical session tomorrow," Brebner said after training on Friday.

"We will look to open up the pitch and have a little bit of an internal game. While it's not A-League competitive, it will be an internal game where we can have another 90 minutes."