SIR CLIVE WOODWARD: Are we practicing correctly? Could there be a Premier League penalty competition? How I would make Gareth Southgate’s Three Lions spot-kick champions

It’s difficult to imagine any team winning the World Cup or European Championship without a penalty shootout at some stage, so England have to think differently about spot-kicks and start narrowing the odds in their favour.

I’m in awe of those who did their best on Sunday and my heart goes out to the three Lions who missed. It’s not their fault, it’s the system and our approach.

England must put more time and science into shootouts because we came up short again. It had nothing to do with youth and everything to do with not preparing everyone to handle the occasion. 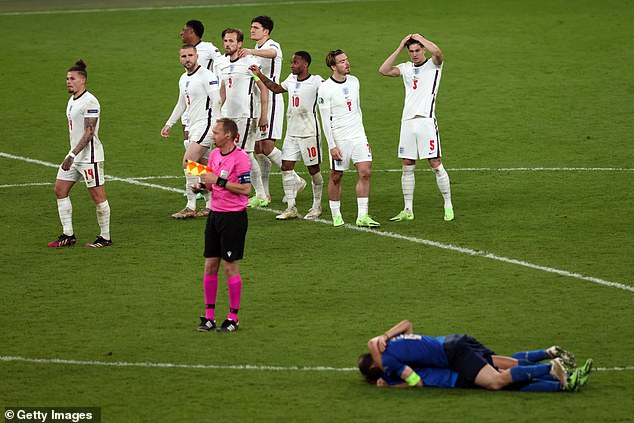 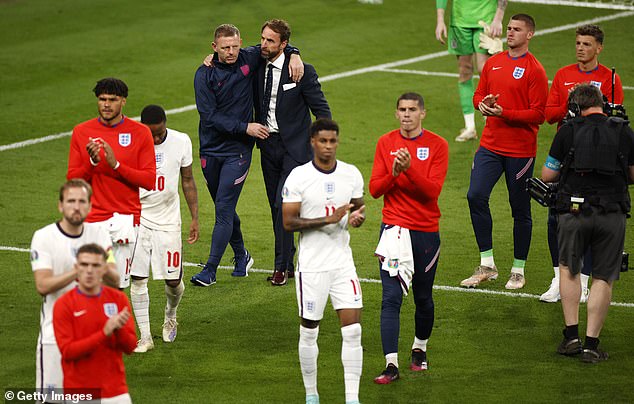 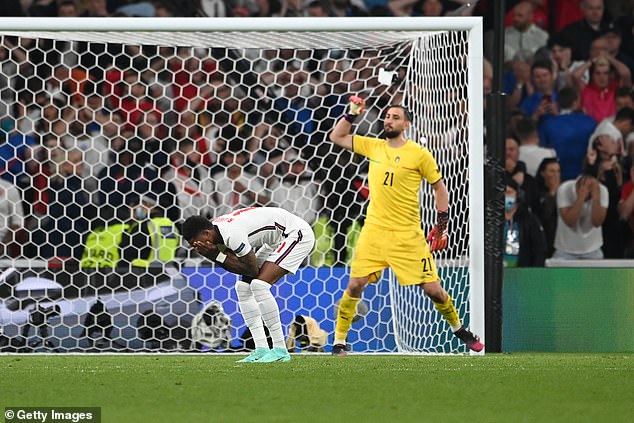 You can’t guarantee success but shootouts are not the lottery many pundits would have us believe. The opposition are in the same boat and consistently do better than us. The team with the best penalty takers and best penalty stopper wins.

England need to be more practical, scientific and inventive. Here are some suggestions on an issue I’ve been fascinated with since I got my UEFA coaching qualification and spent a year at Southampton.

ARE WE PRACTISING CORRECTLY?

A penalty is a basic repeatable skill, like a golfer’s putting stroke or a rugby goal-kicker. It shouldn’t be random or reliant on how you feel on the night. It should be exactly the same penalty you have executed in practice 50 times that week and 200 times that month. A taker should have two penalties in his locker to keep the opposition guessing, ideally one left and one right.

When I was at Southampton I asked Dave Alred, the best coach of how to kick any ball, to come and bend his mind to penalties with our academy players as guinea pigs.

Dave got two lengths of rope. He tied one on the crossbar a yard in from the left post and let it dangle to the turf. He tied the second a yard in from the right post. Between the post and the rope is the area you must hit every time, at a decent pace, to virtually ensure success.

With the crossbar eight feet high, that’s two areas of approximately 24 square feet. We asked these young professionals to do it three times with no keeper and they found it incredibly difficult. They didn’t have the consistency and technique.

England’s top goal-kickers in rugby over the decades — Dusty Hare or Jonny Wilkinson — picked out a bobble hat or a fan wearing a bright jacket in the crowd to aim for. For Jonny’s warm-up, he would practise kicking from the tryline with a single post — six inches wide — to aim for. And hit.

Dave was insistent the perfect penalty was not the ‘C’ shape swing of the foot which most do, which imparts spin and takes pace off the ball, but the ‘J’ shape kick when you come round the corner and follow through straight on. He thought Alan Shearer had the best ‘J’ shaped technique of anybody.

Matt Le Tissier at Southampton regularly stayed on for penalty practice after the other lads were in the showers. Matt, bizarrely, had the reputation of being laid-back but there were few players who practised their skills more.

He scored 47 out of 48 penalties in his career. There was nothing random about his penalties. The FA should employ him as their penalty coach. Practice should replicate the whole process: players line up on halfway, the walk to the spot, fussy referee telling you to reposition the ball, delay while the keeper adjusts his laces, that wait for the ref to blow his whistle. Detail, detail, detail.

Have England practised penalties under lights, shattered after a gruelling fitness session, in a stadium with the speakers blaring? And could they bring in other non-English goalkeepers to take away the feeling of familiarity in a squad? 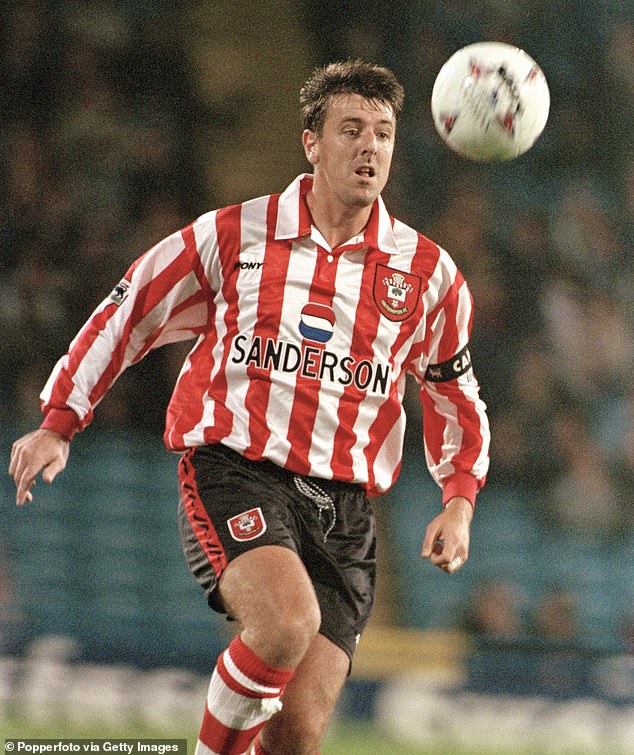 In the season before a tournament we should stage a penalty shootout after every Premier League match with the crowd encouraged to stay. Five penalties, all taken by English players. This is our league, we can make the rules.

Replicate the process exactly. Get it sponsored, make it a ‘thing’, collect data, find out who the best penalty takers in England are in front of barracking fans and present them with an award at the end of the season.

And who’s the best penalty-stopping keeper for England in that competition environment? It might be Jordan Pickford but if, statistically, there is a specialist, consider subbing that player on with a minute to go of extra time.

We need these shootouts at all international friendlies too. These games can be low key so up the ante. There would be huge value and interest in finishing games with shootouts regardless of the score. Let’s lead on this now. 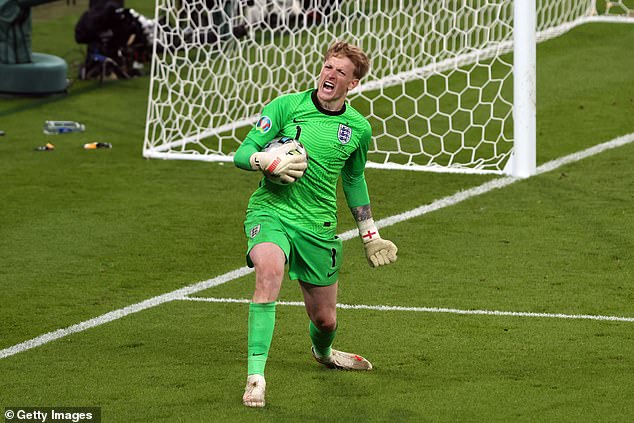 I’ve always been astonished that football doesn’t have American Football-style kicking nets on the touchline. On Sunday, I’d have liked to see subs getting in the groove using practice nets.

And after extra time, before penalties, surely the first five could have been doing the same. In the break between full-time and extra time in the 2003 Rugby World Cup final, Jonny picked up a tee and started practising kicking.

Penalties will continue to decide tournaments. They have become a core skill. We must change our mindset and look forward to them, knowing we’re better prepared than any other nation. 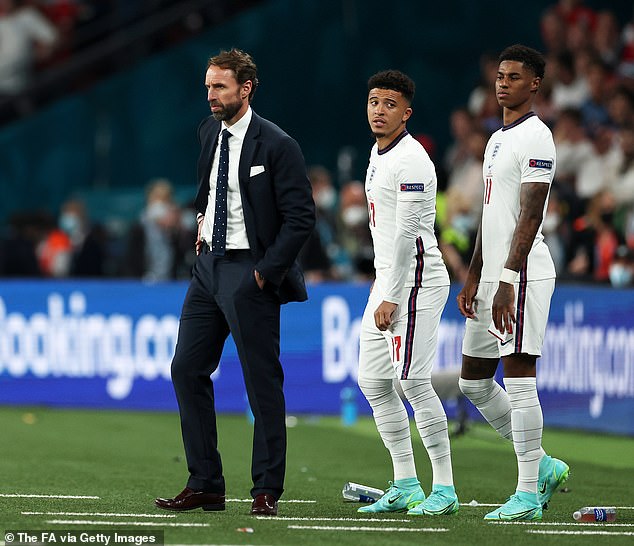 Jadon Sancho, Marcus Rashford and Bukayo Saka all missed from the spot in Sunday’s final