James McFadden has called on Scotland to play Billy Gilmour against England on Friday to get their Euro 2020 campaign back on track after their opening-game defeat to the Czech Republic.

Back at a major tournament for the first time in 23 years, Scotland’s return to the big stage didn’t go as planned, with Patrik Schick scoring a towering header before netting a remarkable second from near the halfway line.

The result leaves Steve Clarke’s side an uphill battle to qualify from Group D – but former Scotland international McFadden has called on his country’s manager to trust Chelsea youngster Gilmour for that key clash with England.

The 20-year-old was left on the bench for Monday’s Hampden Park loss but McFadden believes Gilmour has shown he has the quality and mentality to step into the highly-charged atmosphere of an England-Scotland game and deliver.

“The 30 minutes that Billy Gilmour produced against Luxembourg, I’d have had him in,” McFadden told the Sky Sports Football Euros Podcast.

“He brings something different. Although he’s young and inexperienced, you see him looking, talking. ‘Where’s the space? Not just for me but the next guy?’ I’d not be surprised if he played.

“His debut for Chelsea was against Liverpool, against Fabinho, a Champions League winner, Premier League winner and he was man of the match. He followed it up with a man-of-the-match performance against Everton.

“He has serious talent with an unbelievable temperament. If he was playing, he’d take it in his stride.

“Young players energise the players that are there. They inspire the players beside them, either to feel that kind of protection or to give you a lift and raise your game to different levels.

“[He has] no fear, no trepidation. I wouldn’t be surprised if he started.”

Regardless of which players are selected, McFadden says it is essential Scotland work together at Wembley to frustrate their hosts and not allow them any room for England players to run into.

The visitors will be going in as underdogs but there could be the opportunity to spring a surprise on the counter-attack, he says.

“The English public don’t rate Scotland at all,” he said. “But [the English players] will have a respect for certain players in our team. But in general, they won’t have any. They will expect to brush us aside. 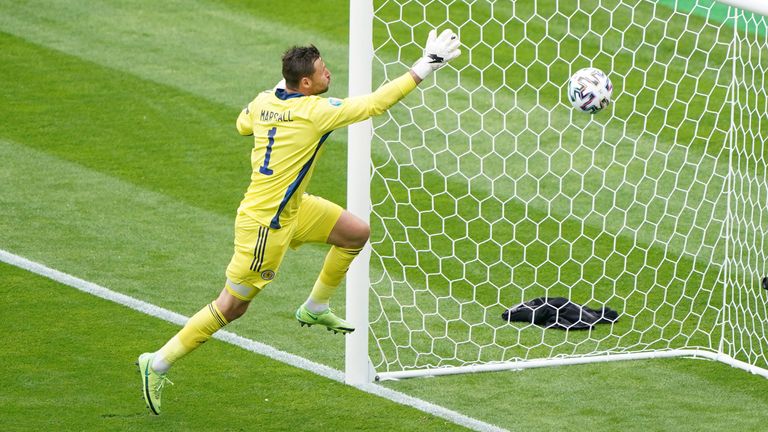 “It’s tough to find a weakness [in England]. If anything, I think the game plan, rather than trying to exploit a specific area, the game plan is to frustrate them, to sit in, absorb some pressure, hit them on the break, make them over-commit with bodies forward.

“You look at their threat, it’s Harry Kane dropping short and Raheem Sterling exploiting the space using his pace. But if we don’t leave any space they have to find another way.

“We have to be solid and compact and have England over-commit players forward so we can get at them defensively.”

Reflecting on the defeat to the Czech Republic, McFadden said a couple of defensive lapses and a missed opportunity from Lyndon Dykes proved costly in an otherwise tight game. “It comes down to, [firstly] we didn’t defend one particular cross very well. We didn’t stop the cross, we didn’t put enough pressure on Schick to stop him getting a head on it, a fantastic header from his point of view. And then we’re not set up properly when we’re on the attack, we don’t see the danger of the counter,” said McFadden.

“Jack Hendry strides forward and the decision to have the shot is the wrong one. OK. But you have to look at Grant Hanley’s position, Liam Cooper’s position, David Marshall’s position.

“They need to be thinking, ‘what happens if he loses the ball? Where is the danger?’ Not, ‘I wonder if he’s going to score, what’s he going to do next?’ The danger was in the guy who produced a moment of pure class.

“It’s difficult to speak about [Schick’s second goal] because if it was a game you weren’t involved in emotionally, you’d be talking about it for years to come.

“Then the chance [Dykes] has in the second half, he has got to score it. I will make the case for Dykes being in the team because his all-round game improves and enhances the team and you don’t necessarily judge him on goals.

“But when you’re a striker and you get a chance eight yards out you have to score. Those are the moments.”

What went wrong for Scotland – and what do they need to do to bounce back against England at Wembley?

After a 23-year wait, Scotland’s first match back at a major international tournament ended in defeat, with Steve Clarke’s side going down 2-0 to the Czech Republic at Hampden Park.

There’s debate and discussion about the chances which came and went for Scotland, the mistakes at the back, the impact of “world-class” Kieran Tierney’s injury – and whether Scotland can bounce back in the mouth-watering match-up with England at Wembley on Friday.

And finally… was Patrik Schick’s halfway-line strike better than Zinedine Zidane’s volley at the same stadium? Or McFadden’s goal in Paris?!