The name of Milan Skriniar needs little introduction, given his standing as an Inter Milan starting centre-back and a gossip column regular. But for those who don’t keep a regular eye on Serie A, an effective showing here for Slovakia’s shock 2-1 win over Poland served as evidence of his capabilities – in both penalty boxes, as it turned out.

A powerful and aggressive individual, his style is often uncompromising in terms of his defensive work, yet he possesses the composure on the ball to play out short or diagonal as required and move into the channel to support play in his club’s back-three system.

There were few such requests made of him here; Slovakia play a four, Skriniar left of the central duo, and he was very much tasked with clearing his lines, winning aerials and ensuring no spaces were left for raiding wide men to race in down the Poland right.

His reading of the game was exemplary, the fearless nature of his defensive work reliable and appreciated by the team as they repelled Poland’s second-half onslaught prior to the red card.

Skriniar has often been an imposing presence at the back for Inter; it’s what has seen him linked with the likes of Tottenham, Liverpool and Manchester United more than once.

But here, much to the surprise of many and the delight of his nation, he also proved improbably lethal at the other end: a fizzing, thunderous half-volley into the net with around 20 minutes to play, putting Slovakia 2-1 ahead.

For a defender who netted three this season, a goal off a set-piece shouldn’t be a particular shock, but this wasn’t an aerial assault – rather a fantastic strike that any No9 would be proud of.

Perhaps it’s an area he has worked on; he had just two international goals before this one and didn’t score at all for Inter Milan in 2019/20 or 18/19. The potential for regular celebrations at the other end certainly won’t lower teams’ interest in him – or his possible market value.

It remains, all the same, his defensive traits which make him so desirable.

In much the same way that being a trusted star for Diego Simeone carries with it a guarantee of work rate, stamina and reliability, or being a Pep Guardiola go-to signifies incredible technique and comfort in possession, being a lieutenant of a successful Antonio Conte side has meaning.

Skriniar rarely errs on the ball, follows tactical instructions to a tee in and out of possession, covers the channels exceptionally well and is a strong and consistent performer.

Two or three instances during this match highlighted those traits: one notable one was a covering run behind his left-back to intercept a dribble and win a free-kick, late in the second half as Poland pushed for an equaliser. Another saw him clear a succession of set-pieces and deliveries early on in that second period, with the designated home side on top at that point.

His ability to be in the right place at the right time with such consistency was highlighted by him not just finishing the game with the most clearances, but doing so by a mile: 10 for him, four for the next highest player, Lubomir Satka. 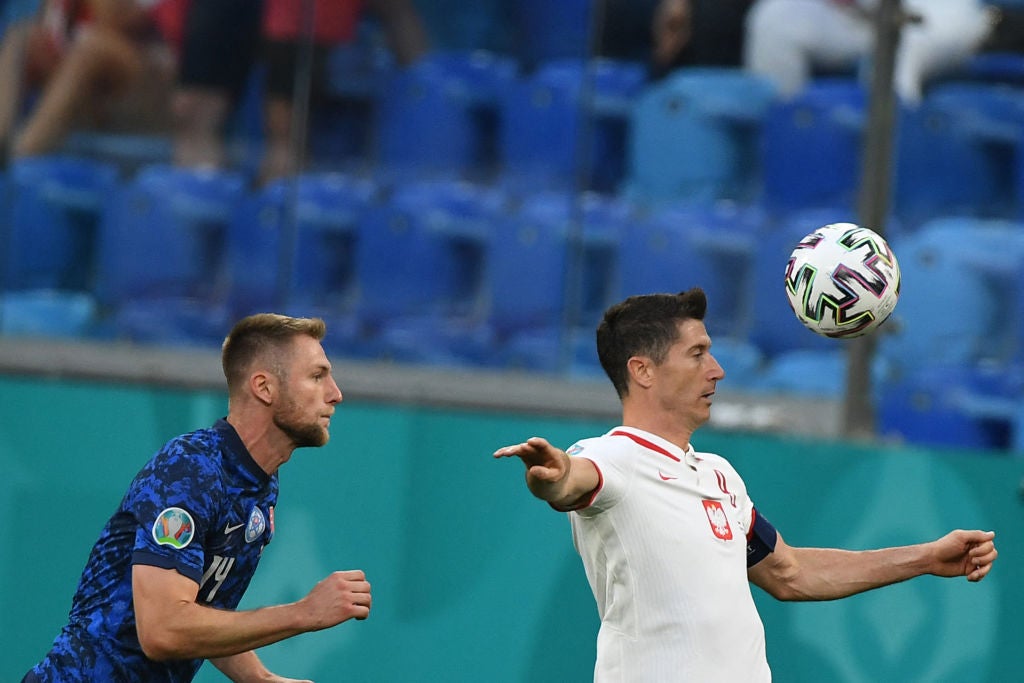 There were a couple of attempted blocks to thwart Robert Lewandowski and co, showing Skriniar stepping up quickly to avert danger, and most frequently of all, his accurate, reliable passing out of the back.

The No14 barely wasted a ball, including those which were more progressive in distance or intent, and he – like the rest of the Slovakia team – worked tirelessly to ensure no easy route to goal for Poland.

Slovakia have reached one World Cup finals and one European Championships finals in their relatively short history as a single, independent nation – both times they earned passage through the group stage into the last 16. With this victory and three points, earned by Skriniar’s blockbuster finish, his team have one foot in the knockouts once again. There remains work to be done, but with Skriniar at the heart of their attempts, there’s every reason to be confident about completing the job.