Socceroos star Tom Rogic was among the scorers as Ange Postecoglou picked up his first league victory at Celtic in style with a six-goal hammering of Dundee.

A hat-trick from Japanese forward Kyogo Furuhashi led the Scottish giants to a 6-0 victory in front of 24,500 fans at Celtic Park on Sunday (Monday AEST). 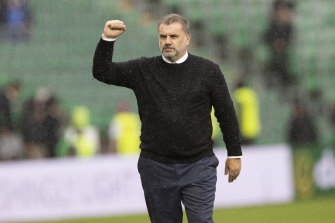 Rogic, 28, hit Celtic’s third goal against Dundee, who finished the game with 10 men after a late red card for Jordan Marshall. His foul on Liel Abada in the 89th minute led to a penalty, which Odsonne Edouard tucked away to cap the emphatic victory.

After a rocky start to life in Scotland, Postecoglou has now racked up back-to-back victories. Celtic were knocked out of the Champions League at the qualifying stages and lost their first Scottish Premiership game, but bounced back to claim a 4-2 win in the Europa League third qualifying round against Czech club Jablonec on Thursday.