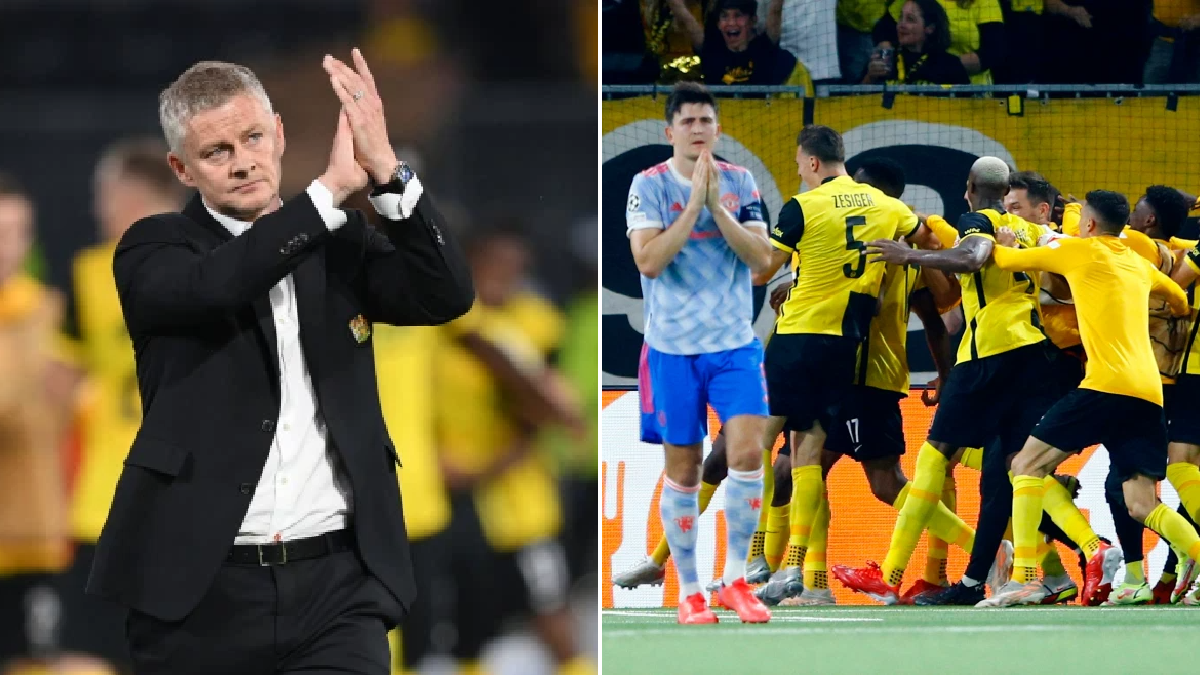 Ole Gunnar Solskjaer has defended his decision to switch to a back five in Tuesday’s shock Champions League defeat to Young Boys and insists his side were seconds away from gaining a ‘good point’.

The Red Devils took the lead in Bern through Cristiano Ronaldo but the game flipped on its head when Aaron Wan-Bissaka was shown a straight red card shortly before half-time.

Jadon Sancho was immediately replaced by Diogo Dalot and then Solskjaer opted to switch to a back five during the interval, bringing on Raphael Varane in place of Donny van de Beek.

But that left United devoid of attacking options – even more so when Bruno Fernandes was replaced by Nemanja Matic in the 72nd minute – and they were under siege for the majority of the second half.

Young Boys had 19 shots in the match compared to just two for United and applied constant pressure, equalising through Moumi Ngamaleu just after the hour-mark before Jordan Siebatcheu capitalised on a mistake from Jesse Lingard to net a 95th-minute winner.

United offered zero threat in the second period and struggled to get out of their own half for large spells, though Solskjaer was adamant his decision to set up so defensively following the red card would have been vindicated but for the unfortunate late goal.

Asked about the tactical switch at half-time, he told MUTV: ‘We saw the signs towards the end of the first half that they were going to switch it, get crosses in, so we wanted wing-backs and I thought we coped with it well.

‘Then we’re a bit lazy going out blocking the cross on the first goal and a bit unlucky because it gets deflected on Luke [Shaw]. And of course the last goal, that’s unfortunate. That’s just something that’ll happen.’

He continued: ‘It looked like being a well-earned point, and a good point, in a difficult game.

‘When you get the first goal you hope and you think that you’re going to create enough chances to win the game but unfortunately that sending off will always have an impact on the game.’

In his post-match press conference, the Norwegian echoed those thoughts, saying: ‘Second half we felt in control without the ball. They didn’t create any big chances at all. A few shots, David [de Gea] had one save to make – it probably hits the crossbar or goes over. Then the two unfortunate goals. So I was very pleased. It could have been a very well-earned point.

‘The signs were there last five minutes of the second half that they were going to get crosses in the box, we knew they were going to put the big, tall striker on. We had to deal with their switches a lot better and I thought Victor, Rapha and Harry coped with it well. Deflected goal the first one, but apart from that it was the best way of controlling them.’

On the subject of the sending off, Solskjaer added: ‘That’s a little bit the astroturf. Aaron gets a touch too far and he gets the ball but he follows through. It’s hard to argue against the referee but then again he didn’t go through his ankle, he hit him on the top of his foot. It was never a malicious tackle.’

What channel is Arsenal vs Aston Villa on? Premier League TV coverage and live stream