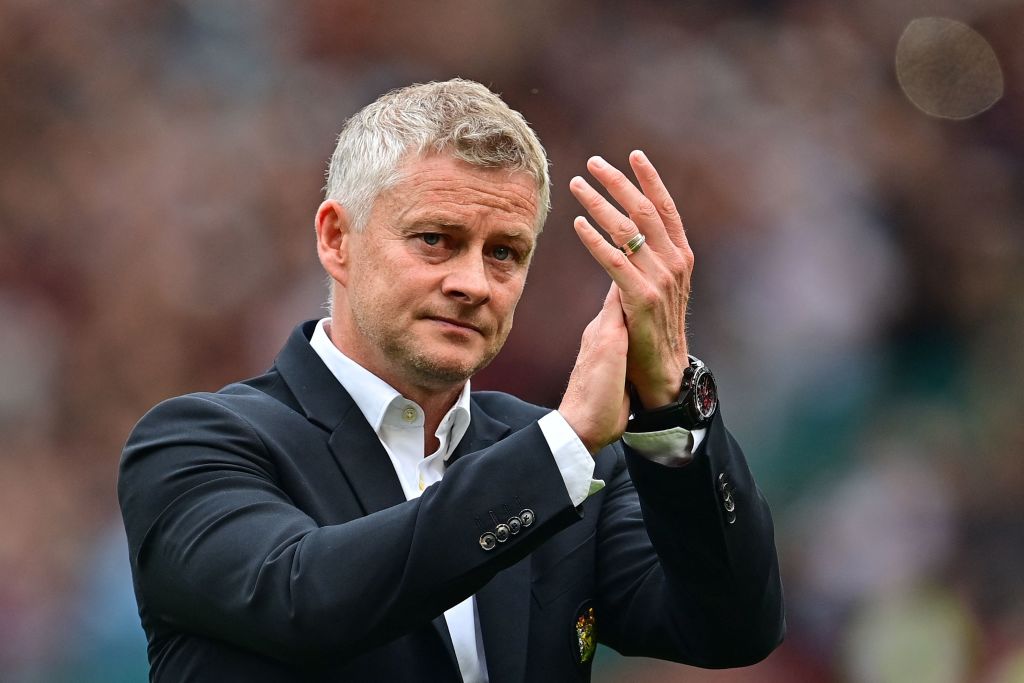 Ex-Manchester United captain Gary Neville claims a notable style and identity is ‘not there’ at his his former club.

The Red Devils were held by Everton on Saturday, leaving Ole Gunnar Solskjaer’s side with 14 points from their first seven matches.

While that tally is respectable and leaves United two points from the top of the table, they were handed a favourable start and their rivals have all played one another.

The pressure is therefore mounting on Solskjaer, particularly as the Norwegian was backed in the summer with the signings of Cristiano Ronaldo, Raphael Varane and Jadon Sancho.

It’s Solskjaer’s third full season in charge at Old Trafford and Neville is concerned that the side are playing without a recognised style of play, something he says must change quickly.

‘I was sat at home watching the Champions League during the week and ordinarily when Manchester United score a last-minute winner I raise a glass of wine and try and do something a bit tricky on Instagram or social media to wind the masses up,’ Neville told SkySports.

‘I couldn’t do it. On Wednesday night when that goal went in, I thought that was a really poor performance that. That’s going to catch you out. My immediate thought was Everton will do you on Saturday. That was my thought after Villarreal and that’s why I didn’t tweet something. Villarreal are a good team, don’t get me wrong, but the ability to counter-attack so many times, create so many chances, that cannot happen.

‘I’ve been in that home dressing room at Old Trafford and been on the pitch a lot over a 15-20 year period and there were periods when teams would counter-attack against us. In those seasons you don’t win the league. I’m telling you why, if you can’t sustain attacks at Old Trafford and you let teams penetrate back through you on the counter-attack, you ain’t winning that league. The players won’t say this but I can tell you exactly what they’re thinking.

‘Having to run back to your own goal at Old Trafford and it’s end-to-end is not the way you go about winning a league trophy. You’re going to get caught out. I thought Everton would do them on the counter-attack, I thought Rafa Benetiz would know exactly what to do. I thought they would win that game.

‘I watched the game yesterday and it didn’t surprise me, it surprised me that Everton didn’t win because you have to stop counter-attacks and sustain attacks and keep the team penned in. Pep Guaridola over the years, people will talk about his football and his points, but he sustains attack, as does Jurgen Klopp’s teams. They push up the pitch and don’t let their opponents get out. Manchester United don’t do that, they let teams counter-attack them all the time.

‘Why is that? Maybe thye’ve got too many attacking players on the pitch, maybe those attacking players aren’t alert enough or smart enough to spot the danger in the game. Something has got to change and I think Ole is going to have to pick a team that plays in the league. When I’ve seen Jose Mourinho or Sir Alex Ferguson trying to form teams, they keep a settle XI as much as possible and let that team build. Ole at the moment is rotating like Sir Alex used to because he’s got access to so many players.

‘He’s picking a new team every game and that has to stop now. I hope the international break is a time for Ole amd his coaches to reflect. He has to pick a way of playing, select a team and let that team build an identity, a style, because that’s the only thing I can suggest right now. The style and identity isn’t there.’