Stats show Tottenham star Son Heung-min has been outperforming Lionel Messi and Cristiano Ronaldo as Europe’s most clinical finisher since 2016… so, what are the secrets to his goalscoring success?

Forget Cristiano Ronaldo, Lionel Messi and Robert Lewandowski. Tottenham’s Son Heung-min has delivered a statistical anomaly that sets him out as bar far the deadliest finisher in Europe.

The way Son is performing in comparison to his expected goals (xG) is simply remarkable and eclipses all of football’s top marksmen since 2016.

Perceived wisdom is that eventually, players and teams performing above or below their xG will eventually turn the tide and the score will be about average, regressing to the mean. 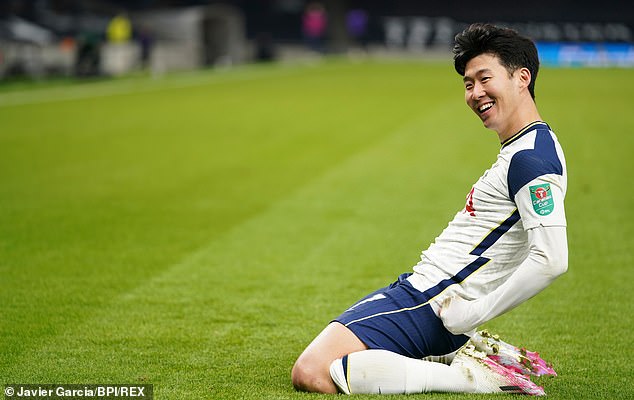 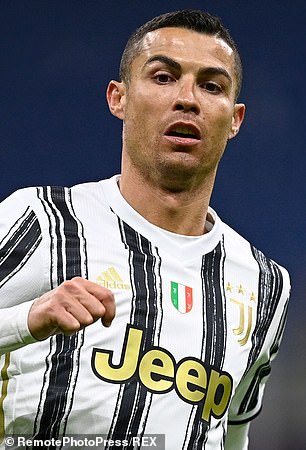 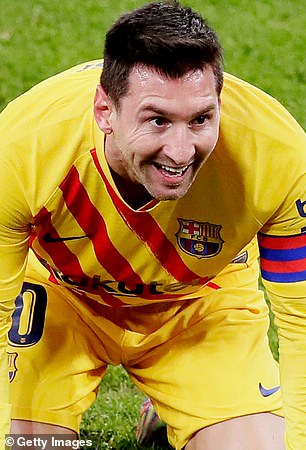 WHAT DOES EXPECTED GOALS (xG) MEAN?

Expected goals ranks the quality of each chance in comparison with thousands of similar chances before it.

A number of different measures go into it, such as the location of the shot and quality of pass leading to it. These variables are then used to give a value between 1 (certain goal) and 0 (impossible chance).

Not Son. His consistent ability to score more times than the chances predict, according to the expected goals measure (see green box below), is actually on the rise.

The statistics below, as compiled by understat.com and reported in the Independent, show Son is scoring a jaw-dropping 44 per cent above his xG since August 2016, a period in which he’s netted 61 times.

Next on the list is team-mate Harry Kane, who is almost level with Lionel Messi at 21.3 per cent.

Some of the players regarded as the most incisive in front of goal have actually performed worse than their xG, putting Son’s measurement on another level.

Ronaldo is only narrowly above the mean but Lewandowski, Neymar, Pierre-Emerick Aubameyang and Sergio Aguero are in the negative column.

So the big question is, how is Son doing it? The almost gravitational pull to the norm has dragged back some of the world’s best talents, how is he immune to the same force? 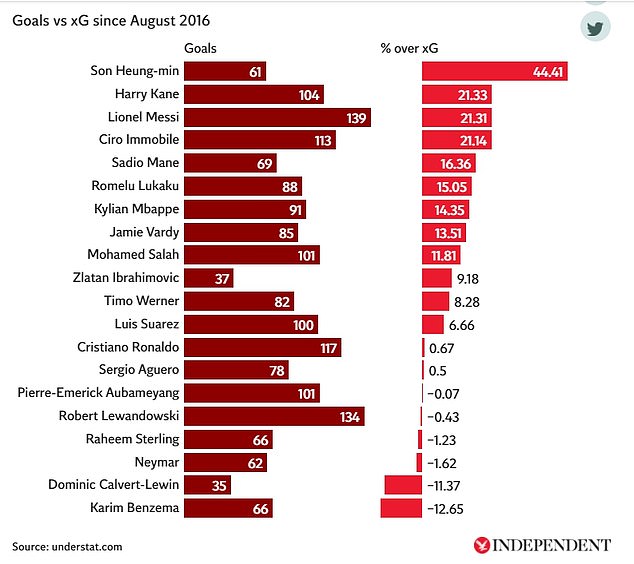 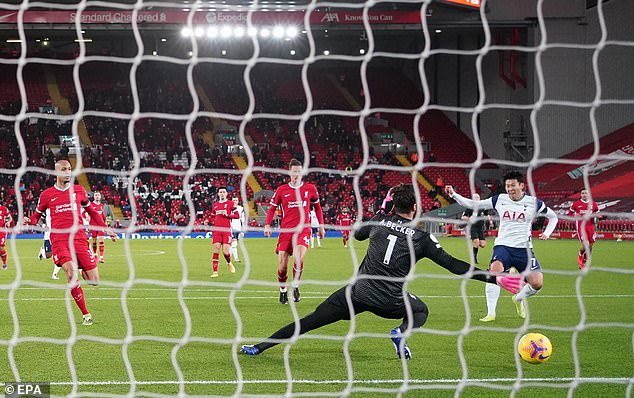 Son’s style of play may well have something to do with it. He loves to break from deep and charge forward on the counter attack, searching for those clear-cut chances afforded by a scattered defence.

A prime example of this was his goal in the 2-1 defeat against Liverpool at Anfield. Son was picked out with a defence-splitting pass and it just never felt as though he would miss, giving Alisson the eyes and burying it past his near post.

His four goals against Southampton earlier this season also typify the kind of goals Son has become known for.

The first was a tidy finish on the angle, not a straightforward opportunity but one he made look easy. For the second, he manufactured a one-on-one having sprinted away from the last defender, the hat-trick goal was yet another putting him clean through and Saints were caught out again for his fourth, allowing him to collect in acres of space, chest down and slot home. 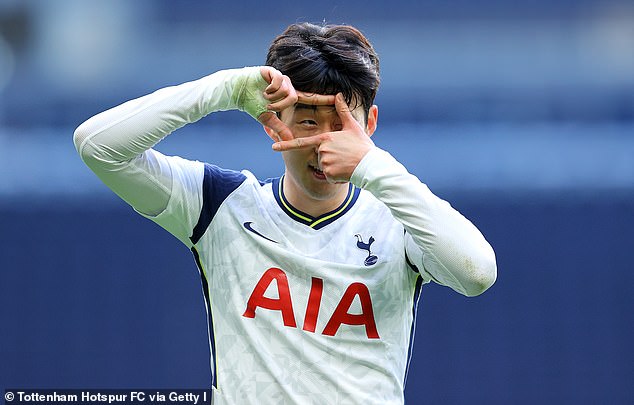 But it would be unfair to characterise Son’s finishes as streaky counter-attack goals.

His incredible run and finish from inside his half against Burnley won the 2020 Puskas award and the goal he scored this season in the north London derby, curling into the top right corner from way out, was breathtaking.

Of course, the way in which Mourinho sets up his team also suits the way Son likes to play.

Spurs are happy to sit deep and break with devastating speed and efficiency. Son is incredibly physically fit and possesses great pace so the chances are clearly going to fall his way.

But it isn’t just his own style that helps boost those xG numbers. His partnership with Kane is proving to be Tottenham’s greatest weapon.

A stat that underlines the importance of Kane to Son’s output, is that since August 2016, he has provided the South Korean flyer with 16 assists. That’s double the next player on the list, Dele Alli and Christian Eriksen, both tied on eight.

At times it seems they have an almost telepathic connection and Son is reaping the rewards with the England striker sitting slightly deeper and having more license to create.

Kane is unlikely to be the one making lung-busting sprints forward but his vision and weight of pass this season have provided ample opportunity for Son.

The striker described it as ‘riding a wave’, saying: ‘I think we’ve had a great relationship over the years but this season it has just clicked a little bit more.

‘When someone is on good form you just try and find them with the ball and end up scoring goals. We’re riding that wave at the moment.’

But Son has scored 44 per cent more goals than has been expected over five seasons, the relationship with Kane cannot simply explain away the freakish stats.

The fact that Son is a duel threat, accomplished with both left and right foot, is a major weapon in his arsenal. Defenders cannot simply show him onto a weaker side and expect to be safe. 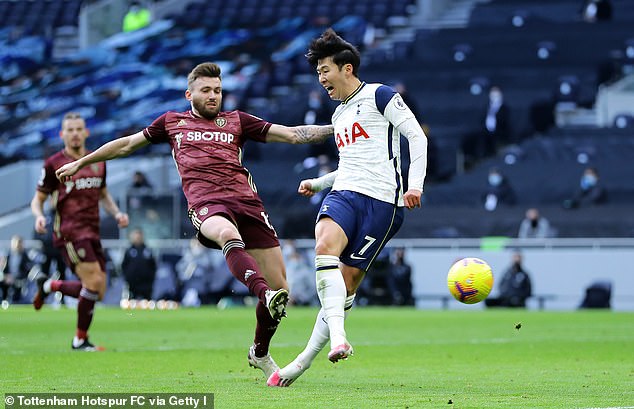 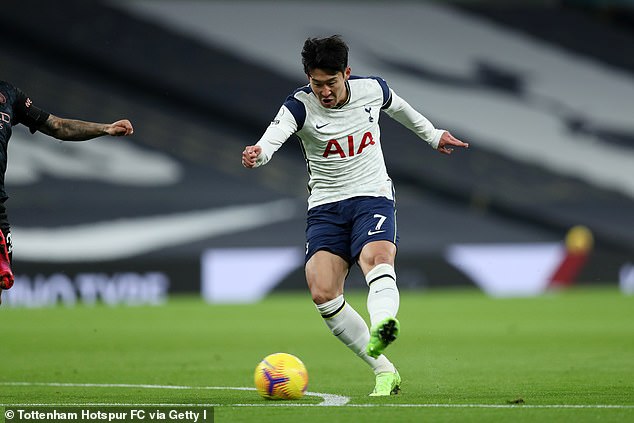 Most top level forwards are at least solid on their weaker side but Son is effectively ambidextrous.

These players are rare, which is part of the reason so many at Old Trafford are excited by Mason Greenwood as they cannot tell which is his weaker side.

And the numbers support this school of thought about Son.

Of the 61 goals, he has scored 34 times with his right foot and 23 with his left with only four of the total coming from headers.

The style of play again seems to be working towards efficiency. Headers are more unreliable and Son, despite standing at 6=ft tall, prefers to use his feet.

This season has seen Son deliver some of his best football in a Spurs shirt to date.

His chances have a total xG value of 5.39 but he’s already on 12 goals. The efficiency is even more startling when you take into account the other stats around his goalscoring. 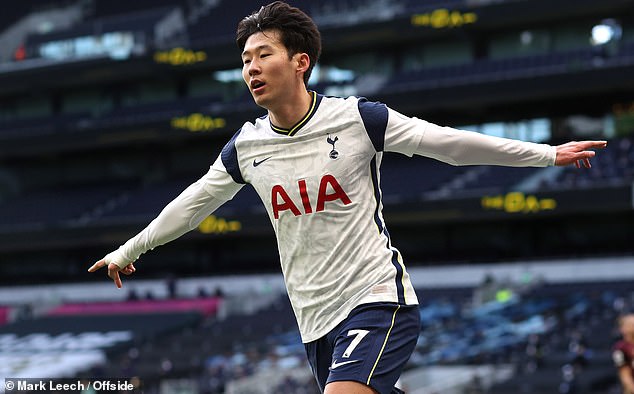 His shot accuracy is 81 per cent and conversion rate up at 57 per cent.

The message is clear for opposition defences, give Son a couple of shots in a game and his more likely than not to score one of them.

Taking a look at the breakdown of where Son has scored his goals also reveals why he is performing so far above xG over the last few years.

He’s not one to take pot shots from range unless he views it as a genuine chance with a clear opening. 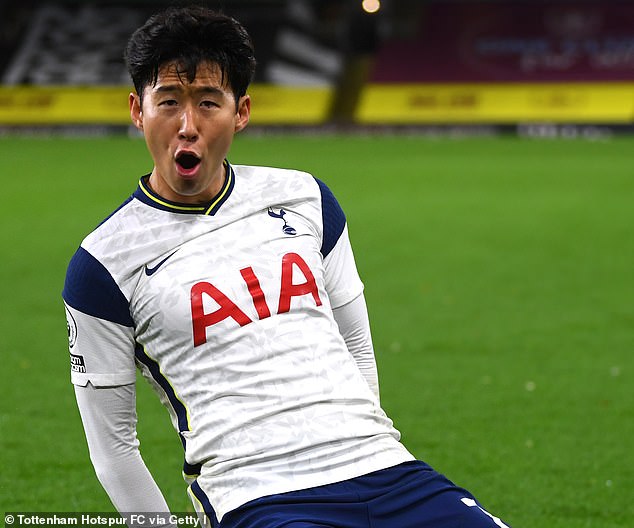 The 27-year-old has scored all but 10 of his 61 goals from inside the opposition box, showing he prefers to wait for a chance he can go at with conviction.

Usually, good fortune, great goalkeeping and any number of external factors can bring down a player’s xG towards zero and it still seems unlikely Son will carry on his current trajectory for the rest of this season.

But his skillset, relationship with Kane and brilliant finishing ability are undeniable as the stats since 2016 clearly show.

Perhaps it is time the Spurs stars began receiving the kind of recognition and adulation his astonishing output demands.