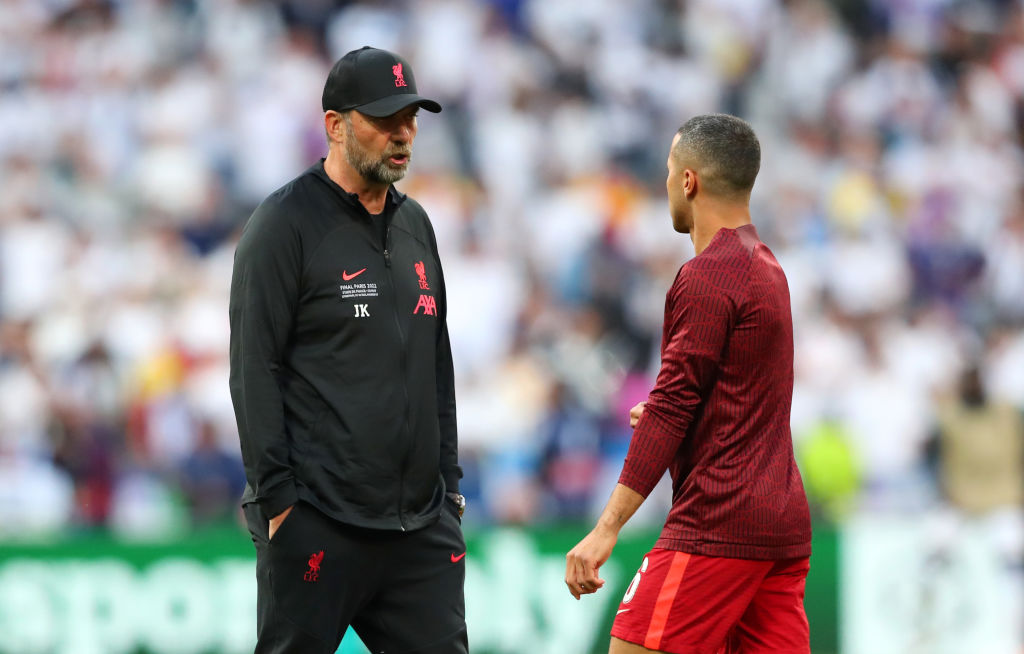 On Friday, Jurgen Klopp said Thiago had recovered from the injury he suffered on the final day of the Premier League season and was fit for the Paris final against Real Madrid.

The Spanish midfielder was named in Liverpool’s starting line-up but looked set to be replaced by Naby Keita after leaving the pitch during the warm-ups.

Thiago returned to the pitch shortly after but there remained major doubt over his fitness as he resumed the warm-up on his own and then had two private chats with Klopp.

The Champions League final was then delayed by 30 minutes as thousands of fans struggled to gain entry to the Stade de France, with reports suggesting police had used tear gas on supporters outside the stadium.

‘It looks like Liverpool had a disruption in the warm-up so the delay could be beneficial,’ Gerrard told BT Sport. ‘It’s not ideal but you’ve got to get on with it.

‘It’s very rare, if you’re not comfortable you can’t play. But what helps Thiago is you get five subs in the Champions League, that’s different to the Premier League so maybe they can take the risk.

‘But we all know as players that if it’s muscular then it’s very unlikely it will go away.’

Liverpool will aim to win their seventh Champions League and third trophy of the season tonight, while Real Madrid are bidding to lift a record-extending 14th European crown.

‘To even be in with a chance of a second Champions League title at this age is special for me,’ Reds defender Trent Alexander-Arnold said.

The noise from our end as the Reds came out to warm-up ð#UCLfinal pic.twitter.com/tkiEeZZ6cB

‘There’s been many legends of the game who haven’t had this opportunity. It’s a privilege but we have a world-class opponent in front of us.

‘You can try your best to say it’s another big game but everything around it, it’s something we don’t do regularly.

‘I think we embrace these occasions. These are the ones in your mind when you’re working hard behind the scenes. We deserve to be here.’