‘We are PROBABLY not going to win the FA Cup!’: Full marks for optimism for Stevenage chiefs as they reflect on the club’s greatest moment after shock third-round victory at Aston Villa

FA Cup magic swept unseen through the damp streets of Stevenage and left its mark with a surge in sales of the third kit worn at Aston Villa and a brisk trade in tickets for a promotion six-pointer on the horizon against Leyton Orient.

‘He’s still bouncing,’ explained one mum as she popped into the club shop to secure one of the limited-edition white shirts for her young son, while behind the counter a growing mound of online sales waited for packing and posting.

There had been a queue at the door when they opened for business at 10am and a steady stream of fans followed, all keen to relive the drama of the comeback at Villa Park, all in agreement that it eclipsed the time they knocked out Newcastle in 2011 or the goalless draw against Tottenham, a year later. 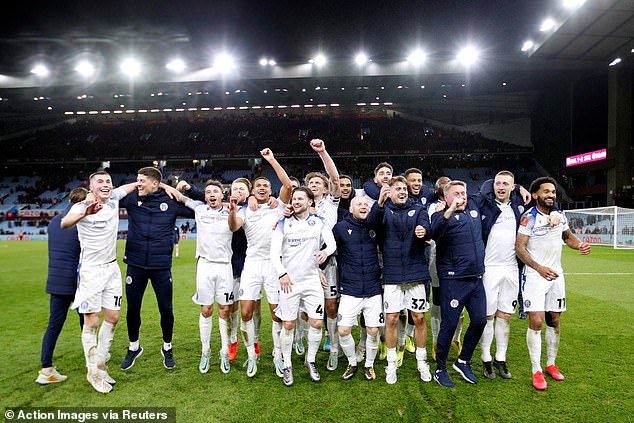 ‘It was a magical day for all of us in the Stevenage family,’ boss Steve Evans told Sportsmail. ‘For the 3,000-plus there giving us great support and for the town.

‘It’s simply fantastic because this is a town that’s been finding it tough in these difficult times and this has given them something positive to talk about as they go about their business.’

Evans and his players enjoyed a well-earned day off after the 2-1 win, hailed by chairman Phil Wallace as ‘the greatest in the history of the club’.

‘We’re probably not going to win the FA Cup,’ said Wallace. ‘It’s just a great day. It brightens the lives of so many people in the town when you do something like this. Everybody talks about it. I’ve had so many messages, it will take me a couple of hours to reply to them all. 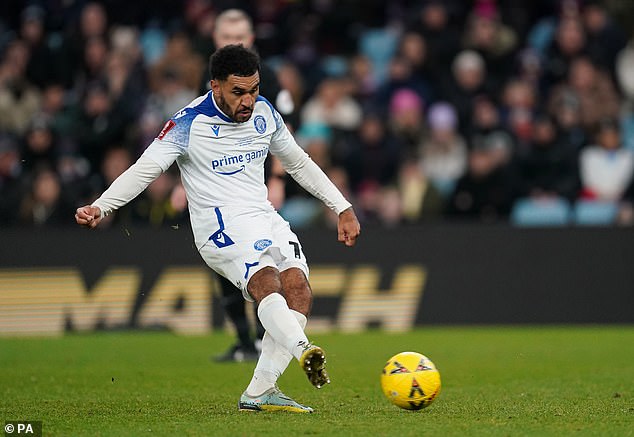 ‘It just shows you how football can touch people and the magic of the FA Cup. It’s a worn-out cliche but it comes true so many times.’

League Two Stevenage have already earned more than £300,000 in prize money and broadcasting fees from their run to the fourth round. These unexpected windfalls can transform clubs in the lower leagues but this wasn’t uppermost in the chairman’s mind on this occasion.

‘We’re not paupers,’ said Wallace. ‘We’re a well-run club and it’s finally starting to come together. Steve has done a magnificent job since he came in. We’re second in League Two. We want to win promotion. What this result means to the club is that our squad has a bit of a lift to take into the next game.

‘What it means to the people of Stevenage, to the fans, is completely different. It’s a bit of pride to the people. It’s brilliant if they can see their team all over the TV and in the papers.’ 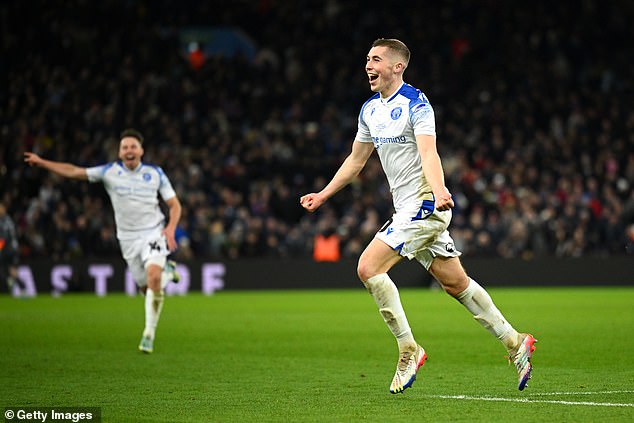 Wallace flew from his home in Florida to see the game on Sunday and made a rare appearance in the dressing room after the match, where he found 60-year-old Evans and his coaching staff fighting the urge to dampen the celebrations.

‘The mood was buoyant, as you can imagine,’ said Evans (right), whose first task was to save Stevenage from relegation when he was appointed in March. ‘The players were singing in the dressing room and we were telling them to calm it down a bit.

‘On the bus, the music was going at the back. I’m quite a disciplinarian and I was tempted to go, ‘Oi, come on’. But we had a chuckle as staff and said we know this isn’t normal.

‘Some of the players aren’t old enough to have kids yet, but I told them to record all the television footage and keep the back pages of the newspapers because, when you get to my age, you want to show your grandchildren what happened. 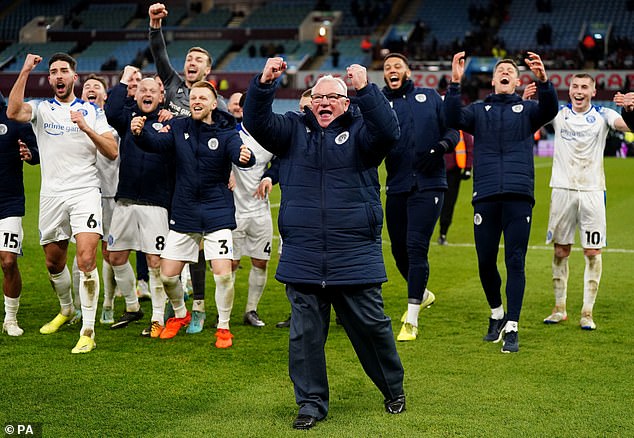 ‘I’ll certainly be doing that with my grandkids when they’re a bit older so they can understand that one day we went to Aston Villa, an elite football club, and got a truly magical result.’

Even so, there was no champagne on the team bus as they left Villa Park — as there might have been in days gone by.

‘That’s a total no,’ said Evans. ‘I was asked once or twice and I think my eyes spoke volumes. To be fair, the vast majority of players down the leagues are more dedicated than ever. They know how hard it is to have a career.’

Stevenage striker Danny Rose told Sportsmail the celebrations involved spraying bottles of water and Lucozade at each other and trying to claim a few souvenirs from the Aston Villa players. 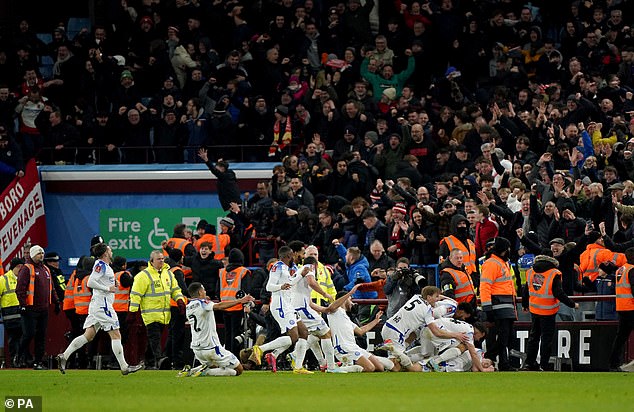 David Amoo, who started his career at Liverpool, left with the prized shirt of former Anfield star Philippe Coutinho. And goal hero Dean Campbell, a 21-year-old on loan from Aberdeen, seized the chance to enjoy a conversation with injured Villa midfielder and fellow Scot, John McGinn.

‘I’m still not sure that it’s sunk in,’ said Rose yesterday. ‘It was brilliant, walking out on the pitch in such an incredible, historic stadium.

‘I feel lucky to have played and lucky to have got a good result. It was definitely one of the big shocks of the round. It will live on in the memories of the players and the staff and the 3,000 Stevenage fans as one of the best days of our lives.’

Evans made it home to Rutland by 9pm, in plenty of time to settle down with a glass of wine and watch Match of the Day with his wife. ‘I had a couple of sips and the next thing I knew she was waking me up to go to bed.’

Today they are back at training to turn their minds to Harrogate away on Saturday.

Bruno Fernandes: I was told I would only be top player at centre half