Report as Emil Forsberg pen gives Sweden victory; Sweden’s four points should be enough to guarantee them a spot in the last 16, while Slovakia, on three points, have work to do ahead of their final Group E clash against Spain 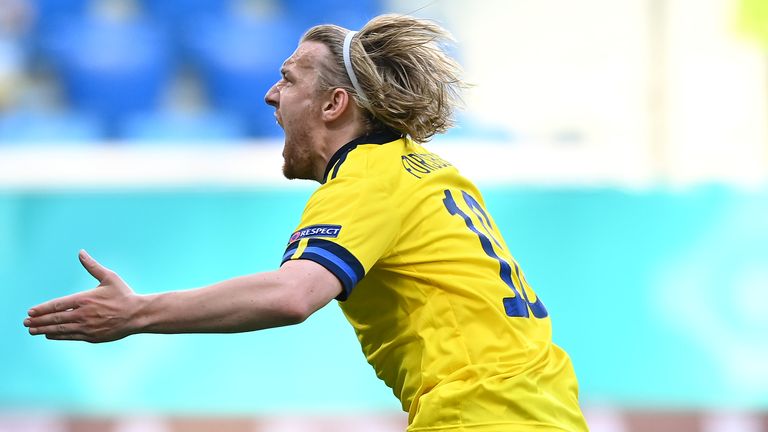 Emil Forsberg’s late penalty put Sweden in a strong position to qualify for the last 16 of Euro 2020 with a 1-0 win over Slovakia in St Petersburg.

After a poor first half, the worst 45 minutes of play in the tournament so far, Sweden upped the ante in the second half as Martin Dubravka made a superb stop from Ludwig Augustinsson’s header.

Newcastle goalkeeper Dubravka then gave away a penalty, fouling substitute Robin Quaison in the box, allowing Forsberg to step up and score (77).

Sweden’s four points should be enough to guarantee them a spot in the last 16, while Slovakia, on three points, have work to do ahead of their final Group E clash against Spain.

Man of the match: Alexander Isak

How Sweden finally got going to earn vital win

The first half was a drab affair, lacking in clear-cut chances and much quality, with Slovakia aware that a draw would almost guarantee passage into the last 16.

Sweden, who registered more passes after 31 minutes than they had in the entire 90 minutes in the draw against Spain, still showed very little in attacking areas, while Marek Hamsik blazed over for Slovakia from the edge of the box.

Even the referee had enough, calling a halt to the first half without any stoppage time.

But Sweden came to life after the break, as Slovakia sat further back. First, Dubravka produced a quite stunning save to deny Augustinsson’s far-post header from Seb Larsson’s delivery, before defender Marcus Danielson headed over in a good position from the resulting corner. The impressive Alexander Isak looked to force an opener, heading over the bar from Mikael Lustig’s cross, then skipping past two challenges before being denied by Dubravka’s near-post stop from the edge of the box.

Slovakia made two changes from the side that beat Poland 2-1 as Hromada and Haraslin dropped out, replaced by Hrosovsky and Koscelnik.

Sweden were unchanged from their 0-0 draw with Spain on Monday.

For all of Dubravka’s fine work, it was the goalkeeper who contributed to Sweden’s opener, catching Quaison as he ran through on goal. Dubravka guessed correctly to his left, but Forsberg’s superb penalty was too good for him.

Slovakia had to change gears, having sat back negatively for the majority of the game, and though they put late pressure on Sweden’s goal, they could not find the leveller.

Sweden’s final group clash comes against Poland on Wednesday at 5pm, while Slovakia take on Spain at the same time.