Socceroos goalkeeper Danny Vukovic has declared the fan violence at AAMI Park on Saturday night as the “darkest day in football in Australia”.

Vukovic has played much of his career in the A-League men’s competition and currently plays for the Central Coast Mariners but he didn’t mince words after watching fellow goalkeeper Tom Glover of Melbourne City being assaulted by Melbourne Victory fans during a pitch invasion. 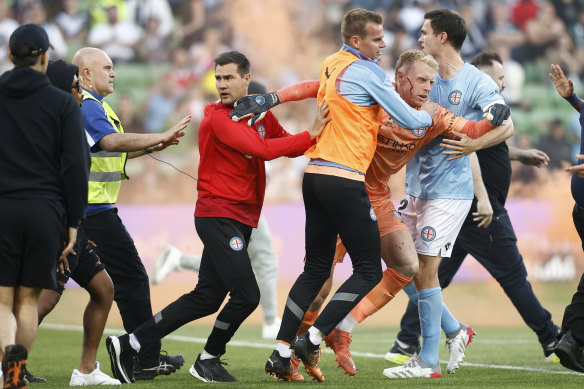 A bloodied Tom Glover is escorted from the pitch by teammates.Credit:Getty Images

The incident led to the game being suspended at the 20-minute mark and later abandoned due to player safety.

“Our game is in tatters. An absolute disgrace what happened tonight,” Vukovic tweeted on Saturday night.

“Cannot believe we are here after such an amazing WC and so much potential to see our game grow. Irreparable damage done.

“Darkest day for football in Australia.”

Glover received stitches to the cut on his head and had a suspected concussion while match referee Alex King also suffered a cut to his head after a fan appeared to throw a bucket filled with sand at Glover which also hit King.

A Network 10 camera operator was hit by a flare in a separate incident before the pitch invasion.

Victoria Police is investigating the incident and had officers at the stadium late into Saturday night.

It said it was yet to make any arrests and believed between 150-200 Victory fans came onto the pitch.

Victory issued a statement on Saturday night to say it was devastated and apologised to the people who were injured and everyone who “witnessed the appalling behaviour”.

The Professional Footballers Australia praised the courage of the players and officials who helped remove Glover from the field and said the fans involved should face the strongest possible sanctions. 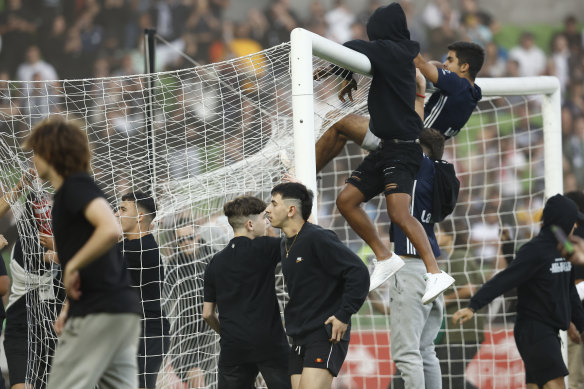 Socceroos goalkeeper Danny Vukovic has declared the fan violence at AAMI Park on Saturday night as the “darkest day in football in Australia”.Credit:

“The PFA has met with the players involved in tonight’s match and will continue to ensure they are provided with the full support and resources of the PFA,” it said.

“We acknowledge the courage of players, club staff and referees who came to the aid of each other in circumstances that no one should ever be exposed to.”

Western United and Western Sydney Wanderers are scheduled to play an A-League Men’s game at AAMI Park at 3pm AEDT followed by a women’s game between Melbourne Victory and Newcastle Jets at 6.15pm AEDT.

Leeds transfer in jeopardy due to £35m Georginio Rutter deal