Home » Soccer » ‘The sky is the limit’: Socceroos dare to dream of deep World Cup run

Doha: Can the Socceroos win the World Cup?

On face value, it seems like a completely ridiculous question. But after claiming their first top-10 scalp on soccer’s biggest stage, and reaching the round of 16 for just the second time in the nation’s history … why not ask it, just to see how it sounds out loud?

“In the end, these beautiful football stories are the ones that are written with these situations, in these moments, and it’s these things that define a certain generation, or define you as a person – what happens now.”

Degenek and his teammates were totally delirious as they walked off the pitch at the Al Janoub Stadium, the venue where they have banked back-to-back wins over Tunisia and Denmark that have cemented them all as Australian sporting immortals. 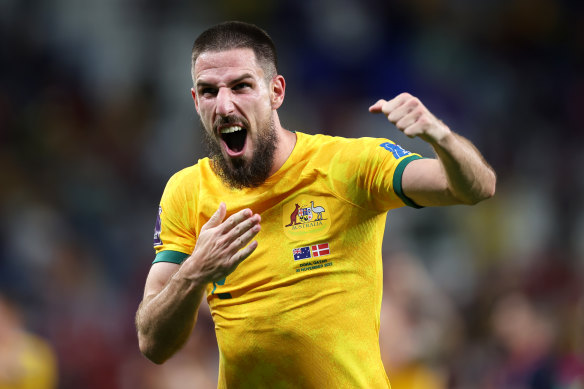 Milos Degenek celebrates Australia’s victory over Denmark to reach the round of 16 at the World Cup.Credit:Getty Images

After knocking off the Danes 1-0, and dipping into energy reserves that they didn’t know they even had, they are now just four more wins away from lifting the World Cup trophy. If they play like this, no team in the world will want to face them.

Can they do it? Almost certainly not – especially given how exhausted they all looked at half-time, let alone the final whistle. But did anyone think they’d get anywhere close to where they are right now?

“This is something probably none of us will understand what happened until we probably get home – whether that’s after the final, or whenever, until we get home and realise we got out of the group, a really difficult group, we beat a top-10 nation for the first time at a World Cup, we kept two clean sheets in a row at the World Cup,” Degenek said.

“These things are immaculate.”

Striker Mitchell Duke said the magnitude of their achievement – matching the “golden generation” of 2006, who were knocked out in the round of 16 by Italy – had not yet sunk in.

“That’s what some of the boys were saying when we walked in – like, do we realise what we’ve just done?” he said. 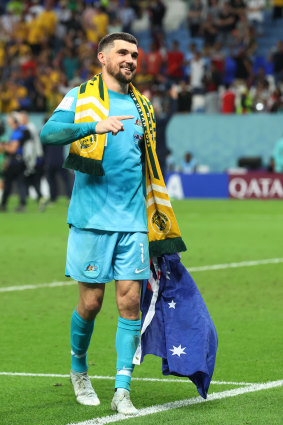 “Playing a part in history-making right now. Two clean sheets, six points out of the group that we had with France, Denmark – two world-class nations. It’s unbelievable.”

Duke, who logged another tireless 82-minute shift up front after scoring the goal that got them past Tunisia a few days ago, said what the Socceroos were doing in Qatar spoke volumes of the Australian game, the players it has produced, and how underrated they are both at home and abroad.

“I think there’s something now you can see – something really special building right now, and I think a lot to be excited about with Australian football and the players that we have … [It’s] massive, and we’re not done yet. We want to make history.”

Asked how far they could go in the tournament, skipper Maty Ryan offered a measured yet confident response.

“I’d rather let our actions do the talking,” Ryan said.

“We’ve got that belief. We’ve been able to find the right balance in the preparations until now. The challenge is backing that up every time and I feel like we’re growing, we’re riding a wave, we’re progressing, and we want to we want to keep going in that direction.

“Life and the world keeps giving us reasons to be proud of ourselves at the minute, and it’s nice experiences to have, but, it’s also great to see that we’re an ambitious group because everyone’s enjoying the victory and all that post-match, they’re out on the pitch, but the comments are already coming out: we’re not done yet. We want to keep going.

“We want to make this chapter as special as it can be. And the only way we can continue doing that is by keep having victories like we did tonight. We want to go as deep as we can, and we want to continue to make the nation as proud as we possibly can.”