Home » Soccer » ‘They’re getting stronger’: On and off the field, Saudi Arabia is a rising football power

Almost on cue, the abuse has begun to filter through on Mitchell Duke’s phone.

“I’m starting to get really lovely messages from the Saudi fans,” the Socceroos striker said with a grin, “about how the game’s going to play out, and what’s going to happen to me, blah blah blah…” 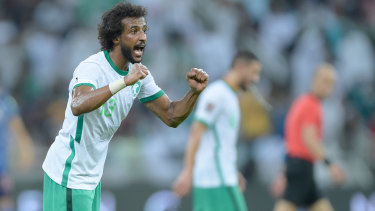 As many Western Sydney Wanderers fans will recall from their miraculous 2014 AFC Champions League run, Saudi Arabian football fans are notoriously active on social media – unafraid to proffer an opinion or two about the lowly standard of the Australian game, or how the “kangaroos” will be cannon-fodder for the kingdom.

It is, then, no great surprise that two days out from a defining World Cup qualifying match between the two nations, they’re at it again. Duke is merely an easy target for their barbs, having just spent a forgettable season at Al-Taawoun, a club at the bottom end of the food chain in the cashed-up Saudi Professional League.

But it’s safe to say the Saudis have their tails up. And for good reason: not only is their national team riding high off a nine-match winning streak, which puts them three points clear of Australia on top of Group B, but the country’s imprint on the world game has arguably never been greater.

Saudi Arabia’s biggest club, Al-Hilal – who the Wanderers beat in that famous 2014 final – have again reached the ACL decider, and are red-hot favourites to beat Korea’s Pohang Steelers later this month and claim their fourth title. 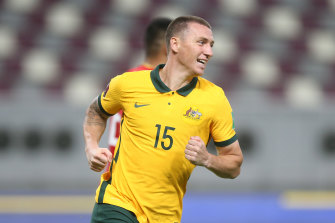 A season in Saudi Arabia opened Mitchell Duke’s eyes to the quality and ambition of football in the Arab nation.Credit:Getty

Seven players in the current Saudi national team squad play for Al-Hilal. There are no household names among them, but as a group they are technically brilliant, quick, smart and confrontational. Under French coach Hervé Renard, their trademark volatility seems to have been ironed out of their game.

That’s just on the field. Off it, the Saudi government’s Public Investment Fund has just completed a takeover of English Premier League club Newcastle United – instantly making them the richest club in football. Rumours and reports suggest the fund’s next target could be Inter Milan in Italy. 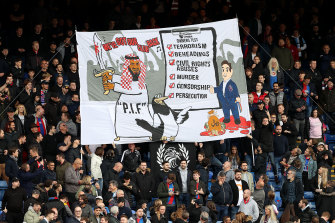 A banner made by the Crystal Palace Ultras that criticises the new Saudi ownership of Newcastle.Credit:Getty

As for FIFA’s bid for biennial World Cups – that, too, was triggered by the Saudis. It was their national federation who, in May, formally requested a feasibility study into staging the men’s and women’s tournaments every two years instead of four, enabling FIFA to begin a global PR campaign headed by president Gianni Infantino, Arsene Wenger, and a host of retired legends.

Long regarded as one of Asia’s foremost football powers, it appears Saudi Arabia’s influence on the sport is only growing.

“They’re getting stronger,” Duke said. “Many nations are, especially in Asia. We’ve got to expect that. It’s good for football in general, really, to make it more competitive.

“I’ve seen the quality that they have. On the football field, sometimes at training, they can be a little bit relaxed, and not as much intensity. But the quality they have really impressed me and surprised me. It’s a very tough league, they’ve got very good Saudi players, so we expect a very tough match.”

This is, however, the first trip outside the Middle East the Saudis have taken since the onset of the pandemic. All but one of their last 11 international fixtures have been played in either Riyadh or Jeddah – the other was next door in Oman.

Typically, they don’t travel well, while the Socceroos haven’t lost a World Cup qualifier on home soil since 2008 – and with a crowd of around 25,000 expected at CommBank Stadium on Thursday night, Duke said they simply have to take advantage.

“Home crowds can be a boost to us,” he said. “That’s why we’re excited after 763 days, to be able to play in front of a full stadium of home fans, pushing us all the way to get the result in a big game, against a very tough team that are flying at the moment.

“Some boys have not been back to Australia in two years. It’s huge, and an exciting moment for them to be back home on Australian soil. I feel like they’ll bring that good, positive energy towards the game. It’s a good game to look forward to, and be a part of, and I’m sure we’ll come out on top.”