Chelsea striker Olivier Giroud deserves praise for his professionalism this season, according to former Tottenham boss Tim Sherwood. Giroud struggled for game time in the first half of the campaign due to the fine form of Tammy Abraham. However, an injury to Abraham early in 2020 gave Giroud his opportunity to prove himself under Frank Lampard.

Chelsea wanted to sign a striker in the January transfer window and Giroud was heavily linked with a move to London rivals Tottenham.

But Chelsea were unable to bring in a frontman and the former Arsenal star has been Lampard’s first-choice striker since.

And Sherwood says the 33-year-old deserves all the praise he gets for not only his performances but also his attitude despite being out of the side. 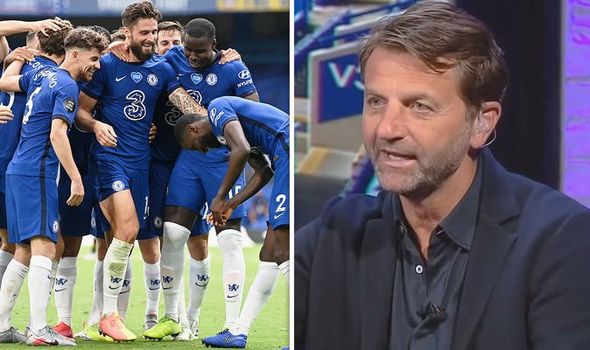 “Tammy Abraham started the season so well, scoring lots of goals, everyone thought that Frank was just looking to the academy but in fact he kept himself right, he dried up a little bit Tammy, picked up some injuries and they could not score a goal.

“So they had to look to someone who had been pushed to one side, yeah [he nearly left] but he’s professionalism has to be noted.

“Correct attitude in training, get yourself back in the side, not cry to his agent, just roll his sleeves up and prove to the manager, Frank Lampard, that ‘I’m actually still around and I’m a World Cup winner and I’m your best option’ and he’s proved that, Olivier Giroud.

“The kids are good, bring them into your squad, but you can only be as good as your experienced players and I think players like him, [Cesar] Azpilicueta have helped them out massively.”

Chelsea have already made a couple of signings heading into the summer transfer window.

But former England striker Michael Owen says improvement is needed at the back.

“I think to be specific he will look at a goalkeeper and I think he’ll look at a left-back as well,” Owen told Premier League Productions.

“I think they’re two positions that Frank’s not too happy about at the moment.”